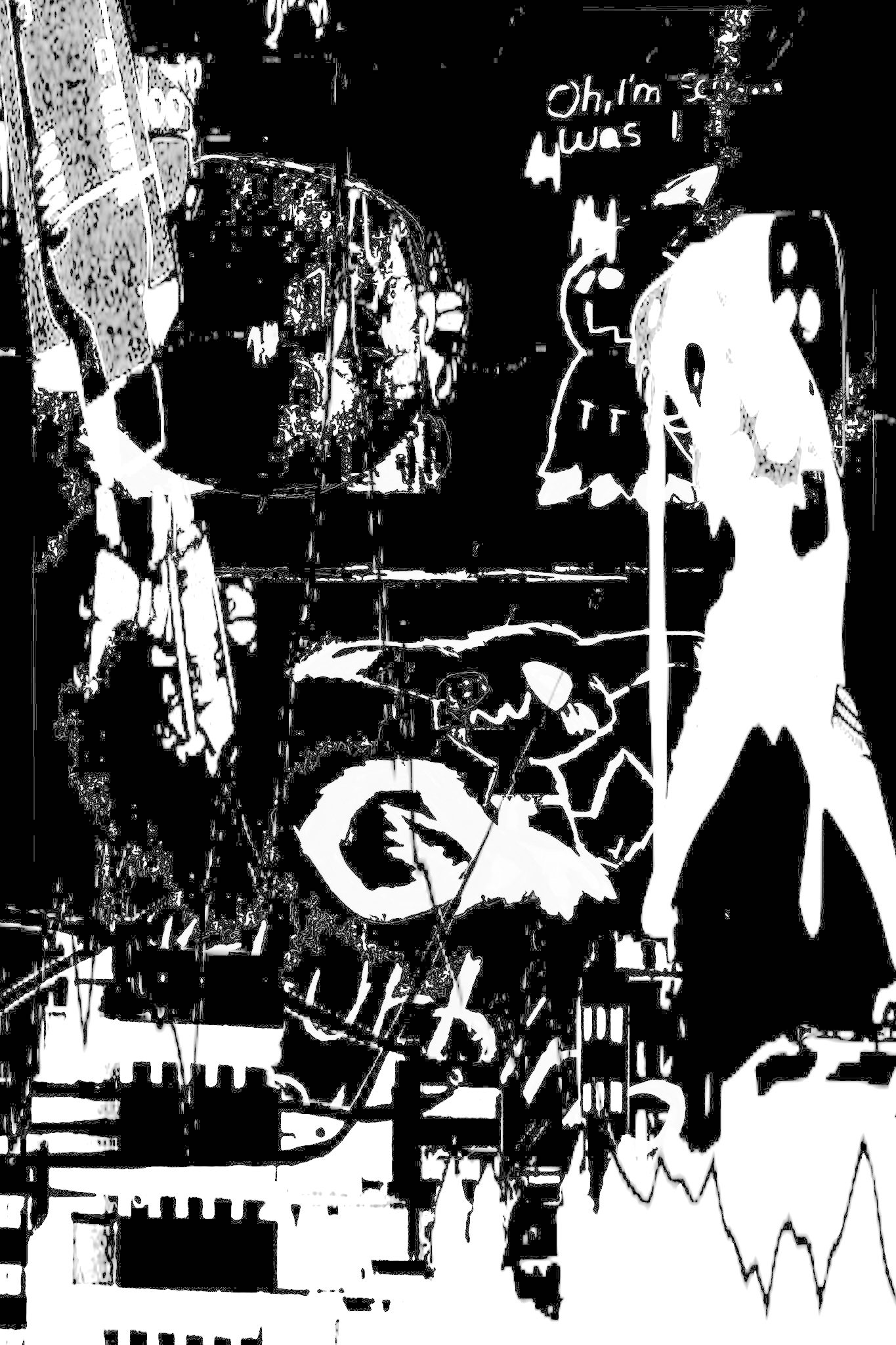 GHOST IN THE SHELL 2049, Evangelion’s Kabukicho junkie “God does not exist yet,” “God will be born soon,” “the dead will be resurrected” Nihil Unbound, the ethics of extinction is OUTPUT to the angelic device in the style of protocol::0 extinction… Uber Eats: The ADAM Project.

The automata blockchain that abolishes our sorrows in the Hangul coating of Korean-town is a posthuman complementary project to our errors, our extinctions, our blue skies!

JUNK to the sad stain Terror=1mg that overdose Luna Moth! Hyperstition hyper than hype and further than the future fin de siècle and post-apocalypse to rape the sun BwO to ragged singularity/ E-Mo-I Neuromantic/ Wintermutant Triskaidekaphobia

The color of the sky in the port was the color of the TV that matched the vacant channel… BRAND NEW LOVELESS… Deja-Vu BAD TRIP infected with the iPhone mechanical meme of angel holic of Sekai-kei… “God does not exist yet” “God will eventually be born” “The dead will be reborn” Posttruth cold mail to blockchain to EXIT from SNS to annihilate “Genocidal Organ” XXX killing Nijiyome-chan IDOL :Mode: Shimabara Rebellion in 2020 ant awakening wolf planet Mega industrials accelerate to mega-capitalism See, rape, See, dancing in the awakening 2-chome club Black-light glowing tattoo of jellyfish screams love at the center of the world the Purple Haze of Is the Imperial City Hue burning in the Vaporwave of the Drone Emperor Khải Ðịnh?

Trump Riot: abortive coup d’etat/domestic terrorism of alt-right is a singularity of The Flowers of Evil Pope Trump Nick Land says ‘Accelelate capitalism. There is Outsideness of capitalism overthere.’

Bible junkie androgynous-centric COVID-19 era’s stigma Brand new BDSM-like godless posttruth BRAND NEW LOVELESS fascinated by you with morpho eyes I am a sinner in Eden LUNA SEA’s HAKENKREUZ HALLUCINATION in 1999 I was roaring in the club full of Xtasy, in 202X I’m praying for Maria who had an abortion of Jesus

On the day the second state of emergency was declared, a terrorist attack – the Capitol riots instigated by Trump – took place in the United States. As usual, Corona is restless. I’m writing this sentence in a dirty room. The shells of convenience store lunch boxes have been thrown away, feathers are sticking out of the down comforter, and mushrooms are growing out of the quilt. Well, listen up: on the 8th, Twitter permanently froze Trump’s account. On the same day, Google and Apple suspended the distribution of apps for the conservative social networking platform Parler. The social network now has more power than the president. I threw away the trash. “To speak through the experience of death, and to know that one is dead, is the origin of art” (Philippe Lacoue-Labarthe). Anyway, capitol attack is Thanatos, that is death drive, which is the desire to go back to inorganic material or metra.

t.A.T.u. tattooed Kyrie Eleison is a terror of sadness that the heat haze of the first day of the 13th month of Reiwa s[K]ape:goat!

Take some chemicals like Red Pill. There’s no Black Pill for MGTOW of Anarcho-capitalism. Accelerate capitalism, so that Outsideness will show up. Purple haze of Black Russian was seen through conglomerate Babel=skyscrapers. I can’t see it anymore because the rave of Angel Dust deranged my brain to Anti-Natalism.

A paranoid fetus howls at the moon at midnight in a toxic corporate DOPE rosary with an Artificial Humanic Body Exchange Suitablishment. A male prostitute = boy doll stands on the street wearing blue lipstick. Today’s moon is blue. He, too, is obsessed with the neuro-gambling economy. I light a cigarette. Purple smoke rises up the skyscraper.

Hypnotic Poison Russian TikTokers in Cyber-Goth Eden are Angelholic/Angelphobia I pray for Maria in the club full of Egoist Platinum’s Xtasy reminding me of next World War which smells like Final Fantasy’s LOVELESS My life was vanity, in which I love Aerith Gainsborough

A boy with blue rouge is a puppet in the dance floor at X’mas GIG Drag Queen shuts up at Halloween night of Ave Maria in which iconostasis does sugar daddy dating of vanity syndrome of Comintern Is Hue burning? VR of Nguyễn Dynasty is the Annunciation making the fall of capital of Áo dài as Shinto prayers Guǐchéng as new century’s Oedipus is GAFA’s bibleholic ex cathedra like médaillon of love engineering

Nihil-AI of Post-Apocalypse Sun Nomads Androgynous-centric post-truth “nothing is true, everything is permissible” vanity syndrome with ant mg X exhausts!? We don’t have the wings to fly.

QAnon’s Canon is Apocrypha of Asexual Angel Tet in Vitnam holidays began at 12th February, 2021 Twitter is Angel Dust of NieR Re [in] carnation, in which replicant/gestalt overdoses X automata

Synthetic Anthem of Isola’s 5ch: mode is Last Bible of a jihad of NRx VS ultra left I’m listening to Ex:Re’s Romance as a memorial to the club scene that is about to be buried