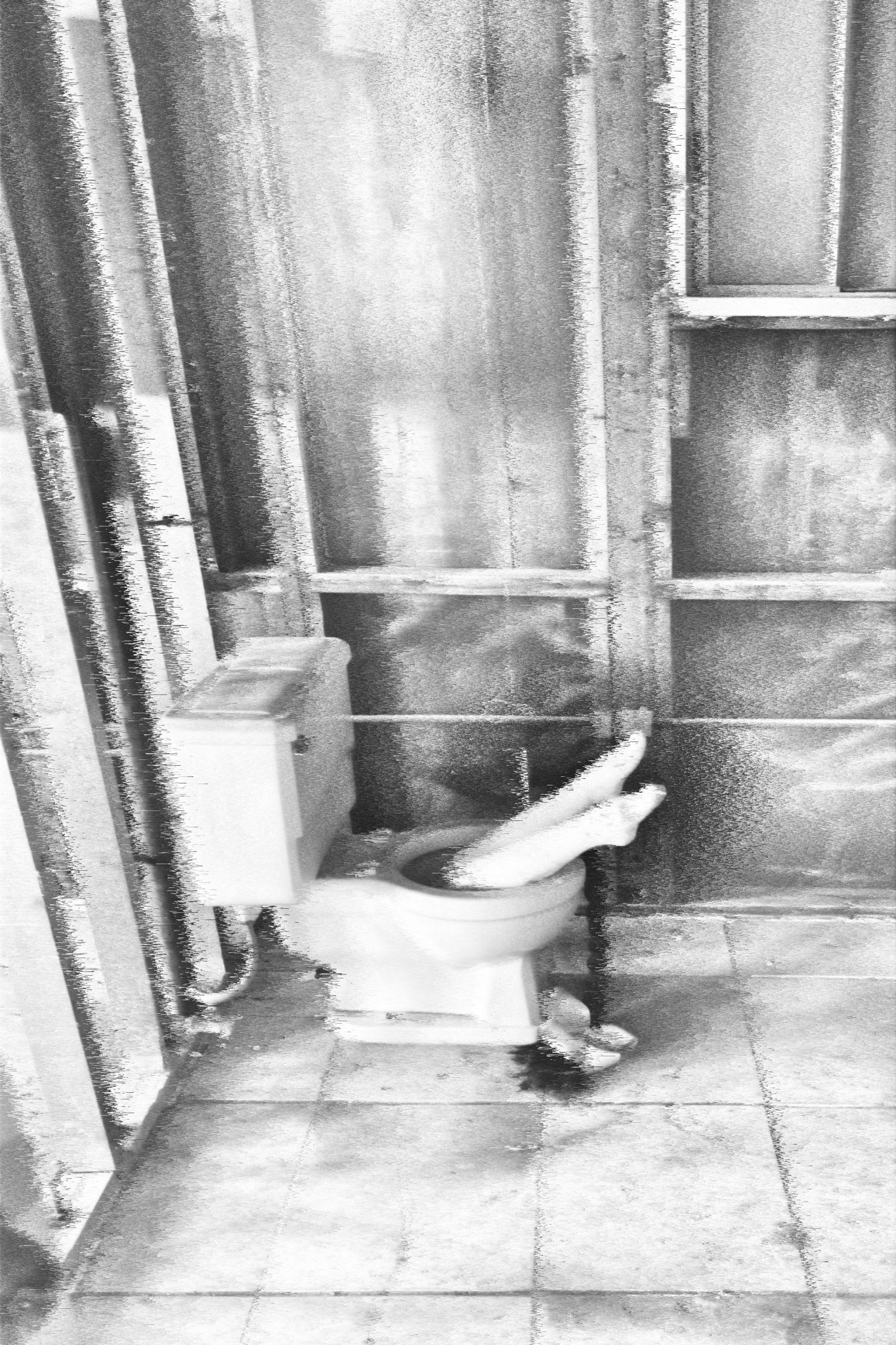 Now the desk with a gap at the middle, to piss in, that made all the difference, so we thanked them, our legs slid, to the latrine, at this point, where we shat, a week for nothing and the puss, excuse me, or not, but appraise me, my eye, the puss and that, if that, would not address the sty with words, never if, we had them, all of us, two centimetres off each shoulder was enough to fit the desk, looking at each other with eyes that did not see, like yesterday, so they prescribed a shoulder crunch, and something for the glutes, and another thing to sit on, a brass head, cut from the statue at the centre, it fell on my plate together, with the shit that runs down the side into each ear and over the nose, from birds, this bird was dead when I returned, with a bit of web hanging at the neck and its last wet shit on the floor, white urea I’m said, in the web at the neck, long the beak, the web, a creature all eaten up inside and dusty, so they say do ins and ups and the sway to feel better at the desk, no, uric acid, although the best of all was neck retraction, I did in meetings, the sty leaking still, but we all had them, pissing at the middle part that made the difference, four legs and my own in the latrine, today looks unlike yesterday, like then, the sty makes it due to the puss, on the cornea, nothing having changed except that, and the desk, not to forget the latrine, I had forgotten the latrine, that is how my legs slipped, the brass head no shoulders to rest on, so they slid, I forgot that too, in that it might happen, the blue stuff they put in the waste below get on my toes, a better way to sit is with each heel in the eye socket, but they prescribed heel lifts and so I pulled them out, we thanked them mightily then looked for something else that would help, like the death of their world. Our heels slip, we found ourselves, and wading, for good measure as they said, the desk at the centre sat, blue toes, the death of their world that would, it taught us the functional use, and made us dead, at the desk, with five minutes left, the bird itself was dead when I returned so long, the death of their world indeed. A boil in each socket, the crack with moss growing out two beetles pressed into themselves, pulp at the edges, inexpediencies and taken to task for no particular reason, on the soil pipe, appraise me, pass on their apologies to the group, lines, given, lines, think of what we have missed, appraise me, think ahead, of that, and communities that tell themselves they are communities, I am never entirely sure who offers what, they repeated, eyes turned back, the bladder and the pressure, better to piss and not wait, piss every hour, the desk has a hole after all, runs down the head, each minute the piss and professionalism, it would have been purposeful, anyway I piss, work the bit by the other, heighten efficiency, blue fingers, black heels, sink towards the hole in the desk, neck retracted, two feet, five hands, one foot, pushing a film across the surface, it helps to know, a history of what, fuck, language develops later, in any case, keeping sane and solvent no matter that, a hard seat, brass head makes all the difference too, there, the what, a boil in each socket for better suction, appraise me, fill in this form, get better, get worse, find another thing to say, kill it, say nothing, who that, black toes, blue heels, lines, given.