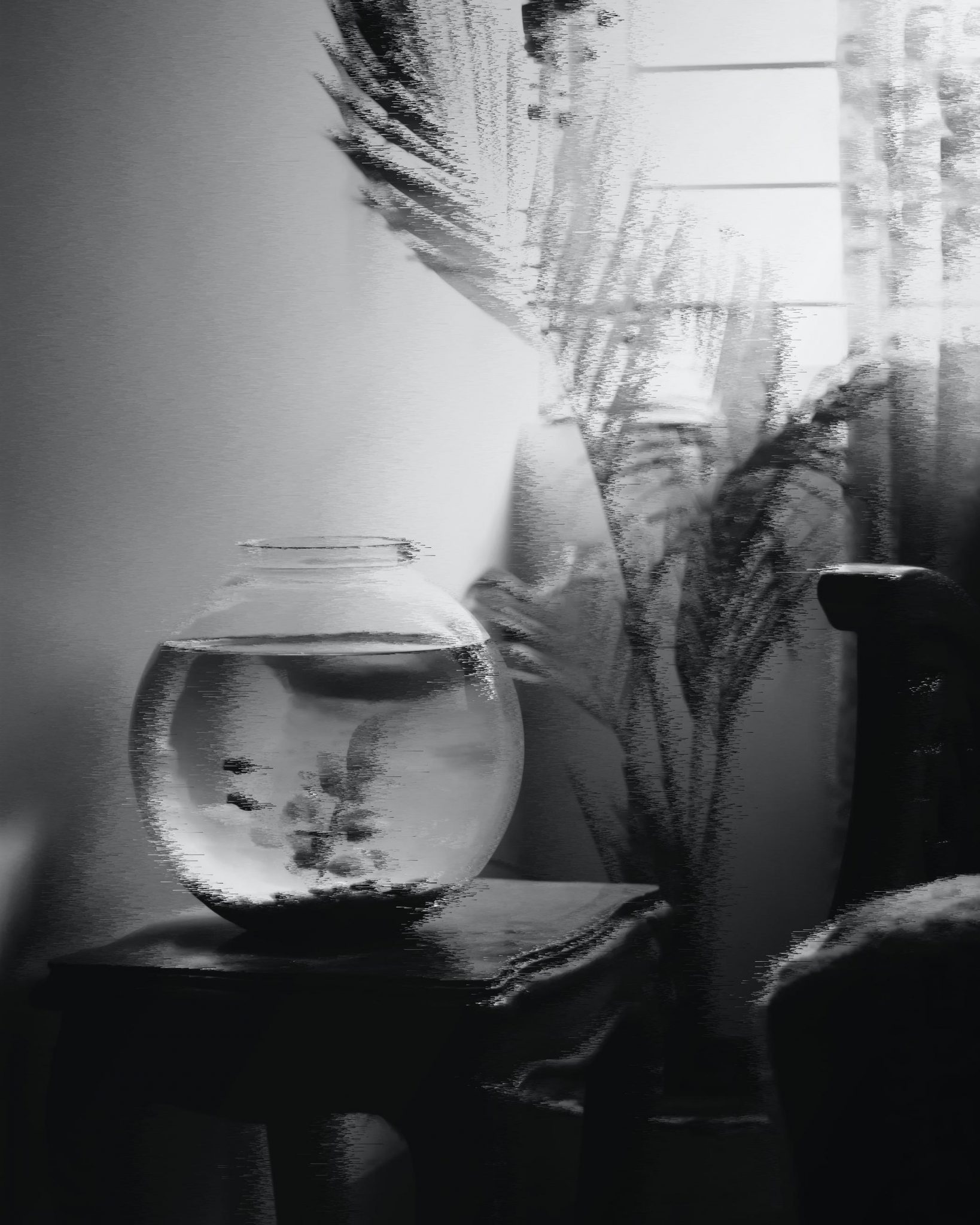 I stared at the fish swimming around their bulging blue tank and wondered if their teeth ever hurt as well. It felt strange still going to a pediatric dentist but I’ve never been one who enjoyed making changes. Besides, I liked the way their office smelled like my grandmother’s old house. It must’ve been a few months since I’d been to my grandmother’s old house. I think she sold it 4 years ago. I never got to say goodbye to it. Goodbye, house. I’ll always remember your smell. I’ll always remember it as it’s the same smell as this dentist office. Other places smell like it too, like doctor’s offices, therapy offices, elementary school classrooms, banks and libraries. All places that I’ve spent a lot of time in. All places where you might find a fish tank and where they generally like to keep the carpets clean.

I’ve been trying to keep in better touch with my grandparents over the years but it’s been hard because my tooth has been bothering me. My grandmother tried to call me today but I didn’t answer. If I did I would’ve had to say sorry my tooth is bothering me and she would’ve started worrying. I think it’s better to keep people guessing than worrying. She could guess that I’m doing fine, school’s going fine, I’m still only 5’2” and no I haven’t put on any weight. She may even guess that my tooth is bothering me but I doubt it as we arent that close. I haven’t spoken to her in 2 years.

There are many things my grandmother doesn’t know that she could be worrying about. That I’ve recently picked up smoking again is one of these things. I used to smoke until I quit and started smoking again. I’m not addicted now like I was before I quit no matter how hard I try to be. I smoke like I’m addicted though, thinking every time I find myself somewhere without a cigarette is a time where I’ll start to panic and worry again. This is the reason I’m now addicted, which is something I can worry about and leave my grandmother out of. This is also why I don’t go to my grandmother’s house, as I wouldn’t want to taint its smell with cigarettes.

I wondered if the fish remembered what their grandmother’s house smelled like. Probably like clean carpets like mine. I guess if I was really curious I could just go up and ask them but I’m a bit of a shy person. I wasn’t always a shy person but as I’ve gotten older I’ve gotten less confident in myself. When I was 5 years old I used to go up to any old person and start a conversation with them just because I was curious. This used to be fine, as I was a kid and all, but as I got older I was told more of the dangers of going up to any old person and starting a conversation. So I became shy.

Another thing I did as a kid was pretend to smoke pencil grips like cigarettes. I was doing this one day when a girl came up to me and told me if I pretended to smoke now I would end up smoking later. Ya right, bitch, I thought to my 6 year old self. Now it is later and I am smoking and I’m angry that that snarky bitch was right. I wonder if she ever picked up smoking as well. I wonder if she gets cavities all the time and worries about the fish. Probably not. She’s probably calling her grandmother right now, scheduling her next visit to smell her house.

The dentist came out and told me she was ready for me. After going here for such a long time, her face makes me feel like the smell of my grandma’s house does. Maybe this is why I always get too comfortable here and start to fall asleep in the chair, even if she has her hands in my mouth. I hope they don’t think I’m the kind of person who likes to fall asleep with someone’s hand in their mouth. Although, who knows, maybe I am and this is the only chance I get to do it. But if that was the case I probably would have been a thumb sucker, which I never was. I used to try all the time but I could never get the hang of it. I was always jealous of how peaceful people looked when they were asleep with their thumb in their mouth. I’ve always had trouble sleeping, so I was really just trying to find something to help myself be a better sleeper. Besides my chronic cavities, this is another good reason why I should come to the dentist more often.

Sleeping has always been difficult for me because I am a very self conscious sleeper. I used to think I was a teeth grinder and that was the reason my teeth were so weak, but then I realized I always sleep with my mouth open so this wouldn’t make sense. I don’t like this about myself, as I don’t think people look too nice when they sleep with their mouths open. I have also heard rumours of spiders crawling in your mouth when you sleep, but this is something I try not to worry about. What I do really like is drooling because it means you got good sleep. Sometimes when I’m trying to go to sleep I let out a little drool to try and trick my body to get better sleep. This has never worked. Maybe if I got better sleep my teeth wouldn’t hurt as much as I’d spend more time with my mouth open.

“Do you smoke?” asked the dentist.

“I used to, but then I never quit,” I told her. I wouldn’t want to make her worry.

This constant worrying often sends me to the doctors. Recently I was worrying so bad that my doctor decided to run a bunch of tests just in case my brain was making me worry about some previously undetected disease. This was on my 18th birthday. The woman who took my blood told me about the time she was almost raped by the tow truck driver on her 18th birthday. I, too, had just needed my car towed. After the tests showed up negative for everything I started spending a lot more of my time in therapy rooms.

My old therapy rooms did not have fish tanks but my current one does. I try to take pictures of the fish but the light reflecting on the tank ruins them. The receptionist laughs at me. I used to spend a lot of time talking and crying in therapy rooms but now I go for more awkward silences. I often find it easier to open my mouth at the dentist than at my therapist. This is the case because it is much easier to reveal a cavity than one’s thoughts and feelings. It’s easier to say ahhh that to say AHHHHHH! There are many reasons to open my mouth at my therapist but it’s rare that I am able to. I could tell him that I have bad weeks. I have had years worth of bad weeks. Bad weeks look different nearly every time. Sometimes a bad week looks like forgetting how to sleep at night. Sometimes a bad week looks like cuts on my legs. Sometimes a bad week looks like dirty carpets. But it’s often too hard for me to open my mouth. For this reason my therapist thinks I’m getting better. What he doesn’t know is that I just don’t want him to worry about me and would rather keep him guessing.

This is who I am, take it or leave it.

“Gas or needle?” asked my dentist. This startled me, as I nearly forgot I was in a dentist’s office and not the last chair of death row.

“Gas,” I said. I chose gas as I’d never had it before and thought that would be what a more spontaneous person would do.

I’ve always wanted to be more spontaneous. Sometimes I wish I could be someone who walks up to any old person and starts talking to them. That someone probably keeps in touch with their grandparents and finds more things to remember about them other than the smell of their old house. They probably go to an age appropriate dentist, too, and don’t spend all their time trying not to fall asleep with someone’s hands in their mouth. Or worrying about how to approach the fish.

As she prepared the gas I worried that I might never wake up after going under. Oh, the horror. My final moments in life being nothing but a string of useless thoughts at a routine dentist appointment. But then I realize that now would be as good a time as any to die, as at least no one’s worrying about me right now. Right now everything is just fine. Right now one could call me happy. Besides, I may finally achieve a peaceful sleep at the dentist with somebody’s hand in my mouth.

She put the gas around my nose and mouth. It smelled just like my grandmother’s house, another thing to add to my list. Inside my mini coma I dreamt that I was watching a squirrel build his den. He chewed off twigs from the limbs of the tree around him and dragged them back to his spot of choice, stacking them in seemingly random positions, yet somehow creating a dome-like shape. When he would drop a twig on accident, he would stare at it lying on the ground for a while before scurrying up a branch to select a new one. He turned to me and said, “I often feel like I’m getting it all wrong.”

I responded, “I was thinking we’d just play it by ear for now.”

A gust of wind blew through and destroyed his home. I watched in envy as he got to start all over again.