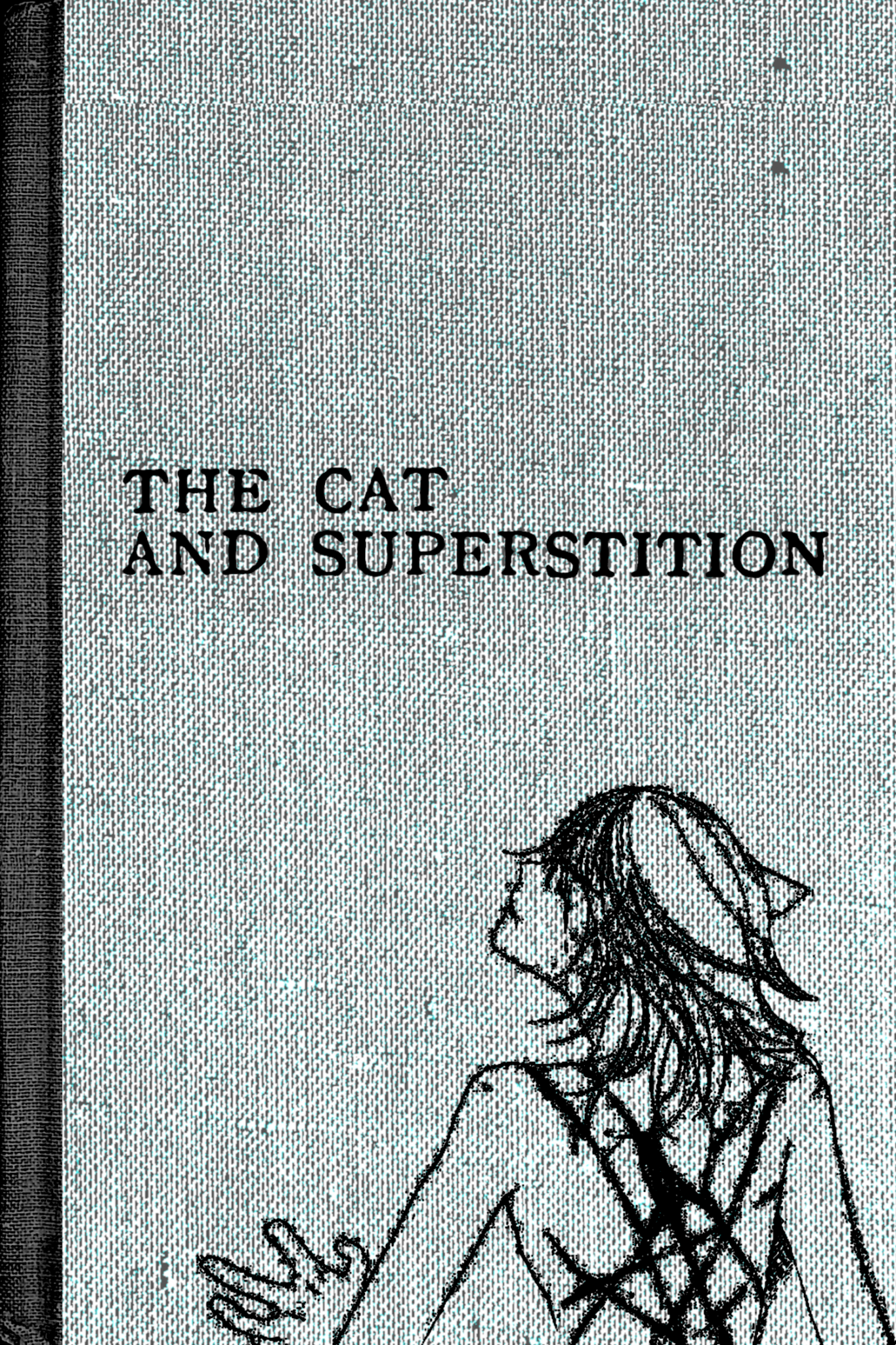 The Catboy Is Deceitful Above All Things

He’s some kind of guy. Imagine a sacred kind of guy, the last kind of guys of his kind, sitting on the curb of streetside Walgreens on a sweaty Friday night. He’s licking his shredded skaterboy elbows with his spiky tongue, stimming off asphalt grime wedged in his teeth. Sadly they’re all fake because he got a septic gum infection in catboy school. He’s walking to Walgreens on a Friday night to buy sugar-free gummy worms for Saturday’s hangover. Some kind of guy, if you can imagine this kind of guy, who tells people to kick him because he’s soft and lacks self-esteem. He’s hates the surveillance cameras stalking him from street lit supermarkets. It starts snowing on the way home. He’s the last catboy and he disgusts everyone.

The last catboy explains to the Walgreens cashier he’s new to the neighborhood. He’s wearing a face mask so no one sees the staph infection serrating his catboyskin a raw sanguine. America’s last catboy simps for the nice lady, with blonde hair like snow from heaven sticking to the branches of dead trees outside. He steps on dog shit staining the concrete sidewalk.

The sugar-free gummy worms cling to metal hooks in the sweets aisle. They make the real-life crinkling noise he hears in ASMR videos. Only he can hear this resemblance with his special catboy ears. The supervisor is watching him. The last catboy stands paralyzed pressed up against the cool plastic wrapping. Sucrosed, eyeless worm faces bulge, sucked into the shredded sphincter of a sodomite spectator. Leave, they whisper, go go.

Wouldn’t it be kind of funny, he sometimes thinks, if the worms had eyes — he thinks it would be funny if he tells the cashier this joke — sugar-free gummy worms should have cartoon googly eyes, the kind you shoplift from craft supply stores. The last catboy shudders. The automatic doors seals shut behind him. This is his stop. 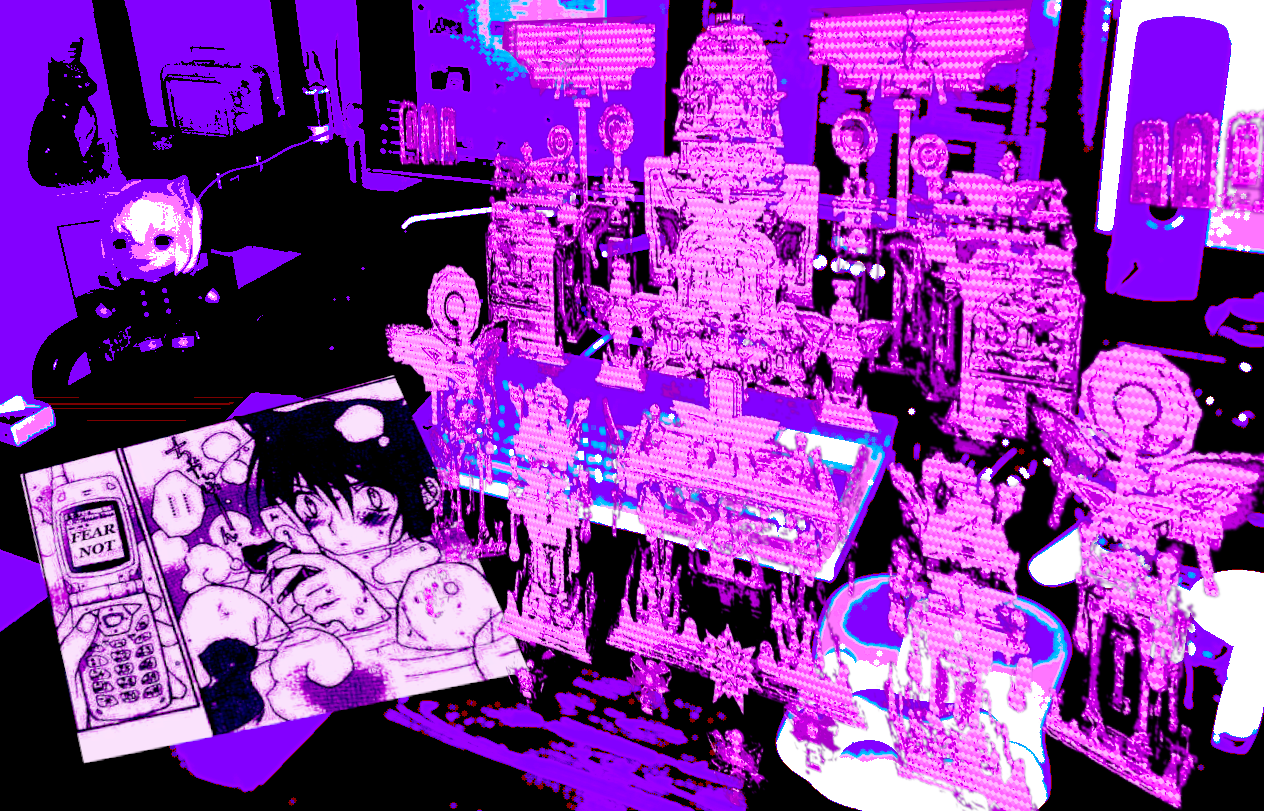 Portrait Of The Catboy As A Young Roleplayer

I accidentally locked myself out of my car. A last-minute phone call sends me to a friend who loathes me. The locksmith guys open in the morning, I tell him, I’ll leave by eleven. My loathing friend gives me his old college laptop to distract myself with. My favorite board on Leopets is slow this Friday night. No one’s logged on. Usually, I start a thread myself with a simple one-line opener: A mysterious, luster black and silver cat with a dagger leaps down an alley with a labored gasp. Tonight’s a full moon. I linger on the sentences, wondering if there’s enough lusty intrigue. Send it anyways. A little blood is enough for most leeches.

I’m pissed no one will roleplay with me on the Leopets board. I delete my lonely thread. I skim other lurid roleplays. Posting frequency is slow. But it’s always the same kind of guy posting. I know this kind of guy on the board: he has all his info in his signature, luxuriously taking his time writing twee-lettered replies. He composes bibles demanding an arcane, profane literacy from all. For the Leopets roleplay community on a Friday night, this kind of guy is really just a kind of leper. He might hold the record for most social crimes on the Leopets roleplay board in history. I reply [ur are an elitist pr1ck] and I wait until he answers [don’t post in this thread] — that scares me. I log off. I don’t post lechery for kicks. But this kind of guy loves to do it to me, specifically, the lamest catboy ever born.

Catboy That Fears Not

He saw a guy sorta like that at the back of the laundromat. Catboys sorta stink. This is something they didn’t tell him in catboy school — everyone can recognize your vulnerable scent. So, he does his catboy laundry on Friday night, expecting nobody.

Laundry is for burning off the catboyskin stench, which smells like thin turpentine concocted from thorny hair and sweat. A laundromat man asked what a fucking catboy was doing here. But he’s the kind of guy who can’t talk to men without going off on tangents. This is because he was always told catboys were retarded, thick in the skull, couldn’t understand the concept of metaphors. But, in that moment, he was too caught up in the ways people thought about catboys today —

“…In our culture people view themselves as being in control over animals, plants, and their physical environment, and it is their unique ability to reason that places human beings above other animals and gives them this control, CATBOY CONTROL IS UP thus provides a basis for man is up and therefore for CATBOY RATIONAL IS UP.”

When he tried explaining, the laundromat’s last catboy drew this diagram: 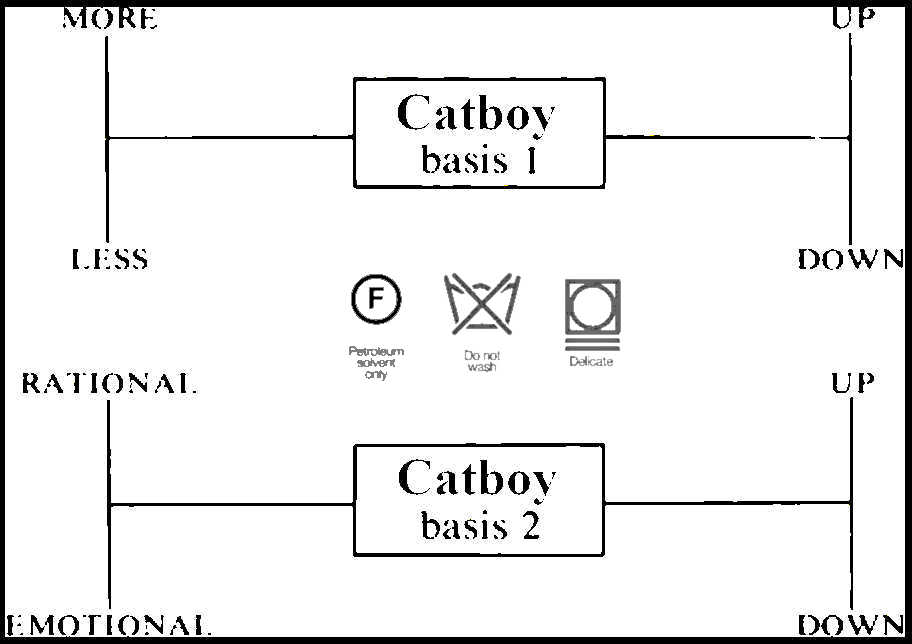 MORE CATBOY, he told the stranger as the dryer machines toiled, IS EQUIVALENT TO FEELING UP A CATBOY. A tenuous wash cycle hummed. This got a laugh from the stranger, who told him he reminded him of a TV character, a tenacious crime drama transsexual-type. Tony the Tiger Toprano had a miniature Virgin Mary on his bedside, the stranger said, so Toprano believed in the worship of false idols. This alludes to the typecast catboy actor Toprano meets later, who smashes the tiny figurine against the wall and uses the shards to slice his wrists.

A RATIONAL CATBOY IS NOT UP TO ANYONE’S TASTE. Imagine a kind of guy. He says catboys don’t get cable, so it’s above him.

The last catboy in the laundromat couldn’t believe in shit unless television gave it a face, name, and tactile texture. He stole the words these guys mixed with harsh chemical aluminum deodorant — anything to tessellate a catboy into tabloid-ready mosaic catboy. LESS catboy? It was not UP to him to decide. The last catboy told the man goodnight, he was feeling “run down,” that this was a thrill. This time, catboy smell stuck to the air like tar-tar on teeth, all over the tiled flooring. Outside, the catboy heard a scream, the tell-all threat of touch refused. That night, he dreamed of totalitarian, frustrated-fetish denial-feeling on cleaner sheets than usual.

How The Catboy Learned To Love The Bomb And Love Less

Yaoi paddle and AK-47 in hand, I have all the dope and cash to change the world. No, this isn’t another manifesto. You’ve read enough of those. I cooked up some DIY bombs…welcome to my twisted mind lol.

My name is R and my partner S and I are on a mission to assassinate the Koch brothers. We’re in a bullet-proof van cruising the interstate highway hugging the New York state border. We are domestic terrorists, but like, cute. We are going to the big city to crush rich skulls. My head creeps out the window — humid air bubbles whip the side of my cheeks. One lash after another hits me. I’m your underage masochist, I moan profanely. This is how I see his fear from the driver’s mirror. I already know, S clarifies.

That’s the point, I cry, I need to know you know. You always know that kind of guy.

The paddle was confiscated by S from a comics convention. This was our first weapon. We proceeded to hire escorts that night for intel on the whereabouts of the Koch brothers, paddling them then until delivering a final crack upside their head. No luck. The gun came shortly after that. I told S everything: who hurt me and who violated my catboy body and this is why we are two people with good motives.

When S knew a guy who knew a guy that’s how I ended up so dazed and confused. We’re not gonna kill anyone. He undressed me. I’ve never fired a gun in my life. A catboyskin scar won’t heal. But we’re doing this to crush my fear. I learn to hit myself instead. It is cathartic. S liked me.

I tell S we must use the bomb. He didn’t argue. It was Friday night in our hotel room. Okay, he says. He set it up in the artist alley. I’d push the trigger from afar.

S is ten years older than me, but people never ask why we’re together. It’s because he knows my brother like I knew him. No one tells a catboy he isn’t supposed to know a kind of guy in that way. He can’t know the guy who makes sure he can’t name what real, disfiguring pain feels like.

Fire sparks in the bomb’s ignition chamber. My skull squeezes between the pinch-openings of my ear canals. First the cochlear nerve starts sending ticking signals to my catboy brain. Then everyone is running. The blood, real hot stuff, starts to coagulate on my white fibrous scar tissue. I screwed up. I’m burning until my dear S drags me out screaming.

Friday. In a motel my tail coils and I experience my first seizure. The episode splits open the bathroom mirror. My name is R and I’m soiled in vomit and sweat, scraping off debris knotted in my hair. No paddle, no gun, and S is gone. No bomb. Who can I be after this?

Will I ever be — no, this sucks.
Forget I told you about that stupid guy.

This idol had a unique silhouette with two pointed ears, a zig-zag tail, and a penchant to speak in a slurred pirate accent. Fictionalized intoxication and real catboy sabbaths are indistinguishable. This was none other than Long John Silver born from canonical catboyskin. His design was identical to any truck station’s fluorescent interstate sign — the urmascot, re-appropriated for the intents of the Catboys of Charles Crumb to die under his loving eyepatch and join Bobby in heaven.

Hell does not exist for catboys, as long as they don’t know the kind of guy who knows about hell. Avoid that kind of guy.

The CIA promised to cover up the Catboys of Charles Crumb if they did not disclose their experimental surgical testing. The CIA, who knew every catboy by name, determined they were no longer citizens of the United States. The post-catboys of the church were assigned serial numbers and buried anonymously in mass graves.

Before the mass suicide, the CIA gave everyone a piece of Driscoll’s hair, a gift from the CIA’s own Disney Vault. This came from a relic collection set aside for the long-awaited investigation of Treasure Island on Betamax tape in the eighties.

The Catboys of Charles Crumb said their goodbyes to Johnny, clutching wads of boyish hair with the utmost saintly serenity. If you were quiet, you’d hear the ticking of the clock strike midnight as catboys palmed the locks of a kinder god abandoned young, just a child when it happened, when it all burned down.

The last recordings of Catboys of Charles Crumb were not distributed. They returned to the Disney Vault, buried among the remains of Bobby’s ashes.

The Catboys of Charles Crumb shared a communal living room in a subsidized housing project in New England. They each took turns practicing not touching catboyskin until they reached a sabbath stillness. This manifested a naïve dæmon, the last catboy: Advent Bobby. He was run over by a bus outside Walgreens at age 29.