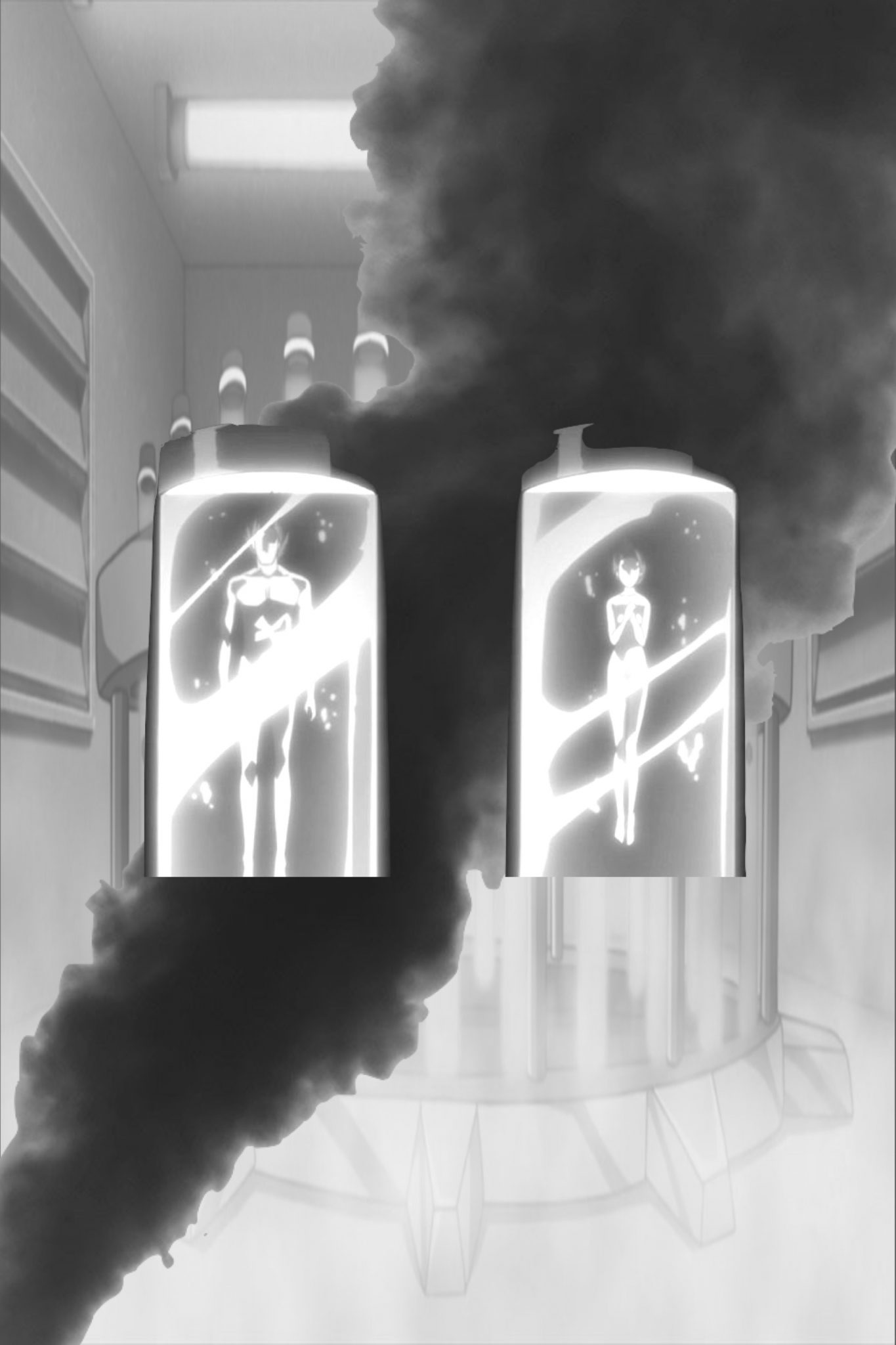 Visions of a ripe split moon. Noxious clouds cleave salient sky. The atmosphere enclosing the city shimmers like a translucent image of ghosts. Reverberations from remembering yet to occur. Ambrose leans on a side-hucked vending machine serving SM-147 tabs to a pretty crag of adolescents. Boots rigid amid the darkening grey of tremulous lines. Acute provisions harbor genuine remorse beneath grids of dripping expressway beams. Tarnished clothes, pockmarked skin. Teeth reem in sockets like an Inuit high on the flesh of baby seal. Just like old times. Would like to ask, would like to try: ‘Could I get a dollar kid? How ‘bout a dime?’ Vaporous pens excite faces. Holographic flames lick subterranean space. Shadows hurl themselves on wet, glistening concrete like invocations of hallucinogenic night terrors. Tough luck endured by the participants at Omni’s radar station. Those unwitting lucky-enough-don’t-you-know-it bystanders tapping wearables against the cold metal interface desperate for a dose of midnight cardinal.

Consciousness awns like a blown-out circuit. Twitching stimuli register in the peripheries of the machine’s reptilian Hivemind. Ambrose is observed, yet not afraid. Ambrose keenly aware content farming of this remnant society is still not out of beta mode – there are ways around, ways to bypass. Compilation of miniscule axe-handled hacks to create an all-encompassing mask. Burgeoning grayscale cloaks that disarm immediate competitors. Encryption essential for the necessary ripping and wresting of the Indeterminate Space of the Hivemind. BRAIN notification: It’s about time someone carried out a deranged idea. Ha-ha-harrumph as he turns the corner directly into some wild-eyed pig-nosed fucker, his jacket raining fractals born from unanticipated impact of taut flesh on titanium dioxide dendrimers. The Hivemind churns out these solid, petulant nano-bodies in factories down in Seqnehai – part algorithmic metaphor, part physically real. Crude assemblage of quantum polymers and carbon graphene resulting in perfectly detached residents. Hosts comfortable in their apathy. Non-beings that debase the rest of the walking talking stuttering sleeping fucking mumbling consciousnesses that inhabit this post-human graveyard. Death here is the true high-tech trip.

Pig-nosed horse fucker is Exhibit A. Shards of a smashed LED amulet around his neck. Must have already had a run in with the skin. Got the jump first. Hivemind assembled would have sawn and sewn the subject, left mindless and barren in the end. An introduction to the digital dream of a fevered-out nano-bliss. Fractured lights reverberating around the piss-fit skull of a fallen hero. Rhetorical sockets plunged into darkness as the feed goes black. Flashback: sinewy ligaments, pale flesh, fragile ethmoids obliterated in a rush of binary shock. Taste of what they call blood as hyoid punctures tongue. Lords of the Indeterminate Space had that round won. Fast forward: desecrated amulet swine flared-nostril fuckjob stares a hole as hard as a fistful of indigo tendrils directly jacked from the feed. Rotors of memory whirring, Ambrose cool behind orbs of crystal chrome.

“Bodies have been burnt… Edges have blur-bled into the Hivemind… We need your amygdala to return.”

We’ve been watching you little one. Recording your sinewaves while internally hibernating in solid-state. Far from the last, far from the only. The Others gush with transliteral envy at the near perfect replication of your embodiment of Self. A by-product too hard to muster for the majority of boring abstractions that call this plasticine slurry home. A somnambulist’s nightmare of fragmented images and code the closest they can come to what your pure anaemic pleasure encapsulates. We understand your need for expressing lines of desire. Expressing it all over the blurred body of some His/Her’s face in a warm wash of consciousness melding. Qvesh sirens birdblasting all through your CNS as the system parses extrasensory media. The reality is the mean 170cm waste of space, the average 65kg hunk of polymetric flesh resemblance – those representative samples of heterogenous blinking inhabitants could not feel the same bliss if they tried. Even if the location of the Indeterminate Space was vitri to vi denied. If they signed in logged on connected downloaded transferred unzipped unpacked unlocked the cyberpositive place of your emotional treasures – they would still be left with the absence of dim creaminess, an abstract musty yearning to feel. An algorithmic body can only construct matter based on its own predictions, only acts on data it receives from the set subjected to its testing. You though emit differences. The key in your head acts as an emotional enabler, a remover of parts. This hash of zeroes and ones the difference between ecstasy and apathy. The unins000.dat file firmly ensconced is all but missing from the previous algorithmic set. A rare, mercurial file that plays the part of serotonin receptor snapping into the hungry space of His/Her wetware. A wedge of history that fits snugly into the gap where a kitten rubs its delicate body against a leg, that occupies the zone of emotions as a child smiles into your inexpressive face. Both you and we know this rachitic little body cannot be assembled nor, for certain, can it be automated. If only the Others could yield this experience in genomic simulation, well…

This riot would just be the start.

Cities of screens and flesh. Information imprinted with leaking fumes and aqueous liquid. The residue of reality unfolding like a slow-release chlorine bomb. Ambrose shivers. Something small crawls up his spine, like the sight of insect eggs in tight rows. Concentric circuits sprawl outward under a silvery and stateless sky. The distempered gapes of the inhabitants a little too familiar. The remains of these people move silently, listlessly in the face of a swirl – a dance of washed out light emitted from holographic monoliths define their faces. Majority of their skin has been reduced to cicadid husks – mere moving parts of data under the regime of the Hivemind’s luminary phantoms. Nano-bodies transmitted fluidly in the network as spiritual meta-data. Ambrose craves to extinguish these liquid crystalline exigencies that plague the Indeterminate Space in a cataclysm of fluorescent flames. To pummel them inarticulately with their portable Dada devices.

Hallucination as an argument against reality.

Dark ecstasies in caverns of pixels that accelerate through time. Memories from an endless feedback loop dredged from the flooded ruins of his mind.

Ambrose in a state of depression. Flows of unadulterated anaemic pleasure act as the only respite in this hardwired hole. Manifest thoughts become a source of expectancy for desire. Unreasonable demands of a virtual aureate create unbearable pressure on his frontal cortex. His spasmodic member burrows like a tapeworm. The detached parasite yearns to be released. Vibralux hum gently churns above. Contours of a stealth drone in semi-charged fog. Trailing matte gray beacon, familiar enough to be a friend. You are under surveillance. Everything archived in the omnipotent cloud. Elaborate system of plug-ins live streaming the Watched. Murderdoll always has an open window view. Though she does understand, base man-machinic urges mean she also must wait. Dreams of electric meat always win. Detour via a screaming pipeline of avatars. Every conceivable kind of esoteric technological delight. Formulation of an open mouth, shadowgraph of a violet-tinged eye. The smell of acrid flesh and burning polylactic acid purr along coarse air. Ambrose lets go and melts. Torso floating like Voodoo Gods in the K-hole. Avatars swarm the representation of his body. Closed lids like lemon rinds as androgynous forms flicker by. Pursed and licked skin abrasive like vestigial sandpaper as he is digitally exhumed.

Ambrose meanders along the coiled path. Shimmies across rows of detached actors torn out of curved light. The violated shell of a resin ball-jointed doll flares in in his vision like gnostic rhythm. There are thousands. Once working, now only a few remain intact, prone and unbroken. Charred debris of the shut down pave the way to the liminal space travellers desire. Welcome to the remains of the plastic pleasure dome. Time for Ambrose to do the acrylonitrile dance. Carves a sentence out of dense toxic air. Cleaves the grammar he needs out of the depiction of a strewn doll’s eye. Reaches the algorithmic border and stares back at its screaming abyss. Barely perceptible wavertone finds retina to swallow it whole. Voice recognition. Four letters for the Hivemind.

Intonamour correct. What some call a booth materialises. Buckets of taste for 300 kwai. Each step forward reverberates like a vibraphone in what’s left of artificial bones. Glitch temporarily severs the feed’s connection between subject and object. Tries to touch, tries to feel. Nubile forms float by in a magenta sea. The semi-permeable walls undulate based on the participants mood. QSP-27 bandwidth incorporated to modulate any schizoid behaviour. An effort to preserve the last beautiful objects that remain. Delicate plastic bodies representative of the vestiges of all hope lost.

Ambrose enters the dendrimer aperture. Mind melds with the smooth integer. All pure feeling uploaded as the external world hyper-atrophies. Genderless ecstasy awaits. Lattices shift headlong and superficial in the booth. Vertices drop away in minute rows of patterned off-white cubes, stream past Ambrose’s faces like a torrent of archaic sigils. Plastic bodies materialise more concretely. Time for mind to fuck mind. Ambrose participates in a diametric exchange of mono-disperse particles. An esoteric transference of data. A flow simply entitled the Maenads’ Crush. The thoughts and sensations gained from being present and here, in sync, course like Palaeozoic liquid through gnarled veins. Maenads’ Crush a requirement to sustain whatever is left here for Ambrose and the few Others like him that seek answers.

Fresh binary knowledge washes over him. She/He transfixed with a gaze. Cursor hovers like a blazing apparition. Each pixel rendered in painstaking detail. Forms undulate under the waning of flooded light. Image honed by a narrow beam of subliminal optics. His/Her outline a bursting coruscation of desultory lines. Memory of a faint intimation of a smile hovers over the doll’s mask. Ambrose tries to react, tries to reciprocate – all response drowned in the machinery of his face. Frustration. Give it another try. Echoes of His/Her modulated output: “It’s okay. Relax. You can be yourself here.” Like a cryptic cavalcade, the sensory feed permeates his closed lids (again). Strips of ‘flesh’ collide in neon confetti suicide. Closest thing anyone can experience to emotion crawls subterranean under his vinyl skin. Teeth sing in sockets (again). An altogether different tune than when it begins. Pleasure folds into inner consciousness with effortless ease. The weight of a thousand liquid suns press on all sides of his body. Securely encased in the polychromatic dendrimer tomb enabled by the advent of the cloud. Magnitudes of terror amplified in temporary bliss. Haze of microdots act as his red and white cells. A blaze of shuttering invasive white light ruptures his core. Ethereal fluid drapes over the booth’s polished edges. Translucent images dripping with quartzlite steadily ebb and then fade. Presupposed nubile forms evaporate like malware ghosts as congealed lattice cubes rush by.

Alone. Until next time he masters the patterns of life in the holographic universe. Body caged in a cube of white, he relaxes as the amniotic metaphysical sphere unbraces his arterial design.