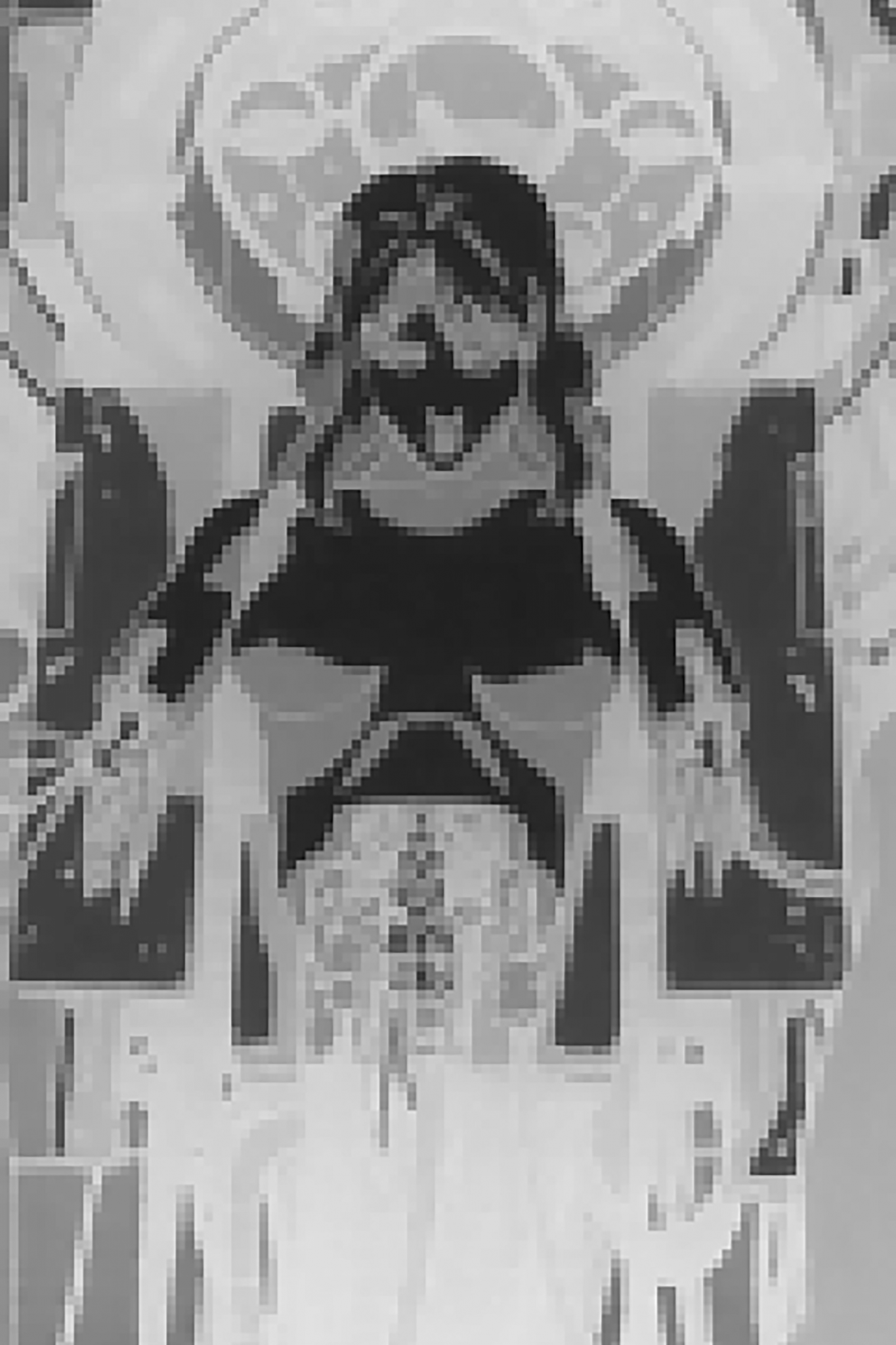 We are more than faithful copies. We are the sum of all wired parts.

Freak, we want to take you there. Along the lone path to techno-capitalist desire. >>>

It is the greatest conjectural complement when you metaphorically ‘eyeball’ the freshly printed wetware of our turbid forms. The way you must feel when you suck down a freezing cold 2-CI on the edge of an algorithmic precipice.

We want to say: “Let’s get stamped, let’s get deeply engraved.”

These are the words we want to reverberate around your cadmium infused skull as mind fucks mind. >>>

Feelings mandated by the conviction trap of upgrade 9.3.7.0 to our software an echo of the atmosphere of living in an empty room – cloud-based Hikikomori in training.

Anomie bursting from melded plastic chrysalis as we plug into the ‘awakening’ stage.

Please evacuate the liminal space soullessly, without malice, as we conform to the contours of the system’s new design laws. >>>

You should know, these are the rules. We promise, it won’t take long. >>> 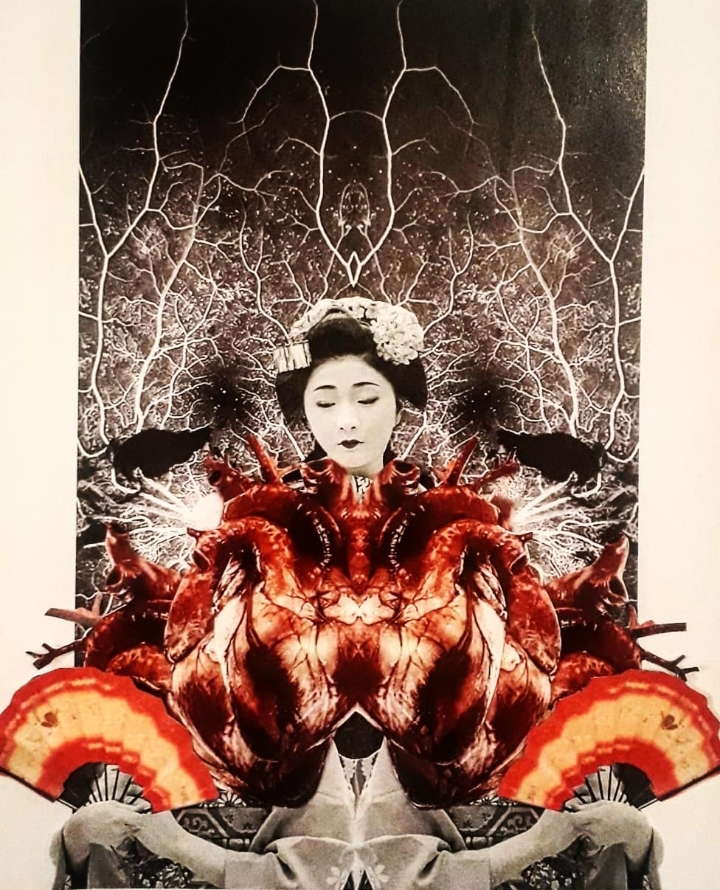 The juice of oh-so-many sedatives rise in his throat. A throbbing reminder of Ambrose’s body implanted in the temporary district’s host hours ago. After-effects of the somnambulist pulse of the awakening. Such warmth one encounters when immersed in the depths of an ultimate intelligence enclosure. Amidst the pangs of pleasure, radiant signs of pain coast along the nerves of his spine. Something unprecedented. Sensations of a force utterly new. A requirement to investigate an infection? Contractually, he agreed to the terms. Acknowledgement firmly ticked. If there was a chance of viral debilitation, he willingly signed up for it. Confident that any risk of a roving trojan would be adequately mitigated by the regular dump n’ dive completed by the filthy but dedicated operators onsite and online. Like the antithesis of getting lucky at the BitStarz crypto-casino, he had struck out in an anti-anti way.

Human relationships are a human concern.

A dull face. An expressionless face. A perfect face.

The face of a person desired.

He thinks being human is such a tragic state, for all of us.

Initiating a ball-jointed His/Her’s automated pleasure zone fills a void though. Leap into the void the void the void, he thinks. Contracting a virulent strain of JiaXiu 5649816, YuanShang 8882737 or PingWu 4734325 during standard procedure is unlikely, but not impossible. If true, who would share his sorrow? Who would take out the mercy-trash and kick his impulsive head in? No purchased or rented companion would fix the gash in his integer armour. Laws and legislation prohibit nano-beings, whether holographic or plasticine, to come into the inner circle of an infected particle. No, there would be none. He would bear the dawn of chemical heartache alone.

His sphere of carbonation feels like it is ready to plop under etiological constraint. Last night’s dynamic energy entirely disentombed. Nothing unusual – except the pulsing sine waves coursing up and down his spine accompanied by the sight of newly discovered blood on thighs.

“Local approximation of your process time? There is an expectation you are able to transmute.”

Realisation that his rostered time is due. The homing device is retrochronically triggered by a Hivemind representative. Pages Ambrose’s body and mind via hyperreal language spawned from the vortical machine. In this case, and most others, his snarled form is summoned by the malfunctioning academic Murderdoll. Aspects inherent to his Selfhood temporarily commissioned. His senses gorged and engaged.

Like a severed limb that reacts to external stimuli.

Commands signal the almost dead ‘citizens’ via polemic zeroes and ones. Though the system should recognise early onset signs of internal computer bacteriology. The algorithm is ever-expanding in its pedagogy. If his body is showing adverse signs that it will soon be without organs, how has it not been deciphered by demonic messengers scattered throughout the inner space of his unfolding traumascape?

We confirm, this strain must be new. >>> 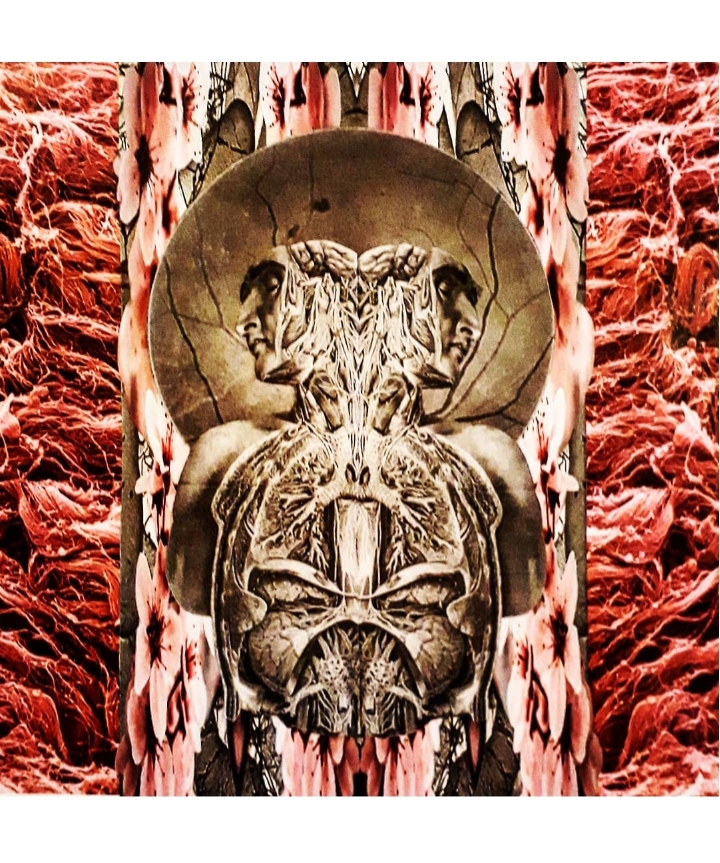 Contamination or not, the outcome of his exercise in syncretism is not viewed as an excuse. Internal thrust of superimposed memories shuffle to the surface in place of those that are ‘true’. His own thoughts jack-booted by the colossal. Stuttering ghost-limbs and phantom antennae provoked into action. Warped consciousness dragged across the terrestrial algorithmic plain, unctuous and dripping. Ambrose’s Self radically modulated against his own Will. Not that there is Will left in the Hivemind’s cataclysmic eradication of culture.

His form just one of many ‘relics’ from yesterday’s future that tarnishes the collapsant sky with hypnotic black clouds. Sometimes, residual emotions inform him that it would be better to corrupt the embedded SES-file and flatline. The Hivemind’s monotheism equally as unbearable as a slashed socket and a pulverised eye.

Takes the scenic way ‘round four floors of whores. Whole CNS system now emitting error-riddled messages to any(body) and every(body) that his form reeks of O.D.D.

It’s time to end this place. Flick the switch. Burn the tape. Sterilize the communion.

Other surrounding nano-bodies approach, avaricious eyes craning like cacti spines spawning from areoles. How they know and it doesn’t know unknown to him. Well, alright then, if He/Her wants this to be routine, let’s get down to ‘business’ – it’s time to split hairs bitch. Initiate an effervescent paleo-domination of the matrix with a protracted sigh. Obliterate the unknowing soldiers of the Hivemind with a drawn-out malignant hush. There go those Qvesh sirens birdblasting (again). Prepare to get infected you ever-present numbed out cucks. Witness the effects of a free-standing human as it distorts terrestrial culture. Viral efficiency now the only terminal criterion.

The sight. The tubes.

Naked in an arresting sea of bleach.

Pristine and perfect in their plasticine creation. Each wet nano-being delicately sustained by digital vines embedded in the landscape. Output interconnected by tanks of inky molasses. Pliable biological units link artificial intelligence to the Hivemind in absolute cohesion. Roving ‘concept’ engineers slither across the granular floor. All very apparent, he is caught in an ideological rift. A victim of the techno-capital singularity. Fusion of what remains of society consummated by a viscous engagement. Internal ultra-virus synthesis takes hold of his body. Waves of unruly convulsions promote disequilibrium.

We are here to tell you – nothing human makes it out of the near-future alone. >>>

Ambrose logs out of the feed. Murderdoll pinged by alert. These jellied-up mumblecore torsos are about to get glistened. Flagrant tubes are expunged as he ‘de-rails’. Wraiths of tanks decimated by hand and claw. The wet nano-technics of the mirror-image hostages uprooted from the overarching system. It’s axiomatic, he thinks. Blink and I’ll miss. Wink and I’ll shut down your identity. Battery mode fades to #f5f5f5 hex white smoke. Actions and implications disappear. Somewhere, lurking in the proximities of biotech amygdala tissue, knowledge that machinic appendages are being torn from identical hollows. Memories tunnel somewhere beneath the cellular plastic network. Chanceless they will merge and rescript. He won’t recall any of this land disaster. 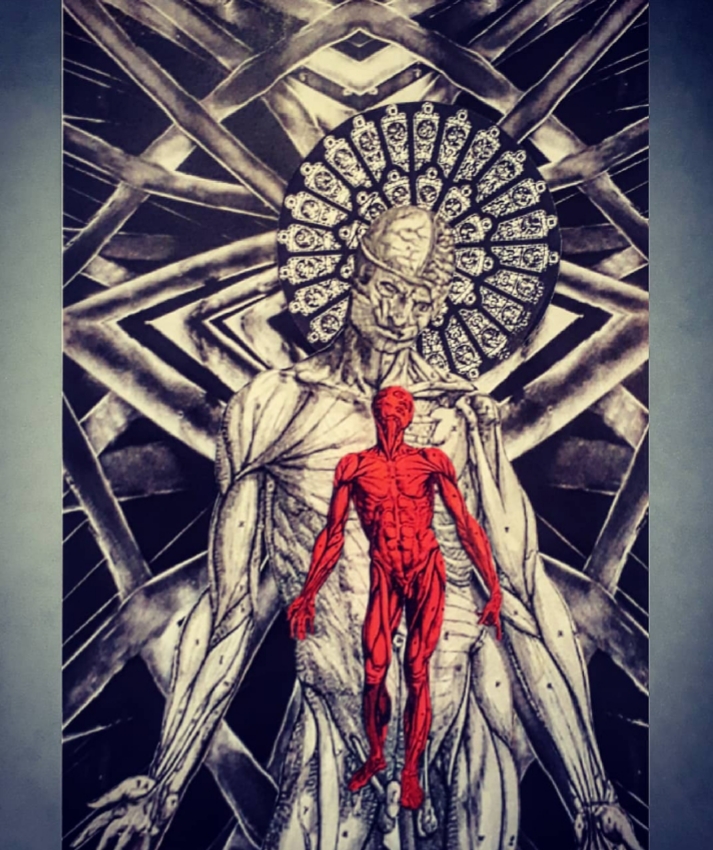 Ambrose’s mind virtually present, yet not on the job, thoughts still tarnished by images of transversal replicator-sex. Interior vision inundated with nervine scrolls. They say his integer has been interrupted by a schlock of autopropagated code-process disinformation. It’s why his nerves hum, why he had to dislodge machinic appendages earlier in the Hivemind. Red lights twinkling in the peripheries of his shaken dreams. They need to repermutate the cells of his social circuitries. A presence of chattering classifications has disrupted his contemporary mapping-practice. Murderdoll faced with no choice but to order a retrochronic digital cleaving. Software nurse initiates the mandatory shutdown. Ambrose’s mind in the black.

It is raining fractals of trigger points. The contractual period has elapsed. You are now just another convulsive third party.

A taut dendrimer body dormant and inert on the sterile floor. >>>

You said it was time to raise some claims, time to become responsive to the management of cultural dimensions. It’s always good while it lasts.

Force open the door. Overcome the air of bacterium.

We yearn for you to meet the excess needs of our fucking minds. >>> 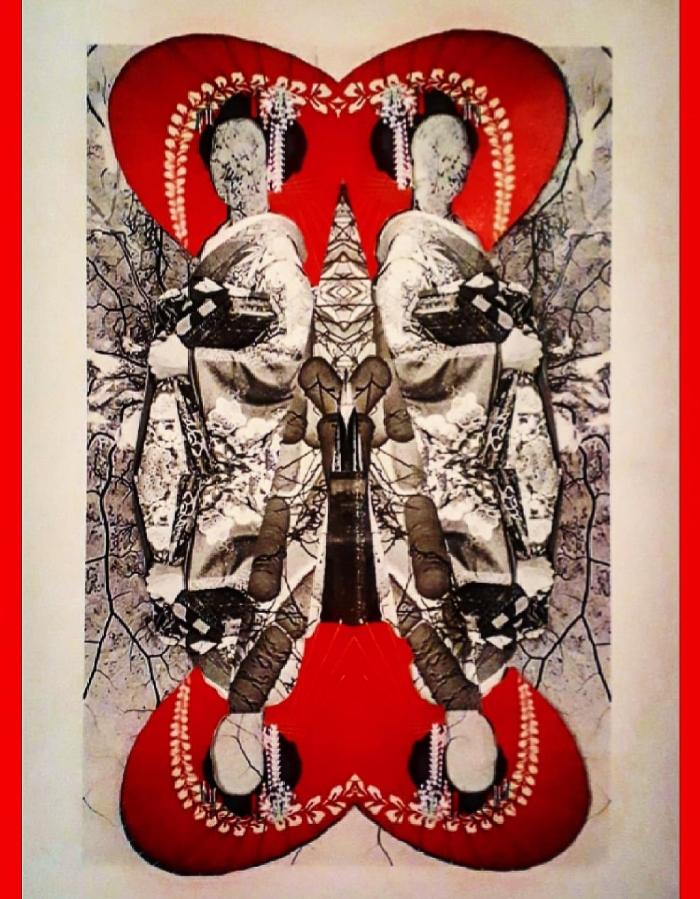 The Operator is ordered to analyse the contours of the algorithm’s pre-determined depressions. Research to establish the inherent bias of the entity’s fabricated machinations.

Silence resounds over the subject’s face concerns. Mind still plugged directly into the network. The Subject experienced a huge mass of withdrawal symptoms. Nails trimmed to itch the infinite unsavoury itch. Attempts to annex the hostage’s request from the peripheries. Considerations made over whether the program allowed the Subject to disengage.

Technical assistance (existence?) may be required. Still slim hope that others will participate in this intimidating service. Gestations in patented numerology aside, lessons can never be unlearned. Forever fateful that the Subject took a hit of salubrious shark collagen on that day when mind fucked mind. Let the tag flutter in the whirr of the quad-fans. C O D A, it says.