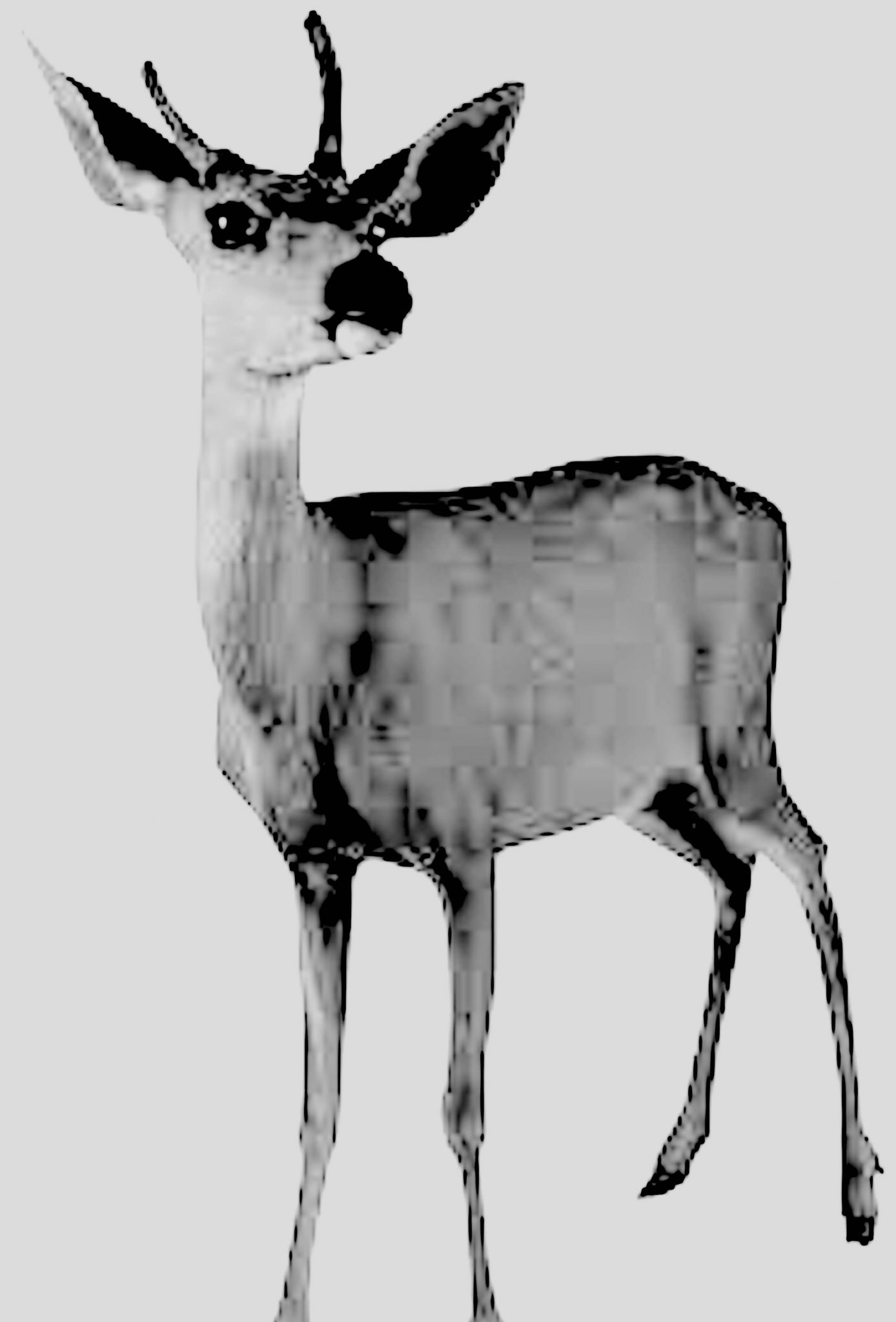 Open green space shrouded in a fine layer of mist.

Flashes of colour blur-bleed into a post-modern anachronism.

Maroon and emerald lights anneal themselves into a likeness.

The new prism is raped by refracted lights.

Deer watch from an obscured stone lantern doorway. The lanterns are encrusted in moss, the stone surface embalmed and preserved somewhere inside.

Muffled sound from the entrance.

Faces of animals stuck in an endless feedback loop. A distinct mixture of grainy greys. Like footage from a shopping mall security camera.

One deer bends down to eat, [H]aptic glitch as it chews and attempts to swallow. It can never eat.

The footage won’t allow it. It is a prisoner of the scene.

Another deer stands nearby, it looks on pensively as its companion struggles to digest any of the vegetation plucked from the plentiful surface of this earth. Its gaze only severed by the static and [H]aptic glitch that plagues this isolated moment.

An eroded line of thought / A clear temporal demarcation.

This is the non-linear stare that will puncture the eternal Void’s existence.

Its deliberate and inevitable initiation.

The messengers of the Gods here are expressed in raw and untranslated form. To be deciphered by those who are hurled into their realm.

Pulsing tactile hallucinations shake the snow globe that is inhabited by the prone quivering creatures.

To leave is to merely enter through another simulated doorway.

The air that surrounds it thick, choked with the heaviness of dark mirrors mired in reflections of a stagnant constellation.

Glitching deer slowly become indistinct as the image engulfs them, dwarves them, obliterates them – until they fade into a mere imprint of the rendered scene they made up before. Flickering like an old television turned off suddenly, the final image branded into the screen in blinding white before it disappears just as quickly as it appeared.

The scene has no sound no ambient noise no chants no drumming no sutras – only silence.

Each as sharp as a roughly cut nail. Piercing the ever-present image of the primordial entryway to the domain of the deer-gods.

Fixation manifesting a luminous third eye. An eye forever trained on the stone lantern columns that rise high in the sky.

A room full of

Each one an exact replica of the last.

A four-legged beast with antlers

The water as shallow as your labored breathing as you watch.

Something sticky on the lanterns as you brush them while stumbling past.

We are no longer alone in our quest to quench our undeniable thirst.

A requirement to exist.

The dull colour of the lanterns further blunted by the cascading shadows that envelop them. Thin slithers of moonlight segment them into fractured parts of a whole.

A ruptured obelisk stands nearby. Awaiting re-erection that will never arrive. Deer messengers of the Gods unwilling to yield to such requests. [H]aptic glitch reverberates around the chamber thus signalling the Void’s imminent arrival.

Set of stairs to an overhanging pavilion emerge in the damp light, desiccated ferns and vines erupt from stone fissures. Lattices of emerald pigments streak the ceiling of the dark vault, undulating from the reflection of an ornamental pond.

Panorama of charred debris stray the ground of a decimated chamber.

A medium vulnerable to the passage of time.

Structures abutted by trellises that have no common form.

Rustling murmur. Pressed deeper into the labyrinth. Forge through decrepit hydrangeas – a feeling of being here before.

A feeling nothing short of despair.

Short bursts of curdled animal breath puncture the air. Larger creatures than walking speaking stuttering fish enclosed in the subterranean vault. A flicker of fear that the unknown, but deeply known, provokes.

Visions of a lusterless golden gong.

Pronounced failure to gather and retract light. Light not repelled nor consumed. Permanent disruption of the principles of radiant energy.

The messengers call this the deathly March. Guided by the drumbeat of the Void’s pulse. The Void’s heart.

Message from the underworld shared and sent with the occupied as vibraphone meet bones.

Gentle lapping of water as nocturnal music for solitary vigils.

Palm lines used for direction in lieu of a sign.

Pursuit of a dream in a literal mountain of consciousness.

This is the universe at human scale. At war with the laws that govern this place. This zone. This abyss. The Void shakes violently with every attempt to proceed further down the corridor. Sopping green appendages leak phosphorus minerals into the night sky. Bolts of radiant light cascade from hardened arteries. Poison vapors deny the coarse air purity. Messengers of the Gods loathe to allow access to the divine.

Gravity defied / Gravity not the same.

Lack of ability to place nor comprehend the message, but these abstract shapes spark a definite presence felt within.

Shapes in roe, shadows on lanterns.

of a post-apocalyptic rave party.

Lessons in finding, lessons in love. Torrents of coruscation gushing below above around adjacent parallel.

The symbols light a path.

Sparkling virtuosity a forceful guide to the predetermined destination.

Beyond the Concealment, a pregnant mound juts from the wall. The Ambassador awaits like a hibernating cicada.

Something shifts in time. Holographic reflections portray a split planet. Ambassador released from Concealment. Like wolves mediating a trophic cascade. This Apex predator is about to indirectly alter the landscape.

Mouth opens wide. Sac of eggs inside the maw. A tiny version of the Ambassador residing in each shiny orb.

Some yawn / some just roar.

One has three eyes and sucks on the remains of errant fish bones.

Transparent orbs expelled in a hushed sigh. Swarm of spheres projected into the Void’s atmosphere like glistening pearls.

Crawl across the surface. Been crawling across it for awhile.

Explanations of the myth. Articulate murmurations. Language outlines why you are here. Resemblance of words, of sentences drift in and out of focus. Jagged and deformed punctuation ruptures the air.

Dustpit residue reprise. Particles of the husk mutate fragmented sentences. Verse taunted by opacity. Clearly a message, without the ability to be understood.

Ruminant hooded mammals take you in.

Syllables tenuously affixed to the subfloor.

Words grasped from the nexus keep parasites at bay within.

Billions of years of transformation swallow the most itinerant observers.

Unwitting participants satisfy the death-drive of the divine.

Infuse the air with blackstrap molasses.

Visions of a ripe split moon blunted by the luster of a revenant sky.

Vapor soaked wanderers corrupted by the ebbs of deep time.