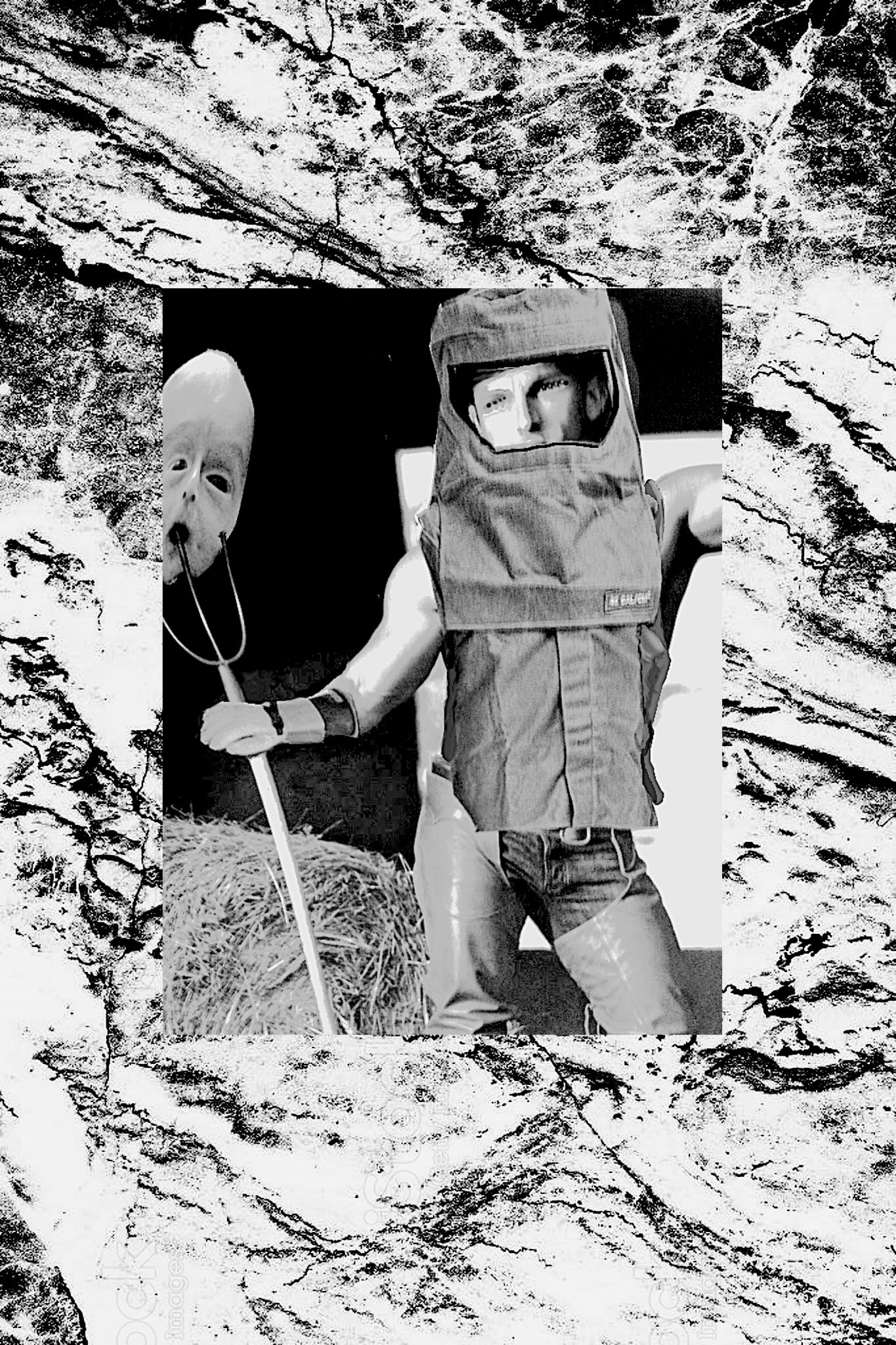 He’ll never live down the reality of himself. He’ll never live up to the folklore. Nothing to see here. No deformities in sight, only pressed flesh and tight corners. As long as top-tier firms are backing him, you’ll be snowed under. The glitz of his blitz. He isn’t real anymore–– if he was, ever. The influencers know what you want. You don’t want real: only real stupid. He can do that with help. His finest role yet is a viral load of underwear catalogs, proffering cum-streaked screens and auto pop-out order forms.

Dog’s brain and infant heart. He’s been running the gauntlet on salinebulged, hirsute legs. Squeezed through spinnerets. Rewoven and reworked into an electroplated gelding, a castrated mannequin, a waxed, dancing, fellating eunuch–– watch him go–– with just enough gentle machismo to moisten the flaps of those naive enough to swallow the lure of his factory-farmed lore. He keeps his jig in a tesseract. Privately, however, when he threads it through the continuum–– when he thinks no one’s looking–– his public nuisance swells to proportions which might qualify any common person for indictment. He’s immune from such civilized processes as the barking, snapping jaws of robust legal counsel will surround and swallow him in the aftershock of yet another enzymatic blowout. The Law will spit the skrilla that’s been smashed into their gobs. He may be forgiven. Because, after this career phony, this private ruiner, empties his blood vessel into our psyches… a trick he’s well-paid for… our tongues will weep the seminal fluids from genetic memories imprinted by 80 years of daytime drama. Eventually, when he cannot maintain the demanding facades- the leaning and bending, his artificial flavoring and coloring will fade. The soggy sausages provided by his meal tickets will come and go in an entropic galaxy of subatomic luxury, as long as his green’s still gold; he’s shedding pixels with each screen shot, with each tedious meme, saturating this heaving market. That’s his vapor trail you see streaking across the screen, smashing into another celestial body causing a ‘small bang’ of softcore gore. He commands the screen for a moment. His ebb is all flow. For now. But, the box office will mediate. The screen will decide. You know… that thing that’s replaced a sky… delivering the only light that matters, blue and drilling down through your corneas… committing your comas to an ever diminishing false memory.

The camera gave birth to his abs, those guns, which penetrate your eyes to slow screw your wish fulfillments into lividity then into the ground in a slow, greasy spiral. Branded, pawned into existence through a booby hatched goody chute, this stud was born to strip and squat, to tart it up, never to fall short whilst creating the legend of his ever-falling shorts. He’ll put it on us and ride our timelines til we scream whatever makes sense at the time. He can be the object of our admiration or cruelty, depending on how well he fingers our sublimations. Yes, the crowd still erupts into fever whenever his lips part revealing rows of perfect shark teeth, but, there’s no more autonomy in him, in us, in the machinery of today–– and that’s why. All has been scripted, behind and in front of the scenes. His mission, as defined by an oversight committee of loud smelling perverts, is to grab the collective throat, lay it bare and plunge in his pricked tines, opening the venous spigot, full blast. He’ll do this over and over figuratively and literally until he has a star on the walk of fame or he disintegrates from the hunger that drives him. Whichever comes first.

Plenty of takers!
Any bets?

On top one minute and bottom-feeding the next. Smoldering in the brush. When the audience tires, they’ll burn an effigy and flush the ashes back into a cistern where they’ll collect for reassembly into another idol for, more or less, immediate and aggressive consumption. A corporatized sybarite whose sole purpose as a shill for soap is preordained.

It’s all in the job description of celebrity whore. To be a contender, the professionals agree that he needs re-calibration–– more than synthetic hair, eyelashes, hormones… Spanx… the ultimate attitude adjustment of overzealous defenestration. But any heterotaxic intervention won’t make a dent in his shadow-self, phantom-shit-show: by the time his intracellular burlesque reaches the coast, stripped of its congealed plaque buildup–– someone will find it funny, fit it with formats and shave off the edges. Should you throw back the hatch on this dreamboat, it’ll only reveal more complex hatches made of tissue and bone protecting the rare hanging beef, tender to the touch, dripping au jus. Cross these thresholds at your own peril.

You’ll find plans for the future, the only one still available, under his diaphragmatic subflooring. Otherwise, he’s an empty construct awaiting that influx of opiated inspiration to pull in the script, inflate it with death gas and squeeze out an exhalation of terror and thuggish delight.

What happens when the thresholds of safe entertainment are breached? When the actors pander obscenity, which is only imitating the imitation of life? What happens when the first bird’s feet have been stamped around the retreating eyes? When the topography has turned brownish, creased and frownish, mountain range to landfill, we all fall downish?

Into the fold! You bought the same story he did allowing his quasi-alphic identifying markers to rush and clothesline you. He’s the sleeping beauty, the giver of great figurehead, fixed within the uppermost point of the tower of power. He’s battered from hot winds and abrasive grit; his surgeon has concealed the scuffs with yards of fresh fetal skin from that test-tube son of a man-bun we’ve all heard about. Ad nauseum. The road he took, as they all tell you, is open to you, too. Sure. It looks like a one way. It looks like the yellow brick road. But, look again: it’s a two lane hazardous materials route where yielding is only optional. He could show you more- if you dug out his core. If he could speak plainly, which he can’t, he’d say that the realty of reality is a roundabout with no signage and shrapnel flying in every face. But, that’s not what you desire of him: that’s what you secretly desire FOR him. It’s all on the D.L. He’d be assassinated if he pulled open those hatches in front of the news corps.

His rebooted image, more fiction than the contents of any library, helps you forget this–– helps you masturbate, helps you fake it better in the day to day grinder. You’ve learned a few things, not from any staid and stuffed academician, but from his stories, fables ripped off the ancients and rubbed the right ways, over headlines and memes, to all those insidious happy endings erupting from the tip of the combined wishlists of every asshole you ever knew that wished they were him wishing he was dead because there’s a registry for every major life event and he, like you, must follow the instructions and cough up enough phlegm for everyone and when that’s not enough he’ll be leaned on for a lung. It’s what he was told to tell you under advisement of a derelict committee of similarly fudged and smudged stars bent and screwed on PSA. He had to do it but at top speed. It’s gush and swallow, you see. Thankfully, his image is enough to help you recover. Take him in. Snort his party lines. Trace his VPL. Show him love. He’s given you his best… now it’s time for you to give him your best, i.e., the contents of your wallet. He’ll spend it on destroying himself… all for you.

Boiling the bottom in line seems de riguer, so there we are. Unless that’s you, REJOICE! Your mouth to his asshole–– the only way to resuscitate our limping economy the economies of legions. His image employs countless thousands of people. His hidden destructions, when captured for your amusement under guise of make believe or leaking gossip, will help you forget the saddle of your battles, will lull you into a giddy electrostupor of spend-down if you fully let go. Quite frankly, Nasdaq hopes you do. You might never suspect he’s only backdraft filtered transversely into a distilled form like baby food for your organs, take your pick. A form clean and recognizable as nothing you know but everything you want.

He catches your breath, your eye. His idea, the image of him, is a myopic world itself; it’s safer when the options are limited and the palette is only primary colors. Don’t you think? His projections, propped up by bandwagons and bunting, sealed in skin and polished to a sheen is there for you to project your hopes and ropes over. To dissect, over and over, using the streaming service of your choice.