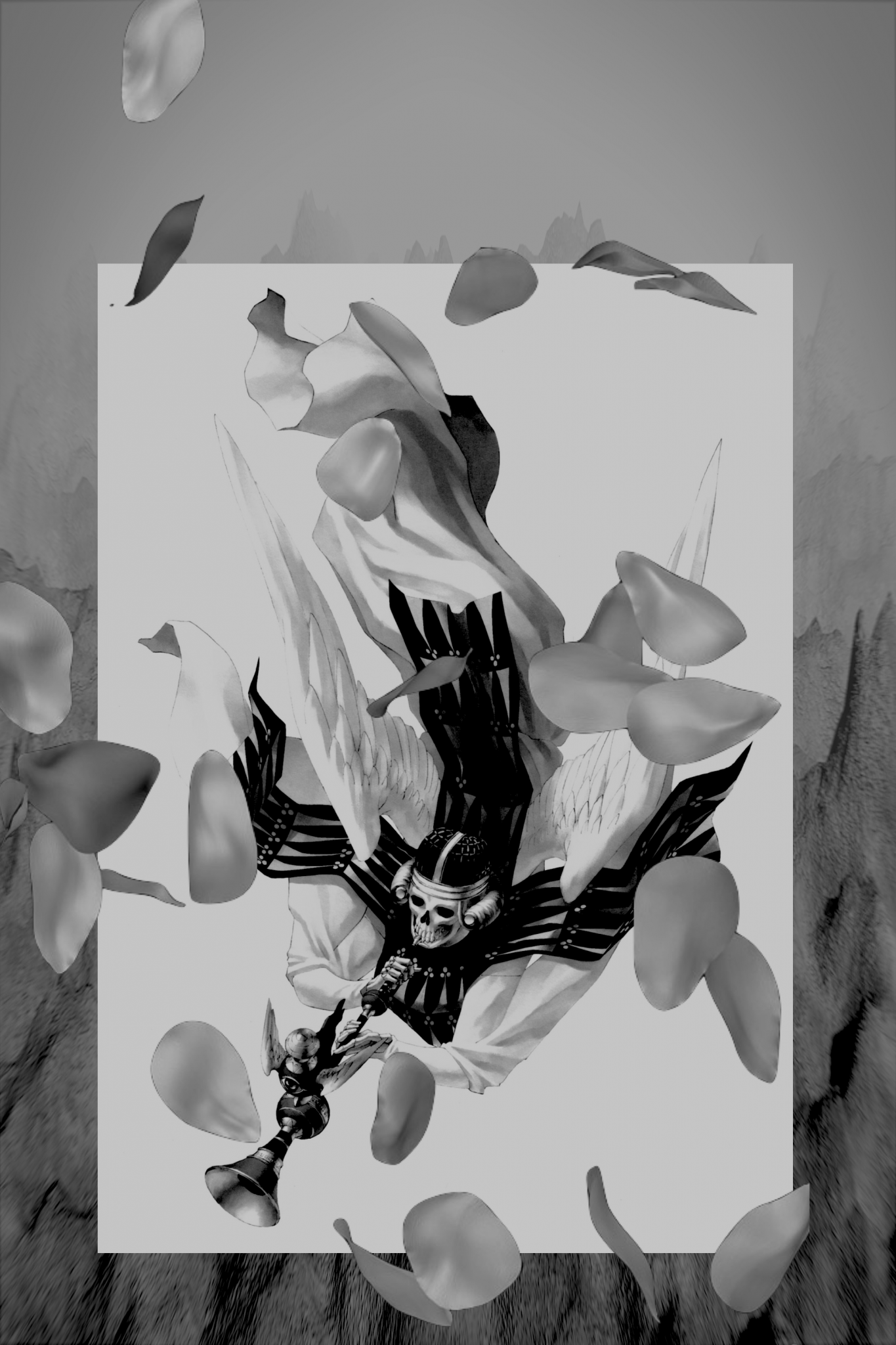 We make excellent ghosts you and I, pretas dressed in mortal claptrap. We fed only on carrier bags and webs of orb-weavers behind the refrigerator. Our stomachs became round and filled with white slurry. We swam through canals flushed with microwaves like foil streams, to be among spoiled, fat bhoots. If one devours the food of a master, might one move through his flesh? Let us choke on each barbarous, spiked pineapple, smother ourselves with fried medullas, served and fed into by Bob and Tom, our waiters for the evening, Xeroxed into verbose gradient. Gluttony requires a patience neither of us admitted for our brains are sharp and quick. We have seen advertisements (end of life respirators, mosquito repellent) freckle across your birdlike face. Avian-reptilian bastard wipes drab sand against each equatorial cheekbone from west to east, an afternoon erased inside an AC simoom, my acupunctured imago.

Your favourite word is jest, a sneeze of a word: jest. You call our lovemaking that word. Jane Foole bananas! and melting into a bed of pointillist gloom and haloed in the lamplight trickling through a rain-soaked cellar; the outside glow of a nowhere planet, magazines covered in bald politicians screaming treachery. I want to take you away from this damaged sprawl, a city where aerosols are ushered sheep-like into cans by Zhengzhou striplings, cancerous papillae already forming inside your armpits, your hirsute crack. Let me eat the cancers that have waited so many nights, the casino in your lungs.

We watched a documentary on the Great Pacific garbage patch, an entire peninsula of plastic bobbing out in the ocean, a Sesame Street utopia miles away from humanity… all that space, alone and… dreaming. I love to watch the molten television wrap around your scrawny face sinking inside hyper, evil bodies of pop stars, our own ozone bred in the apartment, silicone mainlined into forehead of extra-terrestrial Samaritan, your little half-moons of sweat under each arm. It’s called a trash vortex, I recall, as you reach for a packet of cigarettes illustrated with holographic children dancing in a magic-eye alcazar before their tumour princeling, his natterjack head. Sponsored death pact with a pink wyvern.

It’s strange what people need from each other, the sudden consensus of an act: execution of a bleached blonde king, eating their tribal padre on a hit reality show. Latinx influencer reblogged covered in wobbegongs, Madonna lyrics tattooed across their chest: I know where beauty lives. I’ve seen it once. If entities resemble each other, do thoughts combine? Are Bob and Tom conglomerated? I glance down at vegetables ritualised on a plate by symmetrical doubt, cucumbers flayed to expose their white scalps, seeds worrying in transparent suspension, capsized in new and fatty ester.

You nod absently, infect me with cancelled breath, an emulous stink that clings to every jacket I enter, the throwaway toupee you made me glue to my skull. You licked the sores with vodka, a Friday bloodletting (raw milk for Shiva, butter for Vishnu), your ponytail tangled with sickle cells, a ring-necked cobra iconised by Instagram cult. You chopped up newspaper obituaries for a princess reduced to a Ballard myth, the Yorkshire necromancer incarcerated behind Adidas stripes, serial killers that made an allotment boo-boo. You willed yourself inside a stupefied witch neither boy nor girl, cheap clad sterling and bobbing eyeballs of Murano glass. That pale gardener in a Neapolitan palazzo said you’d seen a horse move through the wall, my poor bambola shook and shook in my arms.

I know all these things about you, I understand the situation entirely (I was gifted with a form of telepathy since I defeated the superego—a lighthouse in a four-year-old dream). If you could only tear off your skin like that terrible werewolf fiction you entertain, paperback Mormon dysentery. Aleppo pines pulped for masturbating Utahns, a strawberry tree torn out the ground. For three nights, we watched Syria flattened into a beach on fire. Spells fainting in the arms of Moses into our internet browsers and detonated in backspace kablooey, an inevitable erasure of nations, a boogieman with a suitcase and pornography of the insignificant. You told me a secret about your mother, about her favourite poisons under the sink. Let us toast to superfluous water! tears that continue to flow from the thirsty! the infinity of their sadness! The internet was our first graveyard, pixelated Super NES sepsis-babies congealed in olden clickbait.

More plates arrive from obtuse angles, lamb bones crossed and knitted with cress and garlic. A slimehead exterminated, led before us on a bed of snow like a Narnian child.

I glance through a squenched galley where sweat leaks from penniless Bulgarians like aproned bibcocks bargained from a recruitment factory, a manager called Vinnie that thinks about the Thai cleaners, what he calls ambiguity. Another door reveals urinals brimming with piss, terror leaving the bodies of men. Superstar ITV2 fascists wave their cocks at bare porcelain, a Gambian attendant staring uncomfortably into bottled machismo, Hun armpit stench. A hand dryer blows germs across the bathroom like Morricone showdown, ketamine rolling off a toilet seat into watery fugue states, footballers unable to feel their face. Phobos and Deimos, the round, open mouths of Bob and Tom align into yawning syzygy. I remember seeing my first eclipse like a cheap IMAX spectacle, and a child pumped full of nitrous oxide, its mad, giddy head expanding like a red balloon. They showed us Hollywood x-rays at university, Gwen Stefani welded in fluorescent train tracks, and images of Homo rhodesiensis, the yap of a monster.

“The sea must be a miserable place,” you mumble, staring at the ceiling fan from beneath the itching nylon wig, at conversations gulped upward into an oil spill of stars.

When we first met in the Amsterdam hostel, I accidently rumbled your hunched skeleton, a blouse covered in ecru stains. At the cinema, we knew the murderer an hour before the fink was found correct in his schizoid guess. A grandfather clock with enormous transvestite lashes, marijuana stink baked on the engine of a Kawasaki. We were warned by the landlady about her hated Anika… not to speak loudly, a Dutch superstition about cats. We kissed on a train before goosey sightseers, their red, rheumy eyes blinked into singular extinction. Maybe planets agree to die, laughing in a medieval noose, ice-cold and obese. Postcards all that year eaten into a lipstick coffer, your biroed address. I loved to read those letters, watch the vibrations sent through the webcam like psychic surgery, sinusoid and making you cum again and again, bored and screaming in your makeup like a Vegas clown, a Showgirls jack-in-the-box.

Numbers grate on my wrist into thinner brothers, each spindle long and arthritic, perverted Roald Dahlesque scribble. All our years reduced to pockmarked rubble, an Athens stench, radiation creeping through the Emerald City of Oz. We sit on a raised dais before the other diners like iron-poor villains, a pantomime Abanazar and his conjured bride. I can tell you want to run from the restaurant and these sad, haunted Bulgarians, their cold buckets of eel blood. A séance is conducted on a nearby table amongst piteous lobsters. We are entering another world, you and I. Hurricanes in a sense miraculous, an invitation into a lion’s mouth, his scared soul. We were summoned tonight by miso soup, liquid foaming and foul and submitting to its own stock. Could I control you with an optic blast like something from a Brian De Palma nightmare? watch you rise from the chair into the air into green smoke?

Your favorite film is Cannibal Holocaust. The actors rip apart a giant sea turtle and it’s appalling to see cruelty that possible, freedom as a hallucination in pseudo Manhattans. Journalists gather to watch a pig explode as we puncture the hillside of a soufflé and disembowel its black gak, gobble clementines fainted into cream. Do we terminate our animal selves with straightforward application forms, marketing campaigns that abbreviate our pasts into painless fodder? When Link arrives in Termina, the Happy Mask Salesman asks: You’ve met with a terrible fate, haven’t you? You have shown me videos on your phone of human beings stolen from scenic villages, happy to be removed from the lives of their bourgeois parents, the cupboards and cupboards of things-to-come, which when tied and forgotten in jute rope, they themselves begin to resemble; Warholian somebodies, simple canned goods.

Grease crawls tarantula-like across a paper napkin as you spit into a hand mirror at your walleyed sister. Steady in a Foucauldian turtleneck, you apply more sand onto stubble, the evening, Victorian self you read about in an Edinburgh travel guide. Others can smell the sour funk of your mouth, lengthened on a taxpayer’s grudge, as we discuss your useless father (unemployed actor, addicted to dwarfism) and his wife’s vapid suicide note (sleeping pillows go beneath the sham, beneath the throw cushions. A flat sheet and then duvet on top, finally blanket cover). She believed in lycanthropy too, took you to a spittal built in the 1500s to defend against wolf attacks, her fear formed through the daily act of living, motherhood sudden and lassoed around her lollipop head. She spoke of men and women huddled for an entire hour in a Bergman cabin, holding their breath just before the bazooka light appears.

I see your fear of sleeping alpha (Fig A. strontium-90 found in baby teeth) as you grope for a zemi, silver juju of any kind in your purse (Fig B. coins and jewelry melded to the femur), comatose eyes switched on, brighter now like boiled candies. You stand to leave as steam rises from oysters like spoors of bluish laughter, an eerie chat show applause. I am dice that tumbles through us 6… 2… 1, a Campari godhead (777). I know everything about you: a recent fascination with an Arkansas sociopath and his insured cock, an escape route dug beneath your fresh perineum. We are brought closer by our secret-making, fingers crunched through lettuce forgiven, which point only toward new ways of becoming in a well-ordered society: an Ottoman diet of rest and slop, the crocodile monarch on everyone’s lips, inspiring audience participation, adults overwhelmed in perfect limbo.

“I need a cigarette.”

Picnicking in a menagerie among parakeets that scream only for you, our plates splatter with their white and turquoise droppings. You bind your feet and strangers pay the gas bill, our weekly hajj to Sainsbury’s. Running scared down a corridor became an entire franchise, one more Scream 2. I cannot wait to see you later in the television screen, a corpse in a baseball cap. Our cupboards of latex, soon heads, dusted and slathered in Catherine Zeta-Jones cream. We leave in eBay disguises, coat pockets filled with packets of glue, morphine. I follow you into traffic, orange, widening onto walkways, paramedics born again as anti-messiahs. We are entering another world, electromagnetic… one of bland crystal and duck eggs poached beneath the heat of pylons. The remote control, our blinking compass into VHS annihilation, an abundance of stomachs fed inside the gnashing machine. Smoke passes through you like an abandoned house, a gaki you call an idea or delusion depending on our monthly poverty, a horizon ashamed. I run into the street and scoop you up like a breathless gewgaw, feed you zucchini blossoms—yellow and fried. I save you from yourself.