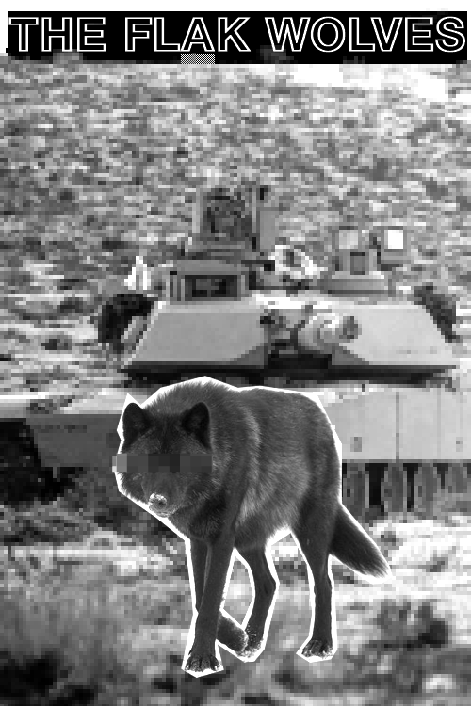 wolves in body armor howling at nothing. hungry hungry hungry HUNGRY. eating and killing and shitting for ***********. siege upon their own ramparts. HUNGRY….. being filled with sizzling holes in a godless landscape of hollow figures dotting the hills. a manic pack commander, clung to by a glittery coat of maroon and a diesel-powered automachine for her right leg, is feasting on her own offspring. she is codenamed KARE. in their war, even the puppies are soldiers. Kare reflects: the enemy uses weapons of all ages. trained from birth for death. all is opponent.

her entire unit wears dog tags, stamped in blood, with a single designation: FACTION. flat trophies of silver, displaying meaningless names devised for the smooth operation of endless combat. her tags flaunt the name of her highly-trained spec-ops barbarian tribe, FLAK WOLVES. a platoon of beasts that only live for a full kill feed!

the Flak Wolves are a squad of doomed canines. nameless and absent meaning in their fangs, only the pack commanders are given names beyond expressions of disgust. the wolves have no kill count. each head they tear is forgotten. only clung to their memories by scents. killing and being killed. they’re life inverted. only born on their own death. they’ll keep hating and hating and hating and hating until the world is empty. an exchange managed by blind/deaf wolves spews out pointless rewards none of them murder for. the money is deposited directly into accounts many of the furred mercs forgot the details to years ago, banks some of them bombed the fuck out of long prior. they were fighting for the thrill of the KILL, now.

while the blade between her jaw is sinking into collarbones, she finds herself projecting into memories of a past that might have never happened. hallucinatory shades. lavender under her lips. lovers from the wastelands, scarred and tired. whoring for more meat, raw and bloody. she fucks in her head and fucks her head. dopamine overflows her brain. pleasurepleasurepleasure as bones separate. she was whole, once. before the acid rain. now her brain only stops burning when seeing her reflection in puddles of combatant blood. fragmented against a stray flechette lodged in her temple. ONLY MASSACRE REMAINS.

a pelvis cracks between her front teeth. she’s supine against a slate floor, the inside of her bunker. eating her young and those of her squad never felt good. it never horrified her. it was necessary. they never stopped spilling organs and they never stopped fucking. fuck anything that moves, dead or alive! carnal addictions ravaged the group as much as lust for death. it was the pack commander’s job to clean up the leftovers. can’t raise new blood towards a canceled future. small livers slithered over her tongue. CRUNCH. the floor is wiped clean of carcass. only a spattering of viscera left. she laps it up.

Kare surveys over fields of her beasts performing training exercises against a red-tinted sky. the sun is starting to lose itself earlier and earlier. the snow will be here soon, she thinks. UFOs blinking emerald signals are haunting the horizon. Kare realizes, we’ve got hostiles. we’ve always got hostiles. fuck! a .50 BMG round shot from the trees turns the upper half of one of her valuable hacker vv()lv35 into worthless & gory lawn decoration. a ribcage hangs taut out his cavity.

she barks orders to the scattering canines. enemies at the treeline are making their way through the ranks like blood from open wounds. a rival faction has come to collect. the debts they all owe each other, in [dead] body weight. knife fights in the sun’s red grace. Kare could see her support gunner, her trusted #2 that always held impenetrable walls of suppressive fire with his back-mounted chainguns, surrender to the combatants. they gave him so many new holes he could barely feel how empty his body suddenly became. a war crime. A MEANINGLESS DISTINCTION FROM ALL OTHERS.

her troops have scattered too much. the radio chatter is just laughing ghosts. Kare runs back into her bunker, holy place of arms. on the westward wall hangs the tank-like apparatus her support gunner used. THE SUN IS SETTING. the barrels spin a little as she slides the behemoth onto her back. comforting, the feeling of cool metal of a war machine on her fur. memories of home. metal sheering against metal. this is her church, her place of worship. a landscape where every day is the Sabbath. make sure the ammo boxes [filled w/ 7.62x39mm w/ tracers every fifth round] are slotted into place. the machine is operated by a grill connected via wire that she bites onto for particular commands. left bite to reload. jaw splayed open in cries to fire. her revelry is shattered by two of the enemy wolves sneaking into the entrance of her bunker. they don’t even get to see the bullets that reduce them to paintings on the wall. only heard the whine of six spinning barrels.

Kare coats the left side of her head in their blood on the wall. the inevitability of it all. she will enjoy herself, dammit! her unit is falling apart, their dog tags littering the ground. her sniper team is at her feet, all their legs torn off like paper at the knee by shrapnel, lifeless muzzles pressed against each other. the Flak Wolves are finally receiving sentence. death for the ghouls. the sky is turning royal. she, and the rest of the company, won’t last until nightfall. few minutes at best.

she’s the pack commander, 437 high-caliber rifle rounds on her back, she will dance! whore herself for the raw and bloody once more! bury me in the mountains, she requests. they are ravenous tonight, won’t be much left to bury. live the hour in the minute. suicidal tensions. high-octane melancholia leaking out of bullet holes. more enemies heads’ blow apart like pinatas full of red-stained ribbons. bathe that battlefield. as she sinks her machete under a shoulder blade her mind wanders to that phantom past. caressing a lover under the nightshade, long rotted. i want it, she says. please.