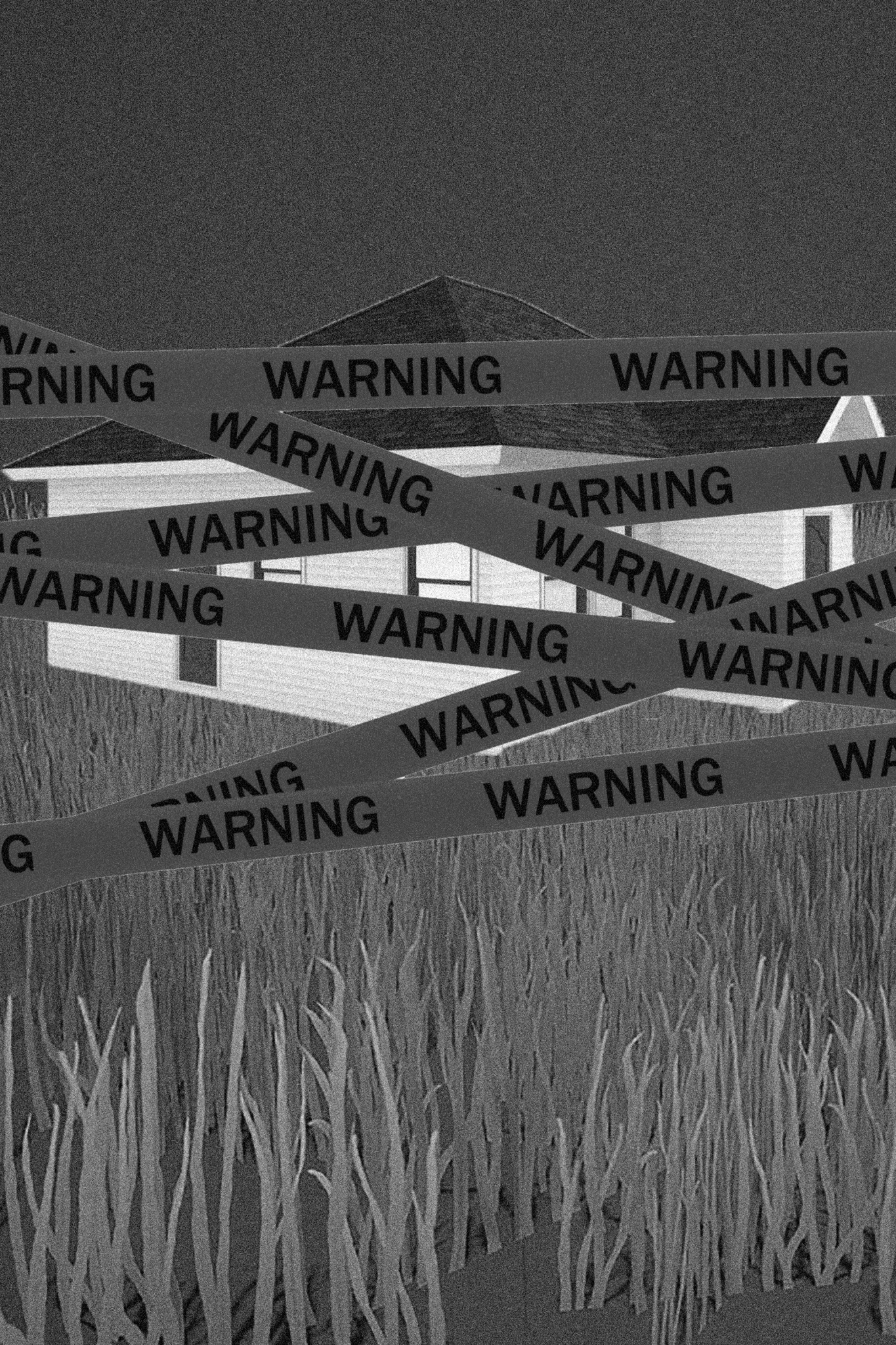 Drawn-water soaked into its own spongegrowth of mold. Humidity bred from a warm, moistured smell. Tiles softened like a mouth eschews teeth.

Until his lawn was sick with summer – the stems of grass distressed their stalks from hardened soil – and turned his neighbors’ thoughts upon the homeless – with sallow hair half-limed of keratin, scratching off their chaffglumed scabies – he lay balloon-burst in the bathtub, six weeks dead.

Appointed by resentment, vouched by the sheriff’s silence, the suburbs’ population is a posse comitatus – and the police their janitors.

The side of the house.

They squint through the gaps between blinds

Their children stood in the street shaking cans of soda until the bubbles tightened. Potentiate. Explosive. One increased the other’s agitation, so-on, so-on, and vice-versa, amassing the prime of riot: “the modality through which surplus is lived.” Surplus carbonation previously dispersed. Surplus hate bred in unsuspected manners. They spiked the cans against his roof. Amberorange dilute to mist abreast the evening. aἱuatoέooas. “Setting thus a sign.”

Someone kicked his door in.

Stripped his cladding with their fingernails.

The wood relieved of blood.

Prolapsed thresholds pulped in the breezeway.

(Think of a house without veins. It’s probably your own. Or a slate-gray square. Modern neutral. A table, a chair and no windows. Embrasures instead of doors. The air is modular. Clean it until you can hear bacteria seething up your body in the basement. Kill it with heatstroke as much as you want in the kitchen. Reinflate it later into something breathable. Fill the walls with nudity. Erase everything whenever.

Think of the house you grew up in. Where the drape-swaddled sun eased in warmth and your pets lay coddled in light. The television was patient, never gagging out life. Your videotapes weren’t abused by their footage. The house is still there. You can visit the surface. But the new dog has fur like cigarette ash and its owners have cozied their smell to the air. Don’t go inside. Save your nostalgia. No matter the season the house is patinad in Autumn.

You maintain their function. You live inside of habit.

Prior to his occupancy every tenant of the house was tortured. Repetitions were obstructed. Their stuff was rearranged.

They believed this was the house they would live in:

When this was the house they would live in:

Reaching for something whose presence you know but has vanished. As this is repeated, the disappearance of objects, psychic strain is pronounced in your body. Your muscle memory beings to spaghettify. Phantom limbs are loosestretched in your skin. You now guide your body as falling water is guided by ground: you receive the spill of motion.

Language becomes diffuse. Your predicament was expressed before, but you cannot understand:

(You assume a house engenders innocence. Within its walls you renew naivety. To commit violence anointed by privacy. This assumption of the house is heldover from childhood: when you believed the world excused your impulses.

As a child I would lay in the dark and imagine eating my house. I began on my belly and tore the carpet from its stapled mooring with my teeth. I swallowed it all whole. My thin frame contained totality. There was no negation. There was no digestion. My stomach was the Absolute. Instantaneous. Plotinus’ God. I tongued under the moulding and lapped the walls down my mouth. I opened wide and abgourged the house. I was immunity. Grown through the world. I was eternity.)

If he is a criminal, he explains, it is because he is addicted to pornography. He elides his crimes into something virtual. Inside his house he’s free.

On Google Street View his house is blurred. A solid ghost of pixels imprisoning a wound.

Virtually, the house has been deemed criminal.)

The house Renee and Fred live in no longer exists for them.

The walls are bowled from black like meniscus ribs and orthodontia.

The house was filmed.

The house was public.

Buried lesions you never knew could be exhumed culled from denied expectations.

The ricorso after mastery is the waiting between tenants, the absence of entertainment, the boredom.

The house is the house’s platonic object. Removing itself from the tenant, removing the tenant from itself, perfecting an altered teleology.

Too many dead humans are architecture’s suicide.)

The police have rubber gloves and incinerators. They have high-powered coffee makers that extinguish death’s smell. They brew the forty-eight hour blend. They open burr-holes in the neighborhood and let out all the gunk. They bandage the wound with falsified papers.

“The realtor will plant Astroturf. The house will be Pledged clean. Someone with children, a dog, and CD collection will move in and refrigerate their windows with television-blue.”

The police ladled the body into a plastic bag.

No one moved in.

And eventually was razed.