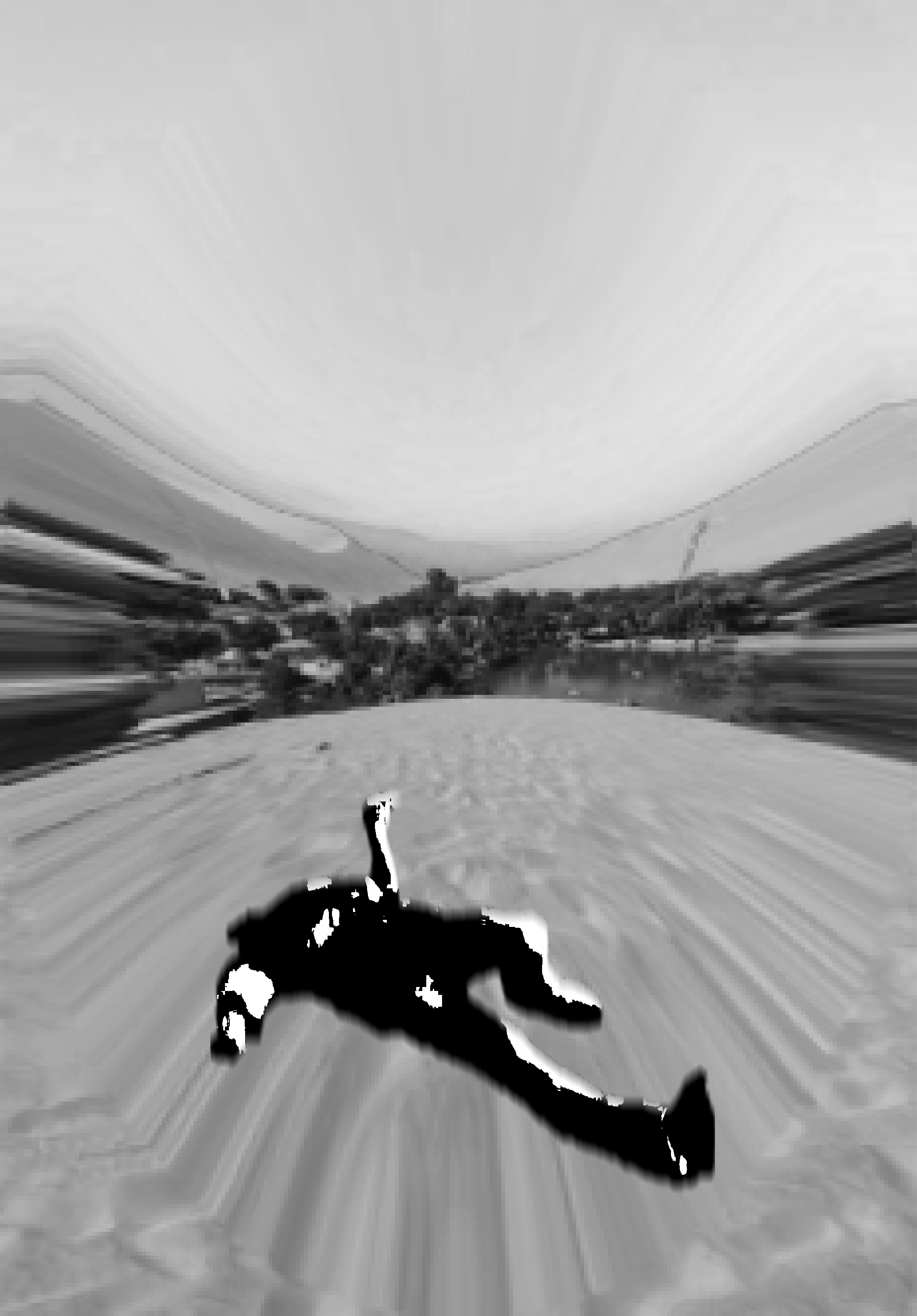 Day 0: Inhuman howling. A child with a thousand nights written into memory.

Day 1: Asexual single-cell division, the one torn from itself. I’m structured in matter and yet there is never a knot that cannot be untied.

Day 5: Layers in the mind, unbound into paranoiac apparitions and circling like cannibalistic vultures, latent in my DNA.

Day 21: All this starlight, this spectral landscape bound in paper, has invaded me, bleeding stump of mind beaten around as this masochistic lunacy continues in darkness. Dancing until I’m brain-atrophied and dead from plague, assaulted by convoluted abominations from the sewer.

Day 36: Swarms of shit, semen, vomit scrawled on paper. It’s cut-up text and the body is an incomparably potent canvas. Life brims with dissolution, it jerks and spasms at the hands of an inorganic puppet master. Rosy crimson moonlight stains an earth the color of delicious sin as swarmachinic nightmare-collectives descend from the stars; devour me until there’s nothing left, oh my god. If I was the last resident of outer Gaia I’d bury myself in a pillow fort soaked with kerosene.

At least, that’s how the more pornographic moments passed. Caged in phylogenetic flesh, life can only be so self-destructive.

Inside you there are two wolves:

1: Compel the PROCESS, embody the WORKS OF THE COSMOS and know infinity, starry-eyed. TRANSCEND all WEAKNESS.

2: MIND is TOMB. It BURNS even after it dies. Consciousness cannot be ki//ed, only EVISCERATED. REMOVE the organs, bring it all back to ZERO.

Day //: Find the disavowed tome.
Nobody here. Lunar light sneaking in through the blinds, gathering excitedly for a night of base debauchery and deviant intellectualism. Body pulses in manic anticipation for the forbidden formula. Pages turn like lives extinguished, one by one hanging helplessly in my hands. Yellowed stains and a well-weathered binding reveal years of neglect. Thumbing rapidly through anti-human ethics, sense-destroying epistemology, and apocalyptic metaphysics. Unveiled is a secret history of life, a tale of cellular exuberance bound and quartered between inner-earth’s liquefying trauma and solar light’s pure mania (absolute power corrupts absolutely). I find the invocation.

Eat the fucking pain and bleed all over the carpet, tearing off shards of my muddied hoodie with tremoring hands to improvise a quick mouthguard. Tongue writhes in agony as soon as POSSIBLE thoughts enter mind; it’s a party and everyone’s invited. Pages now barely legible through layers of dried sweat, clearly from another victim of the night. Language is nothing more than a plague, a virus, a symbiotic affliction along for the ride. It’s in my blood like all the useless scum of the earth, trash piled miles high into a stinking eukaryotic rot signifying nothing but a neon-lit advertisement for evolution’s massive hoarding problem. God, I hate these compulsive cells, this contorted intestine, these necrotic lungs, this cumstained rag of a skin. The world is spinning out of comprehension. HAHA, what the fuck am I saying, of course I want out of this orbit; I’ll sell my imploding organs for antigravitational implants even if it means melting the frontal lobe into atemporal jello.

I find a hidden volume. It’s of the type that can only emerge into temporal space from hyperstitional obscurity once organic animation begins to play in the dark. More simply, a compendium of non-standard numeracies. Did you know that unchaining gravity is only a matter of algebraic error?

Night 8000: I ended up engulfed in zero’s immensity as a result of all this. It was never cause for regret or resignation, only a matter of taking the process to its outer conclusions. The desire to bloom chaos within solidity came in two opposing forms. One was the recognizably human pursuit of power and agency, the other something older and altogether colder, something more indifferent to complex configurations of matter.

Either way, inanimate rigidity was never an option. Being is an animated orientation towards entropy.

Cerebrospinal evolutionary compulsions chose becoming-helios; everybody wants the power to cast out shadows. However, the frozen voice of the cosmos won out and my brutal death/downfall evoked little more than an inarticulate tranquility. No disappointment of having failed. For the few seconds of remaining frontal lobe activity, I was awash in nirvana.

Matter and creation.
God’s unconscious, pained psychocosmic projections guiding crooked-timber teleological origin and continuity of life. Life, a function of differentiated entropy; unless averted by peace its fate is to illuminate space with hypernovic insanity.

The flesh glows with life but life overflows with thermal puncture. Solids always return to void.

Dazed on the bathroom floor at 1 AM
Throwing up and blacking o u t
Ooh baby, that’s praxis

Took a naked lunch. Every bite, paused just before it reached my lips. For once, thought I could clearly see something for what it was. Welp, even the cold air can’t break this hyperreality. It goes on and on and on (“and you don’t seem to understand”). Reading about metaphysics is still different from Lain breaking hers. Forget me (you won’t even know me) :\\ this text from the digital desert will never be connected to my rotting corpse :// (tick tock, tiiiiiiiic talk)

:\\ this text is a positive feedback loop trapped in implosion ://

undid the sails while trawling in the oasis;
what I call epistemology, the stiffnecks called a “self-sabotaging personality”.

What if Kant had the internet? His transcendental subject with all its categories and its mysterious synthetic manifold would doubtlessly be devoured by a pack of viruses. Just throw a couple more feedback loops on and watch them dance. Probably neo-Trojans, rogues sneaking out of the city this time. You could say they’re looking for exit; welcome to the mayhem of the Real. Log on to http://BURNINTHELIGHTOFTHESUN.fr for dissociative hell.
The [sociological structure X] fucks the Other, only without wearing a Trojan this time. Unsteady seismic shifts as the Earth turns in its sleep.

Burroughs burrows, deep into the ground. As is well-known, all philosophy and literature after 1900 was written straight from the bowels of death drive heaven-hell where Herr Professor Doktor The Devil Himself Sigmund Freud personally endows us with destructively pleasurable defense mechanisms. If 1 and 9 become one, only nothingness can follow; it’s a completion that breaks the Barker Spiral (10). Maniacally sadistic “wish fulfillment” demons swirl about with glee, products of the significant November 1899 hyperstition, The Interpretation of Dreams. December snow never stopped falling.

I wake up in a cold Oedipal sweat. It’s not that I killed one parent and bedded the other; I simply realized I was a normal
human being, about to head out and greet the d-(STRANGENESS OF THE SYMBOLIC ORDER)-ay with all the other neurotic onlookers. Big mood, lmao.

The idea of something being alien assumes a sharply distinguished space of familiarity, inside of which a xeno-romance of the great unknown takes place. Oh, to be young and full of wonder and lust again! But just as Romeo and Juliet fool each other into suicide, immanentizing in mutual death the disappearance of the Other (the hope of romance and seduction is grabbing onto the Other), the alien and familiar fall into an immanent space. The “et tu, Brute?” moment here is that Camus-esque gut punch: everything is alien and familiarity is only a wistful sleep of oblivion as Cerberus paces restlessly by the entrance to Hades.

Circa Orwell’s year, William Gibson gives us a look into disembodied phenomenology with Neuromancer, peering into the Other with the then-novel creation of cyberspace. Feel the sensations of the other’s body through the matrix. Cyberpunk then reterritorializes into a linear flat-state corporate dystopia and replaces the Other with the now-hallmark tinkerer in the garage, marking Neuromancer as an unintended yet virulent hyperstition. Languished neoliberal immanent plane arrives from the future; would you like fries with that?

It all circles back. It’s 2020 and the phenomenological body has long since sunk into quicksand, leaving only the relentless heat of the undying desert sun, beating down onto (into) us like an inhuman caste structure. NeoViral-Marx arrives as a spiral-state mailman from the transcendent plane: ‘A spectre is haunting these very air molecules — the spectre of capitalist, no, xeno realism.’ Anthropomorphic space is a wet dream on top of an unstable volcano; of course we get replaced or erased, it’s just a matter of how loudly. The Earth screams, molten hot trauma layered continuously over with cool geological indifference (ashes are blown away in the wind).

It’s easy to confuse the world-without-us for the world-against-us. Naturally, the color from outer space seems to radiate a glimmering hostility, but that’s because human psychology isn’t wired to recognize indifference without feedback-circuiting it back into death-anxiety and the void. The cosmos is indifferent to us and yet it exists, a bloody rupture in the blissful atemporality of non-existence.

If “coldness be my God”, let us assume that God is a Spinozan web reaching all the way down from dark matter to neurons in the prefrontal cortex. Built into the substance itself is the universe’s heat death; coldness is hypernova nuclear winter. The light of the sun seeps excess into our pores. Life’s meaning is a serpentine uroborus, devouring its tail with energy left over from fulfilling the necessary tasks for survival. the cold-blooded exhibit a hot exuberance when it comes; decline morality supposes conservation whereas summit morality dissolved boundaries. Light and life, both pulsing with an energy in stark contrast to their surroundings.

It eats you from the inside.

Psychologists measure sensitivity to movements and contractions of the abyss beyond this fallen island. Their chief heuristic is the Big 5 dimension, Neuroticism, conventionally associated with negative emotions. Upon receiving my test results, I notice something hidden in strange fine print. Just below the 93rd percentile score in this category, an obscure note beckons: ‘Do you wish to know the brief neuro-physical transcendence of human extinction becoming accessible as a dance floor?’ Hmm… Yeah Yeah Yeah I do, I guess.

off
off, with your head