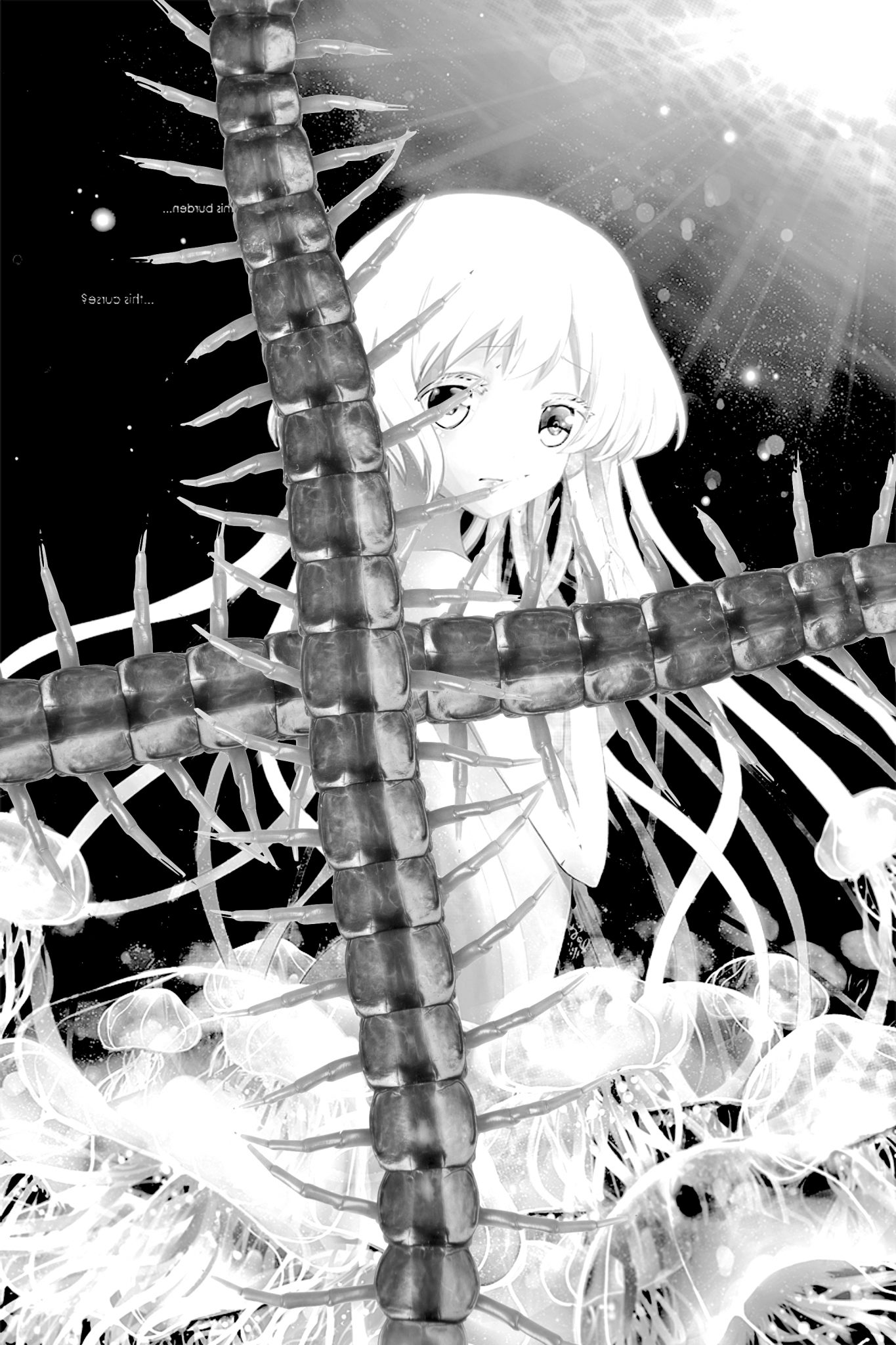 I
“It is common in the Orient to discover the inherent violence of ancient creatures,” said the narrator of a documentary. A woman struggled in a river at the bottom of a canyon. She remembered sleeping in a hotel with her grandmother, who was also sent to the river, but drowned. Giant jellyfish and squid groped at her dangling legs. The tremendous size of these fauna was common in the Orient, as opposed to the West, from which the woman originated. Time did not pass normally in this region. She described her supernal calm during this situation.

II
A philosopher and his poet friend went to a bordello. It was hexagonal and built into the wall of an underground city. The prostitutes were arranged in a circle of sarcophagi. The philosopher slid back one of the lids, revealing a flat stone surface with an embossment of the prostitute’s nervous system, and fell upon it. He ran his fingers along the nerves and laughed that this was all there is. His poet friend urged him to leave. He said the cops were coming and they needed to run. The philosopher couldn’t stop laughing. Later, it was heard the philosopher had disfigured his lover’s face with a hammer and disappeared.

III
I found a paperback novel on my shelf. It was a classic science fiction tale about the aggression of ancient creatures. The cover was a drawing of a gigantic ape in a pickelhaube battling several men with a spear. I had seen it before, but still not opened it. I seemed to remember much of its narrative, which appeared before my closed eyes in a series of moonlit vignettes.

IV
I was restless through the night. With each dream I went deeper into the underground city. The walls were blotched silver, dark green, and black. The demons of each realm grew more and more obscure. Their forms of torture were ordered according to the hierarchy of esoteric bodies. The first realm was physical, the second emotional, and the third aetheric. These spiritual tortures were the most terrible to me. They were indistinguishable from waking realities, sometimes taking the form of lifespans without memory. They consisted of perverting the subject’s higher intuition. The capacity to project into the future was tied and stitched as in a sterilizing operation. This was performed by the mind of a primordial spirit immured in the depths of a silent lake. I came to know a strange solace in this deprivation by which the demons reconciled to their existence.
V
I was taken to a secret chamber rented by a criminal organization that belonged to the world of the invisible. They showed me a sickly-green aquarium that housed a sessile organism growing along a slanted surface. It resembled a cephalopod and had been imported supposedly from outer space. The digestive system was mostly external. I learned that to be fed to this creature was the highest form of execution by the organization. The organism excreted a chemical that paralyzed the victim but allowed them to continue breathing underwater. It would be placed facing outwards so that members of the organization could look into its eyes during the process. The mode of digestion was mysterious to me. The organism released objects like marbles from tubular appendages on both sides of its body that rolled down grooves and aided in dissolving its prey. It would be pulled in half from the middle of its skull to its pelvis over a matter of weeks. The victim would be hypnagogic for the majority of this time. Terror, pain, and incomprehension could be read in its face, even as it was split in two. I stared into the eyes of a poor soul whose gender and expression were no longer recognizable, being near complete disintegration. I woke with a familiar nausea that used to make me think I had swallowed a bug in my sleep when I was a kid.