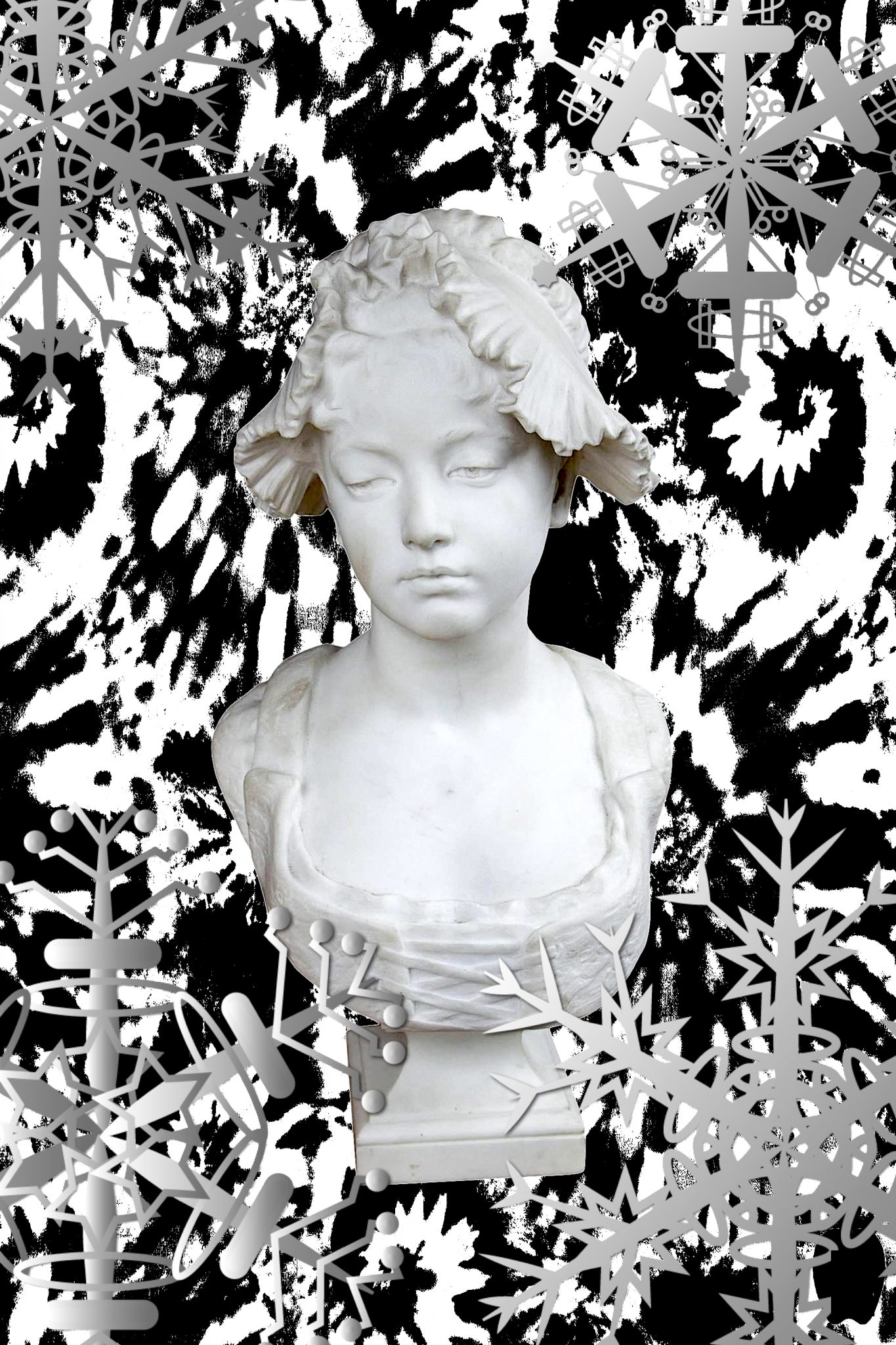 Lola could feel the effects of the drug almost instantly, in her root chakra and then also in that one above the root chakra, what’s it called, but also just straight up shooting ricocheting up the whole damn spine, the whole misty brainfuck of the kabbalistic tree, every single chakra and microchakra exploding up to her head blasting out into the spinning, dizzy, jouissancing schreber-stars, the stars striding heroically in their swift constellations, those muscles of arno breker microfascist masculine flexing in that giant fuck of distance that separated her from some kind of cosmic abyss too abstract to fathom. Then again maybe this is just a sort of metaphysical-hyperbolic exaggeration because the feeling could also have been described as just a sort of a warmish glow in the pit of her stomach. But still… This 2CE, combined with the Robert Desnos she had been reading just before, she felt free, unhinged, unhindered, unencumbered, let-loose, wild, cosmic, redolent, insane!

She watched a YouTube video of Sophie performing at LadyLand in Brooklyn on 23 June 2018. Sophie looked like a trans female version of the actor Michael Shannon. Why was she seeing this resemblance? Shannon was like the Clint Eastwood of his generation and yet in Sophie’s cheekbones… that same hardness, that same jaded serial-killer jaded sandblast of actual reality having taken its toll, real violence having swept away all human actors and and and and now controlling some grimly harnessed serpent of power that required a lot of concentration to hold in check. Lola called it the “frown of the face’s undoing”, which was also the name of a black metal band she sometimes led. Lola noticed this look as well on cisgendered musicians that inspired her like Dominick Fernow or Charlie Looker. She also called this musical tendency post-goth or neo-Wagnerian hyper-punk.“The Buddha of Noise,” is what her media theory professor at Princeton, Tom Levin, had once called Fernow, partly ironically, maybe. Well I guess Sophie is the Buddha of house music then, thought Lola, the Buddha of Techno. There was a darkness to Sophie, not just to her production, to her body. Not a bad darkness but an antinomian, messianic darkness that Lola, who was also trans and sometimes did drag performances under the name Candy Rhizomatic, felt was endemic to all queer and or non-binary youth, perhaps starting with the famous Schreber case (at least that was the proper name Lola used as a marker for trans_year_zero, the time of the dark god of gendertwisted jouissance; with Schreber the death of God completed itself as viral exoskeletal femininity, viral cuntmatter drifting into the tubes of the curves of the hypnohusk of a messianic corpse, or so claimed Lola in her more schizzed out deterritorialized rants; Hans Bellmer’s puppets, their perfect geometry, Lichtenstein’s deterritorialization of the romance comic, hentai, the anime machine, etc etc, hyperreal ahegao e girl post-klossowsi phantasms, belle delphine and all the rest). Lola thought of so-called transexuality as a kind of “necropolitical hacktivism,” and “hyperreal deterritorialization” and “the twist of the cut of the face of the cunt” that revealed “the omnipotence of the hyperbolic imagination.” She had phrases from Deleuze’s famous Proust book tattooed all over her body.

Later in the evening after much coke and ketamine had been imbibed, Lola and her friends, who always tried to stay up on their popular culture (they had an almost Adorno esque tendency towards critique which sometimes got them into a whole lotta trouble], watched the music video to “Without Love” by Alice Glass, who for Lola was a veritable fashion icon, a sucked-dry body, an organless, anorexic goth-subject-unto-death and , for Lola, the central object of elaborate fantasies involving plots from the novels of Maurice Blanchot entangled with True Crime stuff Lola obsessively read and in these fantasies Lola and Alice would re-enact passages from Thomas L’Obscur and Aminidab and Le Plus Haut. Lola copied Alice’s exact movements as the video played, which movements she had already practiced through hours of repetitive viewing of this same video which she also subjected to Adorno-esque critique and Brechtian deconstruction even when she wasn’t with her critical-theory nerd friends (unsurprisingly most of them were jewish or had jew-esque proclivities). She twisted and flexed and looked ecstatic while her friends watched and did drugs. “THIS IS REAL,” claimed Lola, “THIS IS RITUALISTIC,” “THIS IS THE ABSOLUTE BECOME SUBJECT,” “THIS IS THE LACANIAN REAL.” It was hard to live up to the death drive of the song, said everyone, its capitalist sorcery was on a level only the most powerful kabbalists could fathom, but Lola pulled it off, seemingly, almost. Lola staggered around like a zombie, or like a character in a zombie movie, it was like she was performing some kind of fundamental zombie essence, right there, right before their eyes. Lola rolled her eyes and moaned. Lola wanted to be strapped down, she said, she wanted to be… urggg, ABUSED. “WHY CAN’T LIFE BE LIKE THE MOST HIGH BY MAURICE BLANCHOT” (a book she had fetishistically cathected and which for her constituted “the absolute horizon for all literature” , a claim she would argue into the wee hours of the morning if you let her] “I AM HENRI SORGE!!! I AM THOMAS!!!” she screamed insanely, “I AM THOMAS THE OBSCURE!!!”

Lola jumped up and while everyone watched dumbfounded she started to writhe even more epileptically to the piercing tones of the goth love/hate song (penned by Alice Glass as a rancidly bitter break-up ditty) “STILLBIRTH”. “SEE ME!!!” she screamed. “DISSOLVE WITH ME!” she shrieked “DISSOLVE WITH ME! YOU ARE THE MOST HIGH! YOU ARE THE MOST HIGH!!!”

It started to rain and a dangerous lightning storm made its way through the area. “The most goth is more like it” chuckled Chuck, the resident jokester. “Shut up, she’s being like, really authentic right now,” said Selena, who believed in astrology and sincerity.

Elvira tripped and broke a vase. “Shit, sorry guys. Idk guys, is this really what goth is about? This is scaring me!”

Lola’s other friends tended to share this tone of confused concern. “Listen honey,” said Justin, “Everything is fine, nothing is weird, you’re just getting a little over-excited, alright? Calm down and smoke some more weed, you’ll be totally okay, we’ll break out the ouija board if you want, and I even have some Risperidone if you want to take some, you seem, like honestly you seem kind of schizzed out right now…”

“Look babe,” said Melanie, “Your energy is all over the place right now, maybe you should do, like, just a little bit of yoga or something, I can walk you through some of the more crucial asanas,”

“I actually know a little bit of reiki…” chimed in Clive.

“FUCK YOU!!! I’M DEFINITELY QUEER!!! I’M ABNORMAL!!!!” shrieked Lola, spasming like an old-school witch or a cataleptic nun in the process of levitating, which for all those in attendance (wasn’t this just supposed to be a chill goth sleep over?] prolonged the cringiness and horror and just general dismay that everyone was feeling about her sudden hysterical freakout and break with normal goth teen protocol not to mention the reality principle. A bolt of lightning struck the tree that was out in the front yard and as the branches crashed onto the upper levels of the house Lola seized this crooked iridescent knife that Frown of The Face’s Undoing had used the other day in a super cute music video for their badass af doom metal track, but this time her look was less “ahegao face” and more “possessed witch” and she stabbed first her arm, then the side of her neck, then her chest and finally someone wrested it out of her grasp but total chaos had broken loose and roughly half the people present were screaming uncontrollably. The people who had wrested the knife away beamed like heroes, like cops who had just prevented the commission of a crime, and Lola’s wounds weren’t that bad fortunately, but now she was sobbing uncontrollably herself. She wobbled into the center of the room and, her eyes rolling up towards the ceiling, she mumbled something like “i’m not god, i promise, i promise, i’m not god. it’s not supposed to be like this. culture and… technology just… but i’m not god, i can’t fix it.” After that she was inconsolable.

In the hospital the fractals of her mind warped deeper. She drooled. She was medicated deeper and deeper into… into an utter rigid trance, into total ergonomic fixation on surfaces. She blacked out. New personalities emerged. She could manically manage the people around her, a kind of twitchy innuendo that let her mischievously sneak her ideas into almost any context, syntactically speaking. She could pretend to fit in, in other words, she could blend, mesh, insinuate herself into any situation. But the snap that snapped that one night in her synapses with the music and the lightning and the ungodly cataleptic rigid rage that came from the outside and not from any human world would never get glued back together or rearranged to make her seem like she wasn’t just some shambling thing with a taped on nose and eyes glued to look real and teeth attached at the joint so that they smiled just right. And some nights, thank God, there were people who understood. That she was THE MOST HIGH. It wasn’t just a goth thing. She wasn’t just this ugly un-Instagrammable weirdo. Some people could dig it. She WAS the most high. SHE WAS THE MOST HIGH. Holy shit. And she carved the runes into her arm and she walked out into the sun when her discharge papers came through completely barefoot not even noticing she was trailing through puddles to get to the taxi where

“AND I WANTED TO TOUCH THEM, TO RUB MY FOREHEAD INTO THEIR FOREHEAD!”.

“SEE!!! MY MIND AND YOUR MIND ARE THE SAME MIND!!! KETHER AND MALKUTH ARE MARRIED!!! THE SOUL HAS NO GENDER!!! I’M YOURS TO USE !! USE ME HOWEVER, WHENEVER YOU PLEASE!!! I AM JUST A LIMP, A LIMP, A LIMP… I LIMP THING, I’M A, I’M A PUPPET… OH GOD… OH GOD… IF GOD EXISTED, IF GOD COULD SEE THIS, GOD WOULD BE, WOULD BE…” Her eyes seemed to fracture and point in impossible directions, or to reflect light in a way that was impossible. “IF GOD EXISTED, HE WOULD BE ME.”

A series of worms crawled out of a sprawling gaping hole in the internet, each more genderqueer than the last, branching fractal heads chattering chittering teethteethteeth

teeth witch with a grosz face

my misty eyed tears mean nothing

lenin wouldn’t listen to beethoven because it made him soft

i’m sorry but i love you

what is this stupid desperate

why do i sob and post memes day in day out

am i the most high?

I looked at the bottle of cheap 20 dollar wine I was drinking, VOGA™ Italia Red Infusion. It was almost empty. When it was done I was going to go to some secret place that…. that was just… it was just my…. my place…. my place….. and I would….. I would smash the bottle. After drinking the contents and somehow that would… seal… in…. some sort of …. secret. bound. bonded. starbond. galaxybond. glass_shatter_star_bond.exe

The secret sealed in and his heart slashed in half.

The secret sealed in and his heart slashed in half.

His heart slashed in half.

The other half is for you.

The other half is for you.