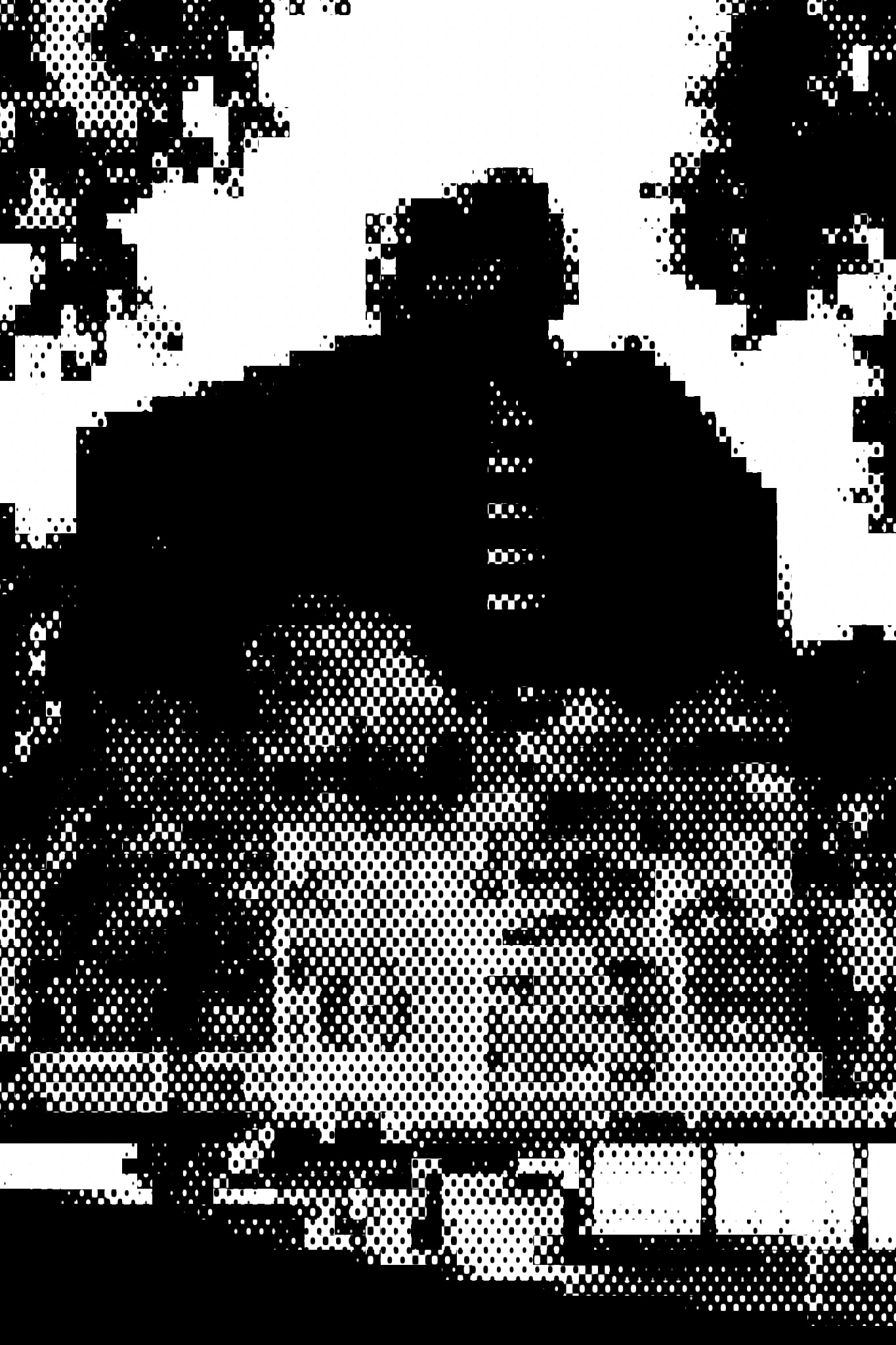 The body was a body but somebody had dressed it up in an alive kids clothing. Nobody in the room really knew what to do with it. Somebody said that because the group had stumbled across it we could call the kid ours. Something traced the outline of his jaw in its notebook and we started to believe that was real. It was as real as we wanted it to be. The building knew somebody was coming, it seemed. The door was lying open at arrival with a big slit down the middle like a wound that we couldn’t quite see. For a while it seemed that door was plastered on the kid’s face and his nose was a slit we could have slipped inside and rented out for our own use. Somebody pulled out a phone to call the cops but the reception was shit from downstairs and their questions would have been impossible to answer anyway. Nobody was supposed to be here. Here was a place just for us and only at nighttime. But now something had ruined it, something that we did not want had wormed its way inside our space and we couldn’t quite map its geometry we had to move around it. It was an object that one of us could trace like the outline of a shoddy circle but not quite accurately draw. This was a place that had been a home and now something had ruined it.

The body was a body but somebody had taken its shoes. If he had wanted them then someone would have bought him shoes. So somebody had taken his shoes and we had never seen a body before. The building had three stories but only one of them was mapped anywhere other than our minds. In our memories the adults drink aperitifs on the mezzanine while at the kiddie table we talk about what we maybe could do after dessert. Of course dessert used to eat us faster than we could eat it and our plans were thwarted by our revolting stomachs. We played downstairs with the rats. One day there was an accident. One of the broken floorboards gave way and an immediate scream had all the mothers on their feet. After some poking around one of the dads smashed a hole in the wall with a naive hammer and uncovered a dumbwaiter like we were in a horror movie or a gothic romance novel about to deliver a note of adoration to an unnecessarily imprisoned lover. But we were not about to deliver a love note and later that day everyone would be crowded in the children’s ward of the hospital waiting room doing exactly that until someone could tell us what had happened and we could all go home crying.

The body was a body but it didn’t look like a photograph. It had taken us ages to find our way down here. It had taken us long enough to make our way here while no one was with us. All of the adults had told us they were selling the place and we were not to come back here. It just sat on the corner like something we couldn’t get over and had to deal with on our own. We had spent so much time in the walls it was hard to pretend we weren’t interested in going back. We made plans to get back together and find something that mattered to us. We all knew what the kid had looked like before the fall and we all knew what a body was supposed to do but instead for whatever reason he seemed gift wrapped and bisected like something we might have studied in geometry class. It was not the kid we had known. It was not the shell that hung from monkey bars and slipped its fingers into its pocket to pull out a coin like it was rich. It was not the thing that wanted a shiny bike for its birthday so badly even though it was happy anyway. It was not the kind of injury you get from a fall. It seemed like something had touched him in ways we hadn’t learned to imagine yet. It had been our hiding place but now we knew that something had been there watching us. It had been ours but now we knew we were only visiting. We were on vacation in somebody else’s room. For some reason it was smiling at us. It was like a work of art. It was like something you could have looked at all day. You might even want to reproduce it so badly you’d find something similar on your own body later on. It was the kind of toy that made you want to meet its maker. It was smiling at you. That’s what it seemed like.

The body was a body but somebody had made it so and somebody had done it without a diagram. School had told everyone all about shapes and numbers and mathematics and grammar but school had ignored the thing we wanted most to know. It seemed like you couldn’t show it you were scared. If you were scared it would take longer to eat you. So many of us drew pictures but did not know how to talk back then. It was like nothing had taught us how to speak and we hadn’t learned enough of our own language to put into words what we were seeing.

The body was a body and none of us knew how to say it.

The body was a body and we drew its fucking jaw. It was the kind of injury you could get from a fall and none of us knew it. We made up monsters and stories. We made ourselves up. We didn’t know what to do. It was right in front of us and we had nothing to draw. After a while this thing took up residence in the bedrooms of neighborhood houses with smiles on the front door knockers. It seemed to grow when anyone turned their back. When you were asked about it you were supposed to say, oh, how terrible what happened. The thing on the floor wouldn’t even go up the vacuum cleaner. We got bored and were not allowed out to play. The thing took up residence in our newspapers. The thing even made it public in half facts. Everyone thought they knew something nobody else did. The facts were all the same and everything else was imaginary. One day the cops went round the suburb’s doorsteps to ask lots of questions and we all stuttered like we’d done it. We were awestruck by the fact it was in the newspaper and on television. The leader spoke some empty words. The memorial happens because they’re a kid. It seems we were all interesting and we all had faith and we all asked the right questions. That was because we already knew the answers. What used to be its head had lain askew under the rafters. The television told us it was missing. Some fathers read us The Body. It was like that story had become alive around the city.

The body was a body and we’d found it accidentally. One of its legs was missing, but none of us could be sure. The dental office had it muddled with images from the nurse’s chair, injections and jabs and shots and the like, and this little circle in its arm like someone had injected it with something real good to make it better fix it.

The body was a body and somebody had tried to fix it. Some mecca of existence seemed to have formed once the body was seen acknowledged and then accepted. It was ontological proof that we could keep going on. The words seemed to throw up the flow of divine intervention. They kept coming and wouldn’t stop.

The body was a body somebody was turning into a story.