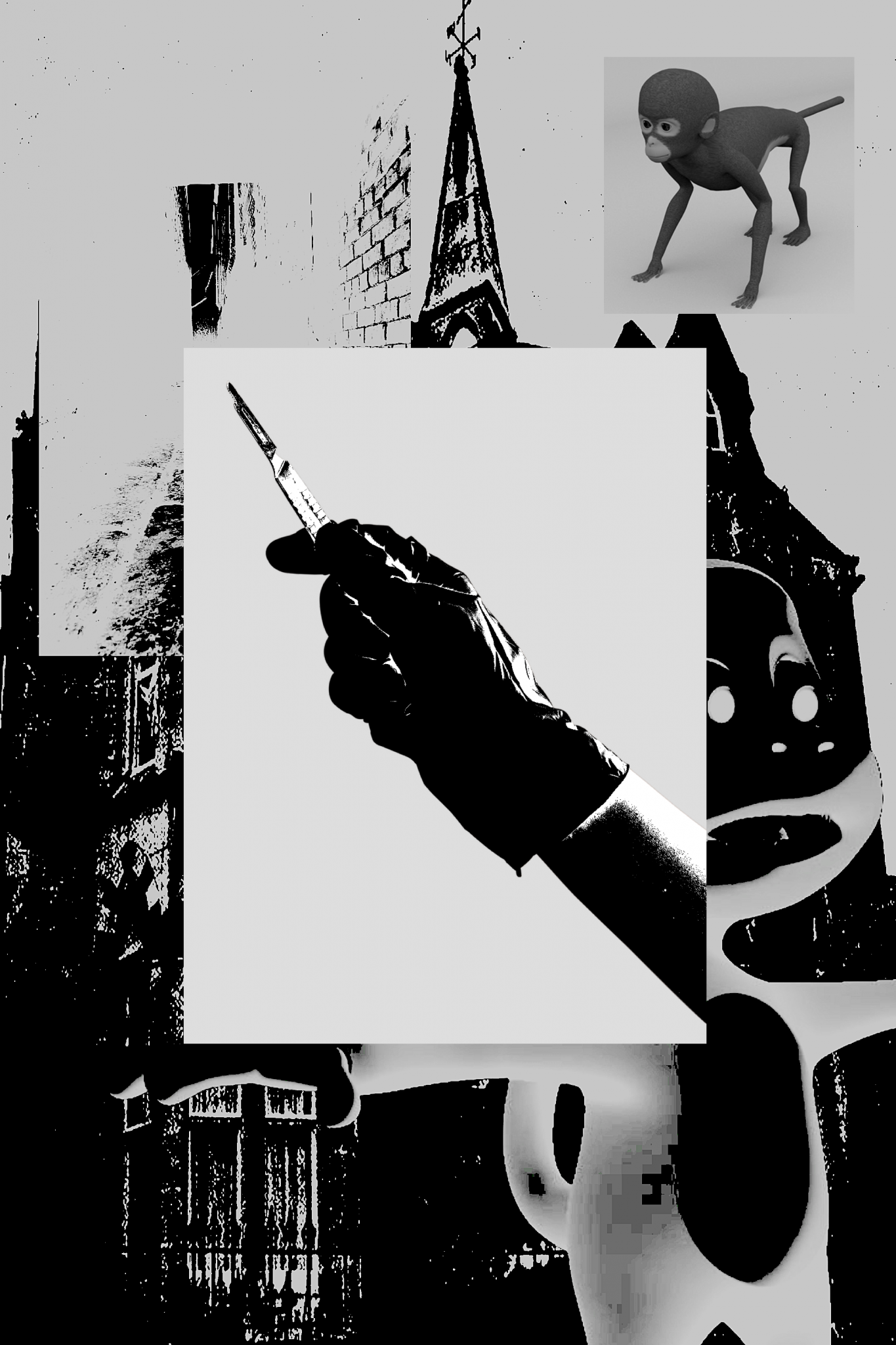 It makes her shudder to think of it now, when she walks past that austere Victorian Gothic mansion with its peaked roof, like the Dutch girl’s hat on the can of kitchen cleanser. She used to see him in the big bay window when she walked by at night. He was sitting at his desk with his back to her, in a nicely tailored suit, and she remembered how his tanned hands made a tipi as he studied a case of law. His golden pageboy was curled under, touching the collar of his suit. It was like an Edward Hopper painting, this sexy lawyer sitting alone at a desk, lit by electric lights. Outside on the sidewalk, a young woman peers at him, her breath making a cloud in the gloom. He used to come into the basement nightclub where she worked.

The young woman, Deirdre, was right out of college. And she was still going through culture shock, adjusting to the thin, meager world of reality from the brainy environment she had been in for four years. Deirdre was working at that basement nightclub because she couldn’t find a job that required a college education, though she had applied also to the history museum. The Director, an anthropologist who had once spoken to her Anthro class at the college, told them to drop in anytime. But when she did, her staff gave her the bum’s rush and told her she needed an appointment. She didn’t go back. Waitressing just paid the bills. But the basement night club made such a vivid impression on her. Perhaps because she hated it.

She still had the matter of one incomplete grade at college, an independent study. Then she could graduate. The corpse was stinky and decomposed because it had not been preserved in formaldehyde. Keeping cool in the biology lab fridge when she wasn’t working on it, she dissected it under a ventilator hood because of the smell. It had been gutted for autopsy from this research institute near her college, where they did such things as deprive rhesus infants of their mothers and then discover, lo and behold, they were socially deficient. Actually she applied for a job there. Another job she didn’t get. She felt pretty bad for this monkey, that had bruises under its skin and never got to have any freedom. Plus she was a vegetarian at the time. She never did figure out how she was going to handle that job.

While at school, she had already dissected the musculoskeletal systems of that rhesus monkey. But she had yet to take it down to the bones and give it to the anthropology museum on campus, because that’s how she had designed the independent study course. She kept it out on her porch in the frozen Wisconsin winter. Deirdre did feel a kind of Nazi satisfaction in cutting off his penis. Of course he was dead and eviscerated when she got him, but still it was weird.

“I’m usually pretty juicy.” That’s what Judy said, another gal who worked there, when she asked her how she got lubricated to have sex for money. Not part of that awful job in the basement night club. Definitely not. But Judy tricked on the side and also, or perhaps because of it, she had a smack habit. Judy made good money at tricking.

Deirdre used to daydream about how many tricks it would take her to pay her rent, were she so inclined. Only three. But she never tried it. Judy had a Louisiana Creole boyfriend, Baptiste, a bloodsucker and fellow smackhead, who stole a twenty out of Deirdre’s purse one time, which Judy paid back when Deirdre told her about it. “I’m going to go to school to be a jeweler,” Judy said with such conviction several times, so Deirdre could tell it was never going to happen. Deirdre wanted to help Judy, but she didn’t know where to start. Once she went with her to Judy’s mom’s house, who was crocheting an afghan as she talked to us. Her mom seemed to have no inkling of the dark side of her daughter’s life. Except the feeling of suppressed anger in the house was so thick you could stuff a hundred bras with it.

One night as she stood in the club leaning against a post, smoking a Marlboro, gazing at the crowd and the band, and thought “God, I hate myself!”

A singer in the band romanced her for the second half of the only week they were engaged at the nightclub. A white guy with a big ‘fro and a long nose, he had a stupid bulb on the end like a clown. She broke her rule – only to sleep with guys who look like underwear models. She remembers the lead guitarist looking at her and saying, “Next town, I’m going to get me a honey right away!” So that’s all she was to them. She thought she was a college graduate.

Unlike that dopey musician, the lawyer seemed so sophisticated. Even his name was sophisticated, Darton Bonheur III. He had a nice, smooth body, too, and he was tan in the winter. He used to come in, order drinks and flirt with her. Deirdre found it very flattering, particularly given the circumstances of hating her job and her life in general. Never being able to bring herself to actually get involved with a man that got really sloshed, she knew better. She had grown up with an alcoholic. From first hand experience she knew that a drunk could become volatile and really mean. This guy drank heavily, but seemed to hold his liquor well. She was wondering how to get him into bed.

Then one night a couple of guys, one with dyed black hair and the other chubby and mostly bald, came into the downstairs bar and started throwing money around and wanted to know where they could buy a girl. Deirdre was intrigued by the experience of going to bed with someone for money. No kidding. She actually thought that would be interesting! When she talked to Judy, she told her to find out how much they were going to pay for two. They said fifty each. She went back to Judy and she said to set it up, so she did. Boy was Deirdre ever stupid, ’cause later she learned if they’d been cops she’d have been busted.

And then Darton came into the bar. Clamping his hand on her wrist, he pulled her down to him at his table and whispered hotly, “I’m taking you home!” and Frenched her ear. That got her. So Judy wound up taking care of both of the guys, except she said the bald guy only wanted to pay $25 and that wasn’t enough, so she only did the guy with the dyed hair.

Deirdre went home with Darton that night. In the wee hours of the morning, they walked up through the pink arches hulking above the entrance, into the brooding Queen Anne mansion, where he lived with a bunch of other guys who were nowhere to be seen at that late hour. The mansion was a lumbering affair situated right next to the severe Gothic one he worked in. An onion roof capped a two story tower and copper fru-fru lurked under the eaves. A magnificent house and he would have made a magnificent catch, but, but, but, she didn’t care about such things. She just wanted a lover to blow her socks off.

He lit a fire. They kissed a long time in front of the fireplace in the living room, under the stained glass window with its profusion of magnolias. Under her fingers, his page boy felt soft and golden and reminded her of the Dutch Boy, you know, the cute innocent little boy on the can of paint. And his entire body was tanned and firm. He was so hot!

But then he rubbed the entire length of his arm across her vulva. He rubbed her with his whole arm, including the hairs, and left her completely dry. And then she let him fuck her like that. Boy was that a dry fuck, like new sneakers on a freshly varnished gym floor. She was confused. She liked him and all, but Jesus! Afterwards, they went to his bedroom in the dark. He fell asleep, while she lay there and wondered why he had rubbed her raw. Was he so drunk he didn’t know better? Or was that how he did it?

When Deirdre woke up the next day, she saw in the early morning light he had these aggressive, larger-than-life paintings of heads, like five or six of them from the same artist, hanging on his walls. They all stared out of the canvases at her. They were angry, angry, angry. Deirdre thought she might be murdered in his bed. Inside her lower lips, she was completely swollen and really didn’t want to be there when he woke up wanted to do it again and then maybe kill her.

As she listened to him snore rhythmically in his hung-over sleep, she got out of bed and dressed surreptitiously and tip-toed the fuck out of there. She walked the few blocks home in the early light, groggy from just a few hours of sleep but glad to be alive. Now, when she walks past those two gorgeous mansions, side by side, she has one big shudder of revulsion.

Then a couple of days later, when the swelling had almost gone, she felt sorry for him. Maybe she had made him feel bad. So she left a bouquet of wild flowers on the back steps of his house, which she had bought at a florists’ shop and a note. Like, what was she thinking? He didn’t respond.

Then another time, he was pounding on Deirdre’s fourth story apartment door in the middle of the night. She still had the same job in that basement shithole. She let him in, even though he had recently stared at her breasts in the club and told her, “We both know those are fake.” Right away, he fucked on her single mattress on the floor. He didn’t do that rubbing thing again with his whole arm. When he climaxed he said in kind of a strangled whisper, “I love fucking you!” or did he just say, “I love fucking”?

She looked him up once a few years ago on Facebook, but he must have died by then, because he wasn’t on Facebook. There’s not even anyone with the same name. What happened to him? Did he crash his car? Or did he drive home drunk and pass out in the driveway and freeze to death? Maybe he was murdered.

Deirdre wound up boiling that stinking monkey over a hot plate out on the porch, to clean the flesh off the bones and turned it in for her grade. The rest of the monkey she threw away in seven black plastic garbage bags.