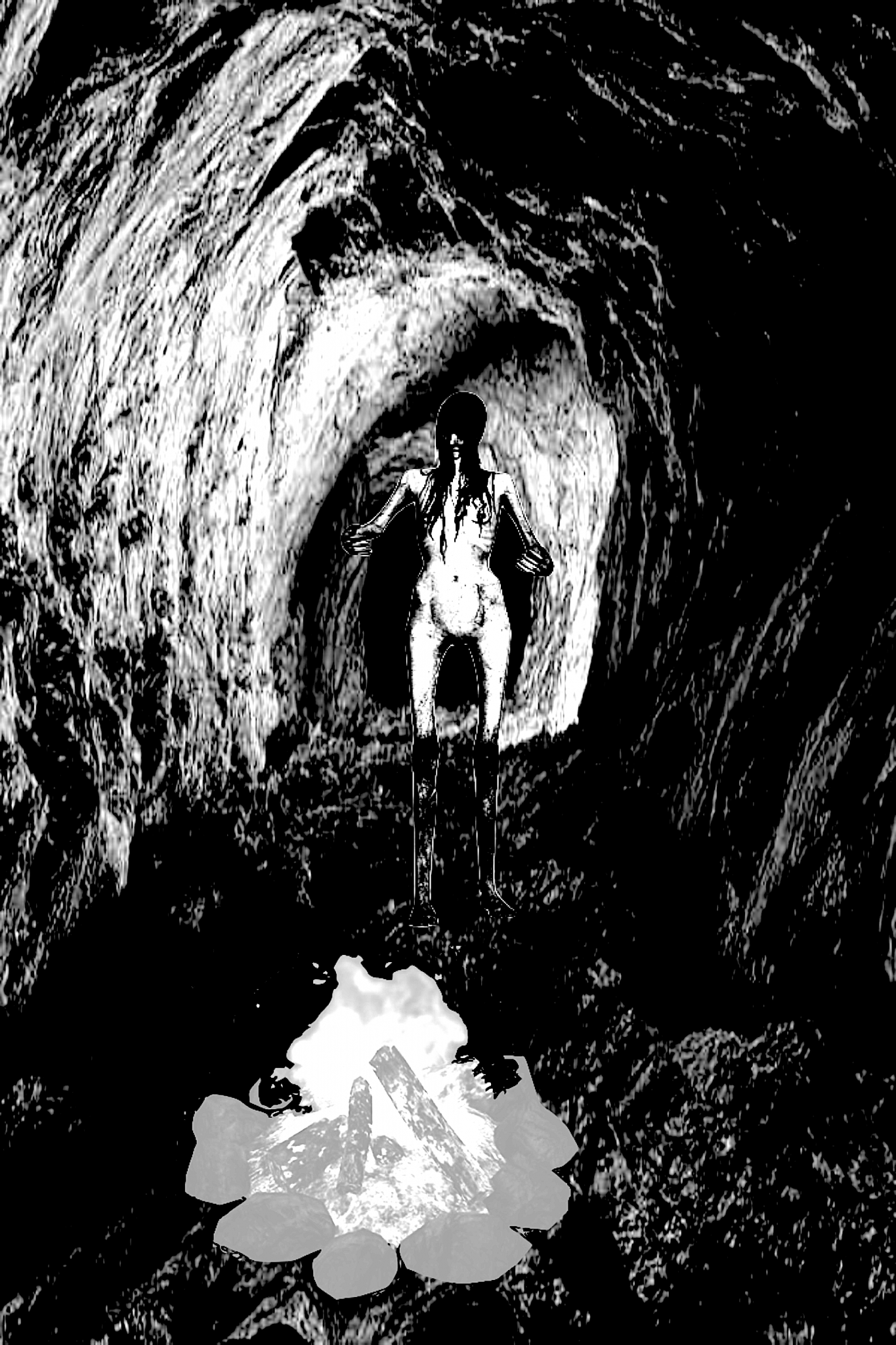 How many staircases has she been carried down

how many cold steps of rough-hewn stone

into how many dank cellars

transported across how many moonlit moors towards how many castles, cemeteries, ancient mausoleums, abandoned construction sites and midnight back alleys?

How many times has she been cradled in the arms of some hulking goon, priapic vampire, lunatic henchman Frankensteinian monster, lifted over how many thresholds like a bride, but always unconscious

of muscle, bone or moldering flesh

to meet her softcore fate?

How many walls has she been shackled to

drawn up by chains and ropes on tiptoes

how many pagan altars has she been staked out upon

how many times has her blood been drained by some suave bisexual aristocrat,

some Count or Countess Bathory

how many times has she fallen the pretty prey to the overly complicated machinations of a madman from the wax museum?

Trapped on uncharted desert islands, in dusty claustrophobic towns cut off from anywhere, stranded in the last motel for miles around with a black storm rolling in from out of nowhere relentless and about to break like all Hell itself.

Hopelessly lost, she inevitably finds herself

in the place at the end of every wrong turn

or overheated engine away from every homicidal drifter, lost within walking distance of every ominous house on the hill, dilapidated farm, or Civil War manse that resurrects itself once, every hundred and thirty years, to wet itself with Yankee blood.

For that matter, how many times

has she come upon the ghost of some unhappy ancestor in the attic, stumbled upon the bones in the cellar?

how many times has she thoughtfully chewed some succulent morsel off the elegant fork of the high-and-mighty and asked, “This meat…

why, it has such an unusual flavor.

I don’t think I’ve ever had anything quite like it before. What is it?”

only to have some parched and powdered dowager lizard wearing heirloom pearls smile and with withering condescension and haughty amusement answer “Well, my dear, if I’m not mistaken, when you arrived I believe you called it, Tammy?”

Laughter and vomiting follow–two sounds not as incompatible as they might at first pass seem.

No, quite a bit alike, they are, after all.

beheaded with axes and chainsaws,

run down in cornfields by farm combines driven by lunatics wearing shriveled masks of human flesh,

garroted with her own still-warm silk stockings.

Electrocuted by means of the most improbable accidents, eaten by ants, cocooned by spiders, at the center of the feverishly winged vortex of every inexplicable frenzy of birds.

Tied to wagons wheels set afire and rolled down bumpy hills, swallowed whole by enormous snakes, torn to a bloody froth by sharks, nature bursting forth red from inside her, red, as it is often said, in tooth and claw.

Why, he has his father’s eyes, my dear!

The world is haunted with such dead presences, even inanimate objects, inspirited, can come alive and start wreaking havoc with malevolent intent.

Automobiles with minds of their own, power sanders with attitude, computers with messianic complexes–it’s the kind of world where you don’t dare put your pencil down for fear it will get back up and turn it’s eraser on you.

every box that remains unopened,

every floorboard’s hesitant groan and creak,

all the covert glances, vanishing smiles, half-heard conversations—is it paranoia, after all, or its dismissal that you must learn to counteract, and, if so,

how, and how can it make any difference when the script itself calls for you to break the heel of your stiletto pump and stumble while fleeing the retarded son with scissor hands, how can you escape when your doom is written like a genotype right there into Scene 17, how can you even hope to live long enough to see “The End”

when you know damn well that you’re scripted to die at the the 36th minute every single time?

Does time repeat itself, then, or just stand still?

Do all the events of our lives come round again (and again) like a merry-go-round where nothing is all too merry?

What we are waiting for, it often seems, is for the sun,

like the glowing tip of the master interrogator’s cigarette

leaving nothing but ashes and a comet trail of bitter smoke, but that, of course, is another movie altogether,

one not given us yet to view, though the coming attractions have created quite a buzz, they’re looking good, oh yes, baby, they are, just you wait and see.