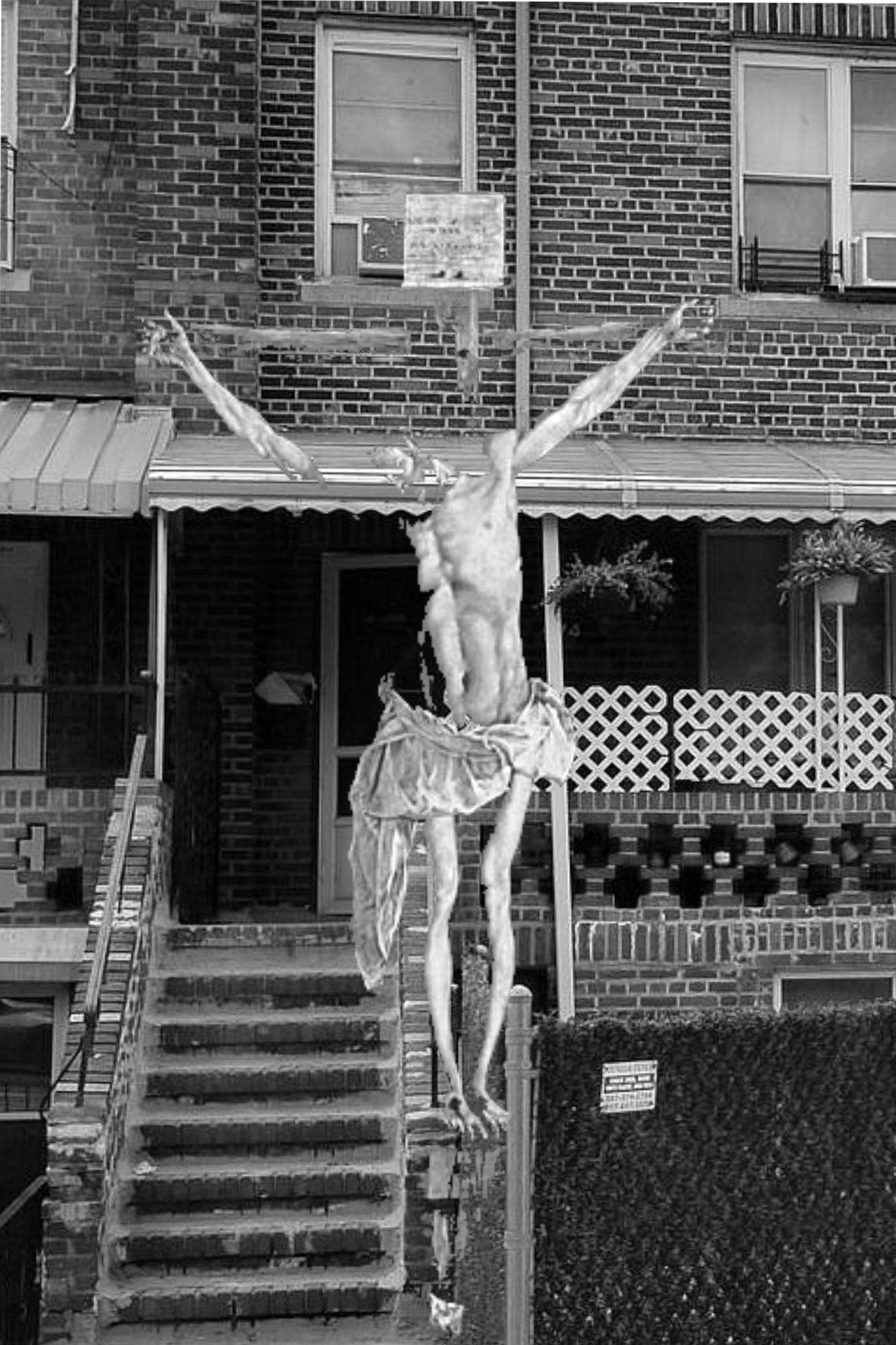 I remember a door made of orange and brown beads. Not a door, more of a curtain. It was the entrance to the house once you were in the tiny foyer, which was where we all left our shoes. Above the doorway was a green hued Christ looking down from his cross, his dead flesh guarding my grandmother’s home. It’s the first thing I can recall making me afraid. Whenever my parents brought us over to visit, I would try not to look at it. I’d still catch a glimpse, though, and I think I wanted to despite being too young to understand the impulse.

The house smelled funny. We’d usually go for Sunday dinner, so there was a tomato sauce mask over it. Underneath the oregano and rosemary, the air was stale. Completely still. Thinking about it now, it’s because she never opened the windows. Behind the blinds, the glass was caked over with dust, keeping the sunlight out. The house felt subterranean, as if buried under ash, despite looking like every other modest, single family house on a corner in Bensonhurst.

There was a dog bowl in the front yard, but there hadn’t been a dog in years. Much like the baby cribs in the basement, the locks of hair, the teeth. Reminders of what used to exist before the ash settled, slowly accumulating while no one seemed to notice.

The first time I was taken to the birthday party, I was eight or nine. My parents had somehow gotten me out of it until that point, but for whatever reason my father finally acquiesced, and my mother treated his word as final. The first birthday party occurred when I was three and I was left with my mother’s parents for the night. For the next five or so years, this remained the arrangement.

On the car ride over to my grandmother’s house, my mother said to my father something to the effect of do we really have to subject him to this. Or maybe it was can’t we spare him. My father didn’t appreciate the question.

Spare him from what? Subject him to what? His grandmother who loves him. He has to learn some time.

Maybe this exchange didn’t happen at all. I didn’t even remember it transpiring until many years later, which leads me to suspect I subconsciously invented it as a coping mechanism. Does it really matter?

We got to the house. Shoes off, the corpse above the door, don’t look, hi grandma. I’d always see my grandmother first. This was the rule of the house. You find her in the kitchen and kiss her hello immediately. That’s respect. My grandfather sat in the connected dining room. We would kiss him hello second. Beyond the initial greetings, he would maybe say another fifteen words combined the rest of the night. When he died, I was shocked anyone could come up with a eulogy.

I went into the dining room to greet my grandfather and noticed birthday decorations hanging up. I turned to ask my parents whose birthday it was, but they quickly shooed me away into the living room to watch TV. My father stayed talking to his parents while my mother sat me down in the recliner and turned on PBS.

Tonight’s going to be a little different, she whispered to me. Just smile and do what grandma asks to make her happy. She’s feeling sad. We’ll talk about it later.

Mr. Rogers was playing on the TV. Whenever we were at my grandmother’s house, I was infantilized. This apparently was part of keeping her happy. The living room was close enough to the kitchen and dining room that I could still hear everyone talking.

Ma, what are you doing, my dad said loudly while gesturing towards stacks of newspapers that were about to block the entrance to the bathroom.

Oh, leave them alone, she said. I’m going to go through them this week. Daddy will throw them out.

These have to go, ma. If they fall over, it’ll be a huge mess. This is weeks of newspapers. You don’t need them.

I said leave them alone, Jimmy. There might be some articles in there I want to keep so I can read them later.

My father threw up his hands and went into the bathroom. My mother was trying to make conversation with my grandfather, but he wasn’t giving much beyond how alright he feels and how he can’t complain. My mother called into the kitchen asking if she could help, but my grandmother said she was fine, and dinner would be ready soon.

Now, if only Nicole would show up sometime this year.

My aunt Nicole arrived about a half hour later as my grandmother was plating dinner. My father was out in the yard cleaning up garbage that accumulated since our last visit. She dropped the birthday plates she was tasked with bringing over on the table and went out back to see him. I didn’t get a chance to say hello.

Come in and eat, my grandmother yelled, and they came in from the backyard. My father looked annoyed with my aunt, gesturing to her eyes. She laughed and put some drops in. We all took our seats around the table. I sat between my parents, my grandfather and aunt across from us, and my grandmother at the head so she could easily get up to reach things. Across from my father was an empty seat with a place setting. Pasta bowl, flat dish, fork, knife sitting there waiting. I thought about asking who else was coming, but then I remembered what my mother said and kept quiet.

After my grandmother placed the pots full of food on the table, she went into her bedroom. My grandfather looked in the direction of the room but didn’t get up. My aunt asked me how school was. I said it was ok and that I was enjoying math. She said that’s good and I’d be a scientist someday. I did not end up being a scientist.

My mother was beginning to talk about something she saw on TV when my grandmother came back holding a large bust of Padre Pio. My grandfather let out this moan without opening his mouth. My father nervously rubbed his hands. She put the bust on the table and placed a photograph of a young man against it.

My grandmother asked me with a smile, you remember your Uncle Giuseppe, don’t you? Uncle JoJo?

I felt my mother lightly squeeze my knee. This was the first time I intuited what something like this meant. I lied. I said I remembered Uncle JoJo. My grandmother’s face lit up and she said of course you do.

How he loved to play with you when you were a baby. Today is Uncle JoJo’s birthday in heaven. He is 37. I know that must sound old to you.

My grandfather moaned again from his throat. My aunt adjusted herself in her seat.

My grandmother continued, a smile on her face despite the tension growing in the room.

I’m sure that sounds very old, but 37 is young. Very young to be having your birthday in heaven. He left us when you were just a toddler. But he’s here with us today for his birthday party.

She gestured at the picture leaning up against Padre Pio’s head. The eyes were all pupil. Uncle JoJo smiled in my direction, tanktop, Coney Island. The saint’s beady eyes stared out over him. Then I saw the meatballs go into Uncle JoJo’s plate and my mother cleared her throat. One by one, she served us our pasta and meatballs. Then we lowered our heads to pray.

Jimmy, you wanna do the prayer?

Sure, ma. Bless us oh Lord and these thine gifts which we are about to receive from your bounty through Christ our Lord amen.

My grandmother smiles at me.

Your father was never one for creativity. By the books, through and through.

My father grimaced and sarcastically thanked her. Then we ate. I answered more questions about school. My grandfather asked me if there were any pretty girls I liked and my grandmother shot him a look that silenced him for the rest of the evening.

My mother asked my aunt how the acting was going, and my grandmother snorted. My aunt ignored this and said she was doing auditions.

Do you remember that time JoJo came over in the middle of the night that one time we had a rat over here? He was here faster than you could believe. Locked himself in the bathroom with it and killed it with a butter knife. My grandmother said this at Padre Pio.

Everyone smiled and nodded. Yeah, that JoJo, man. He was something else. A real character. He was the best. So funny.

This continued on and on, my grandmother almost glowing like her precious saints. We ate and remembered my Uncle JoJo, holy Giuseppe, beatified, a shadow that I recall pushing me on a swing once. When we were done eating, my mother and aunt helped my grandmother clean the table. My dad left to go finish cleaning. He reached for the newspapers on his way out the back door, but he was caught.

What did I tell you, Jimmy? Put the damn newspapers back. I’m not done with them.

Ma, come on. There’s crap all over this house. I’m trying to help you.

Crap? Crap? That’s how you talk about your mother’s house? This is who I raised?

My father threw the newspapers down and went into the backyard. My grandmother smirked.

His whole life he’s thought who he was. Real tough guy, she said to my grandfather who sat there doing nothing and didn’t react.

I was sitting in front of the TV. I didn’t know what I wanted to do. Cry? Maybe just scream. I couldn’t process these interactions.

After a few minutes, I went back over to the table and sat there in silence with my grandfather while my aunt was putting out the plates and utensils for dessert. They were paper birthday plates with pictures of confetti and candles. My mother had gone outside to talk to my father, I figured. When they came back in, both looked like they had just composed themselves. I looked at Padre Pio. I thought about the holes in his hands. My grandmother had shown me pictures of his stigmata when I was even younger. My mother wasn’t happy about it.

She showed me the holes in his hands as she told me that Padre Pio appeared to her during the birth of her children. He was still alive at the time. This, she claimed, was one of his miracles. That is why he became a saint, though he was the patron saint of the family long before the church officially recognized it. And now his head was cradling my dead uncle on his birthday. My grandmother’s voice came from the entrance of the basement. She said she was ready.

She placed the cake down in the middle of the table and looked at me. Why don’t you help Uncle JoJo blow out the candles?

I didn’t move. My father looked at me sternly. It meant nothing to me. Something had changed. My mother touched my arm and I said okay. I leaned over the table. I thought that you had to make a wish before you blew out the candles on a cake, but it wasn’t my birthday. I closed my eyes and took the dead man’s wish. When I opened them, my grandmother’s orange face was looking at me with suspicion. I took a huge breath, puckered my lips, and then I couldn’t see her face anymore.