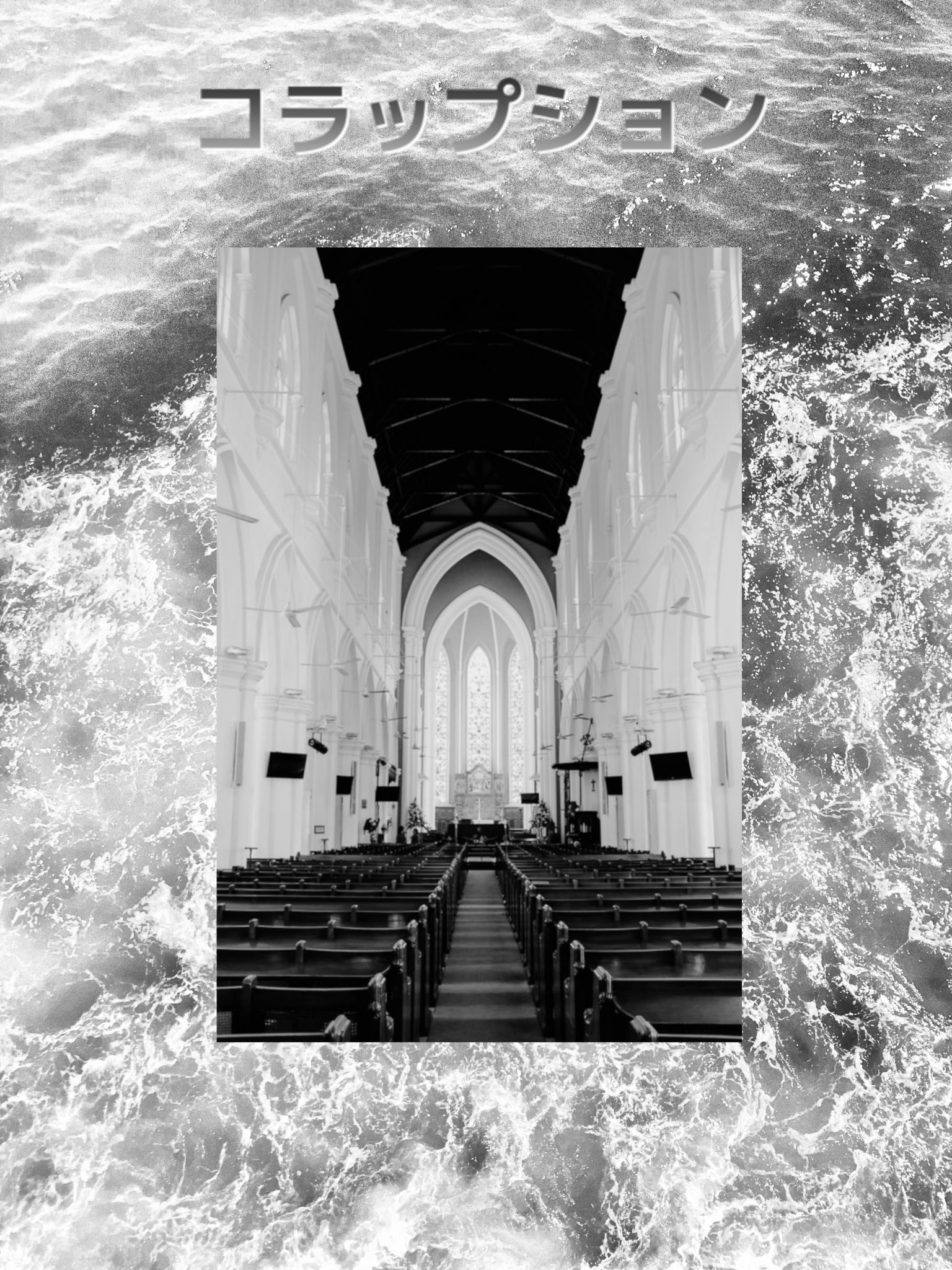 The Hospital complex is visible through a line of stunted trees planted on the other side of a drainage ditch. The water is orange and black, filled with things that ought not to be alive. This thing, this us/er.

Pet’s lips moisten the end of an elegant glass retort. She says she wants it, wants to do it, for me – publication be dammed! This Thing wants to die.

This I, S/he or it (the Thing) which Uses wanders across depleted, poisoned earth. Around us rusting pipes coil round the inert chimneys and gantries of the W Steelworks.

I look down into the ditch’s lugubrious stream of unlife, scoop up the heavy metal soil and fill my mouth and belly slit, curious about what I can metabolize.

Maybe we’ll both die for good this time. I strip, crawl down into the stream, a slip of a body hooked over the edge tonguing the sluggish water. The unlife reaches out in a metaphony of wheeled urchin bodies, intricate molecular machinery mating with my own. Its wave of poisons ratifies me, makes me hard, anxious, determined.

I rise, replace my clothes and look over the tree line towards the ancient Rotunda’s slate grey anatomy, filling sky like colliding moons, surfaces straited and pocked with ornate arches and cracked stone entablature.

Rickety tramways run through sparse, intermittent woodland and hermetic suburbs ferrying a few patients at a time, happy on their junk, furtive about their involvement here. They decline interviews or queries regarding an institution that, to all intents and purposes, serves no one.

I see them mature, trailing opiate drips and monitors round wards, rapt by their new-born, speculative anatomies. Aside beatific suffering, their faces radiate a planar commitment to momentum.

We prefer to think of them as collaborators. Each a former life with its conatus, a senior Promethean once informed me: vessels stitched from skin, bone and gut, suppurating basal tumors, piercings of bamboo.

They entice nearby objects: doors or telephones, stagnant water. When entangled, they are transferred to the new Suicide Wings around the Rotunda: cinder grey blocs, reminiscent of the old Units but larger and less prone to ‘breachers’.

We know enough of your father’s work to imagine what they contain. The puzzle is in why as much as how, Pet says.

I’m in the office at the back of her lab. She gasps as I close my hand around her throat, stroking her vulva with the retort.

The Thing that Thinks hypocritically insists on a safe word. But our limits are my forbearance. There are old weeping incisions between open thighs, cigarette burns the color of memory. This Doll.

The Rotunda bulks above single floor prefabs – maelstrom grey falls under perpetual skies, condition vertigo. The ground doors are covered, only the oculus at the tip of the dome allows unfettered access. That which cannot be seen or attained from the ground.

It is perennial, preexisting all landscape. The Ys Matriarchy’s surveyors and officers noted it in passing but rarely ventured near, no doubt warned away by the Karakali priests.

The landscape flows around it like water slipping from forest to scrub to steelworks, the skirting of buildings that now postdate the Hospital. Unreal. Perhaps that is why attempts at dating the Rotunda produce inconsistencies. The dreamed cannot measure the dreamer. Nessa speculated it is a transcendental camera, objectifying and maintaining us in being. It draws our world within it when we die, archived for the Rose’s delectation. Perhaps the Matriarchs were wise to avoid this place.

Until recently the Pet Specialist was concerned for my disease which appeared to be doing quite poorly. I should be dead, like the failed Inverts who never entangle and transition to Suicide, not malingering and dry as a day patient.

Once, I scrolled through images from the birth graves I kept from Rigger’s old house on my phone to better illustrate the thesis to her. If we are not dead, it does not follow we live you’re squirming up from the ground, gagging on stones and roots, the world soiled, molten, hasn’t yet become about anything.

That judgement remains after you come to terms with being a monster. But we do not know what is dissembled in your casuistry; too tempting and early to call it joy or ecstasy while ‘affirmation’ is such a neutral term – a philosophical flip worth even my contempt.1

Let us not be so desperate to end up here. One could say we are nothing, are quick. Nothing by virtue of our unconventional modes of reproduction – the dissemination of outer forms is the face of the ratio essendi not hidden behind them but unknowably quick, without stability; an empty factory where undead novelties preen gain for visibility.

My q-body is a tomb, do this all the time suck it up and fashion exploits in ways you may not countenance – though who knows what your current ellipsis favors with those futures waiting in line.

You have left me tenuous freedom. That entailed vision and temperance on your part. This user.

Be hospitable. The disease, it makes you up.

So our relationship affords some latitude and it is not only my political associations with you. My bodies and iterations have rare, sought-after matter like ancient fallout tech. I convince Pet to get me past the Clinical Dead Zone, into the deep. Outwardly demure careerist co-opted by unlife the Wesen-storm she likes to call it. It arouses her to pretend I corrupted her, an enticing alibi since it affirms and disavows us.

I think she just wanted to die for someone, without tangling up with tiresome ideology.

Social media circulate our conversations and cam-intimacies around the Hospice Crypt along with lurid images of the most grotesque inverts. During ward hours I see you or some demimonde flunky shadow me. Yesterday’s Spook in a long green coat and black trouser suit, a black bag, bladed oriental demon batique, a doll with living eyes recessed under bone.

Today Anna dances en pointe in a courtyard by a dried stone fountain in the outer gardens. Heavy scarred legs and painfilled body become light of the dead fountain, proud of her pending accomplishment.

Pet walks ahead purposefully, fired up by the whims of a treasured specimen. She passes by a radial corridor blocked by a mound of fine cheese-colored grains. Insidious particles swilling and subtly contesting boundaries.

Never commit to the moment. Our present, trace, inscription. We feel the drag of stone pile us out this retroactive firmament.

She waits at the junction of another radial by a barrier staffed by bored creeps in crumpled blue uniforms and oily masks that adhere to their faces. Beyond the corridor saturates into black, its visible area littered with plastic containers for sterilized equipment, discarded swabs and gauze, pharma packs, more of the ambulant yello grains: matter dogged with path dependence, thought, the self-perpetuating idea, another ground. The Creeps waive us through, chuckling, handclapping when we go.

Philosophically inclined to decentered emergence, the Prom Presidium inexorably disappeared itself. Senior medics like Pet now depend on anonymous and unattributable doctrines circulated in the buds and extensities of the Crypts. Techne became hyper-magic, modernity a retcon of ante-modernity, a different locality, without breath or flesh to remember ourselves in after we die. The secret of the Djinn is that they do not wait and are not forgotten. Crypts require keys or decoders. Some do not exist. Others are evental and unanticipated Ratsingers.

She is protective of my unrealized potential and understandably devoted. She relishes a specified body servicing an unspecified future. Her martyrdom has featured in multiple encrypted myths and an experimental documentary on the anagrammatic futures purposed in the Presidium.

We proceed past evacuated labs and wards, into the space of whispers.

She attempts to light a match but the air is slippery and stifles flame. There is furtive movement and chitinous flows of grain larvae pressing in new, unexpected directions.

We are not returning to the barrier.

Pet is laughing. I have rarely heard the passionate increments bloom in her so. I hear two inaudible words as through a delay line, like many mouths masticating in and out of phase. In some I tell her. In others she passes the news through intermediaries who faintly resemble us.