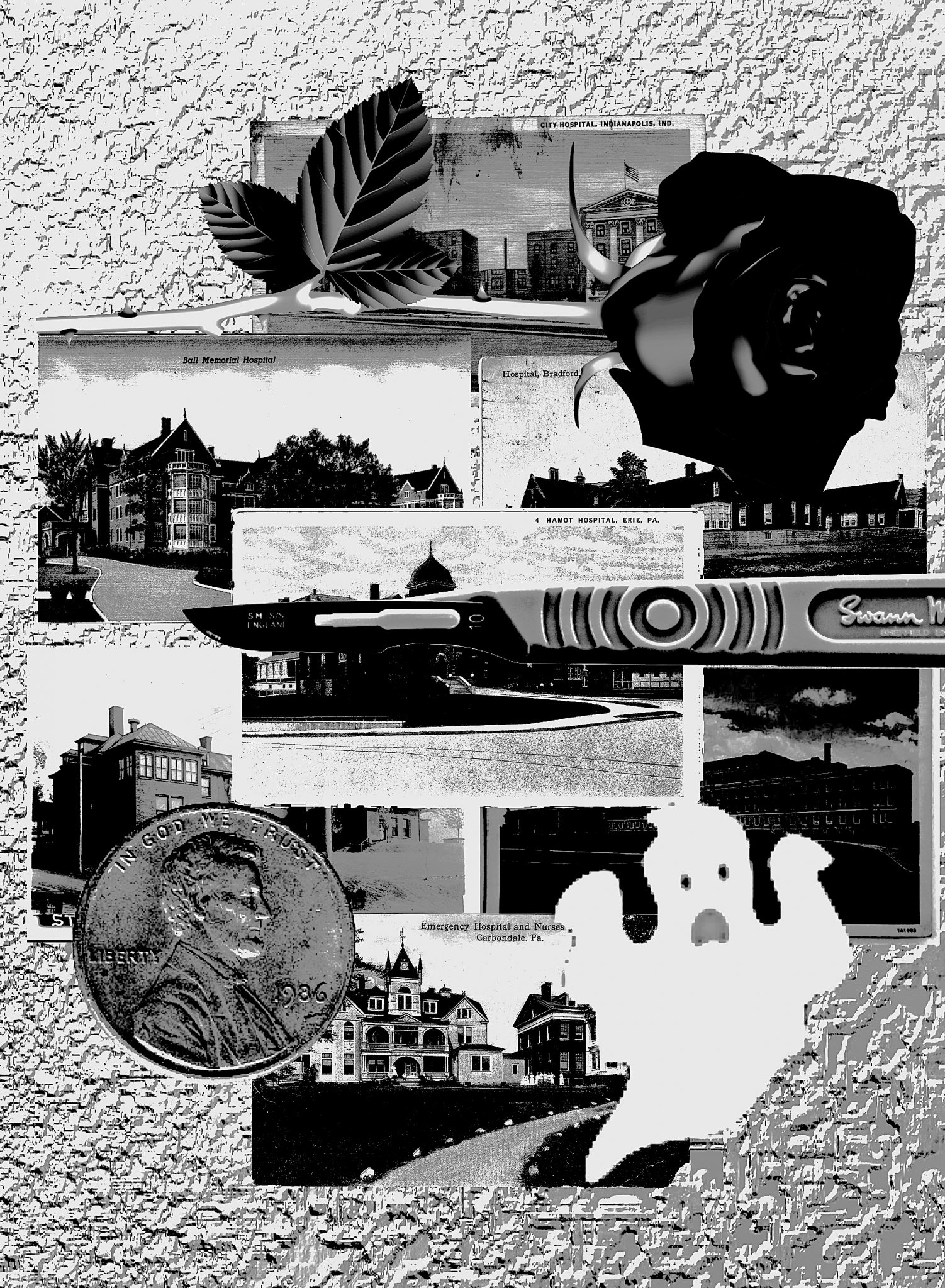 In the first hospital you are shackled to the bars of a rolling bed in an underground catacombs. They remove your clothes, jewelry and wristwatch and draw diagrams on your skin with permanent marker, circling your tattoos and connecting the circles in a constellatory map that covers your body. You know that if you followed the directions on the map it would lead you to your home, but you can’t see the map in its entirety, since parts of it are drawn on your back, shoulders, head, and neck. In any case you do not possess the kind of vehicle that would be necessary to follow such a map. You worry that the map may fall into the wrong hands. You have heard the staff whispering amongst themselves when they thought you were sleeping. They refer to you as “the terrorist.” Many of them glare at you in open disdain. There is only one nurse who treats you with any kindness. At times the nurse appears as a human of Afro-Caribbean descent, but at others she more resembles a large bipedal canid, with smooth black hair and a snout full of sharp fangs. The nurse visits your bed from time to time to ask if you can remember your own name. You feel your mouth open and close, though the motion seems disconnected from any power of will on your part. No sound comes out.

The second hospital is full of patients, but the staff have all gone home for the night. The patients are strapped to rolling beds side by side in a cavernous pit, all of them writhing and howling in anguish. A powerful current of dark energy snakes from bed to bed, slithering into the brains of the patients and creating a hallucinatory network of shared images. These images hover in a shimmering luminescent puddle overhead, melding with the flickering fluorescent lights. Eventually the patients discover they can summon physical manifestations of the images in the puddle using a pattern of howled ululations and grotesque, humping hip motions. Soon all the patients are howling and gyrating their hips towards the ceiling in unison. You wish you could stop yourself from participating in this ghastly ritual, but are powerless against the accelerating inertial circuit of shared bodily consciousness. Soon cigarettes, gold coins and sandwiches rain from the ceiling and onto the beds. The patient in the bed nearest yours holds a cigarette between his lips. When he lights it, the flammable gas in the hospital air ignites. Flames fill the room and the building explodes.

In the third hospital all of the patients are dead. There are six dead patients in each room. Most of the patients have suffered immense bodily trauma, as if eaten from within by fungus or poison gas. Their limbs and faces are swollen two to three times the normal size, their bodies covered in pink and purple boils and contusions. Wet blisters fester and ooze while tangles of gangrenous organs hang suspended from open, dripping pustules. A deep, sacred silence hovers in the air. You lie as still as you can. If you were discovered here alive, it would be seen as a grave offense against the keepers of the hospital. A pair of nurses gossip at a small podium just past the chamber’s entrance. You tilt your head ever so slowly and strain to see out into the next room. The nurses are concentrating on something suspended above the podium, a floating electric orb of some sort. They caress the orb with their hands and speak in a hushed whisper. You glimpse a large window beyond the nurses, the star-speckled expanse of black space visible outside.

The fourth hospital floats aboard a vast steamship carrying cargo back and forth across the liquid border that lies between two realms. Television screens broadcast the President giving thunderous speeches at all hours and in every room. Patients in this hospital are discouraged from speaking to one another, or even to the nurses. The slightest infraction will result in a patient being strapped to a chair and forced to watch the President’s speeches for hours on end. The President speaks of a hidden evil, a vast viral entity soaking through the porous border dividing material reality from the spirit realm. In the cafeteria an elaborate game of survival is played. Patients silently pass objects back and forth between their trays: chicken fingers, tiny plastic cups of butter, plastic spoons and paper napkins. The rules are complex and difficult to grasp. No one is ever certain whether they are playing correctly. Border patrol agents collect the losers and escort them to cryogenic holding tanks. Their frozen bodies will be used in the construction of a wall in outer space meant to protect the present dimension from the encroaching virus. One night an alarm bell rings, waking the patients. In a panic you attempt to remove the intravenous line from your arm. When you do so you find that the IV tube is indistinguishable from your vein. You tug as hard as you can, finally dislodging the vein itself from the flesh of your arm. You examine the vein and find it is cold and stiff, like plastic. It contains no fluid. A pair of orderlies burst into the room. As you squirm and cry out in pain the orderlies pin you to the bed and inject you with a sedative. As punishment for your infraction you are sentenced to seven days solitary confinement.

The fifth hospital is an altogether more lively place. Each patient has his or her role to play in a spontaneous yet perfectly orchestrated techno-gospel opera. The plot revolves around various patients’ attempts to secure control of the television remote. Alliances and rivalries develop as the patients, nurses and staff divide into several warring factions. There are numerous romantic subplots. Attempts are made at peace, with doctors and social workers playing the parts of moderators and neutral parties. Treaties are drafted and torn apart. Soon a complex system of espionage develops. No one is sure who to trust. The central figure in the opera is an oracular prophet known only as the DJ. He is morbidly fat and never leaves his bed. Seekers travel from around the hospital to ask him questions. He never answers a question directly, but subtly alters the music he spins from his turntables in response to petitioners’ queries. Various schools of criticism emerge to interpret the hidden meanings in the DJ’s music. A system of writing develops. To avoid all-out war an academic conference is held. Patients, nurses and doctors present papers and debate various theories. The hospital becomes the first-ever university.

The sixth hospital has a rather more Grand Guignol aspect. A menacing female doctor interviews each patient for signs of mental and physical distress. She performs invasive examinations of their bodies, stretching apart their various orifices with crude metal instruments. The patients attempt to evade and outsmart the doctor, but her inquiries inevitably result in diagnoses of psychological and physical disorders. Cures are almost always surgical. The doctor performs the operations herself, amputating limbs, drilling holes in patients’ skulls, and cutting out offending organs. Each evening she holds a somber dinner for the hospital staff where amputated and lobotomized patients act as servants. You are not a patient in this hospital, but instead take the form of a recording device in the shape of a bronze humanoid honeybee. You flutter to and fro, buzzing happily as you collect moving images of the hospital’s grotesque occurrences. These images are uploaded to a central repository where they are edited into televised entertainments for orphaned children and retarded people who live in other hospitals similar to this one.

The seventh hospital resembles something between a boarding school and a large country manor house. It does not seem to have a beginning or end. You wake each day confused and uncertain, half-remembered fragments of each previous hospital clinging to your imagination like berries to the vine. You wander the empty hallways and grounds, never seeming to enter the same room twice. Some of the rooms seem long abandoned, while others give the impression of having been occupied just moments before you entered them. On a certain day you endeavor to walk in a straight line from morning ‘till night, hoping to reach the end of the building. By midday you are exhausted, and no closer to finding the end. You encounter no one. Another day while walking the grounds outside you discover a method by which rudimentary flight is possible. Holding your breath and spinning around in tight, rapid circles, you float upwards into the air. Eventually you begin to feel lightheaded. You release your breath and stop spinning. Still you continue to rise. You look down at the hospital campus from miles above the ground. It appears to extend forever in all directions.