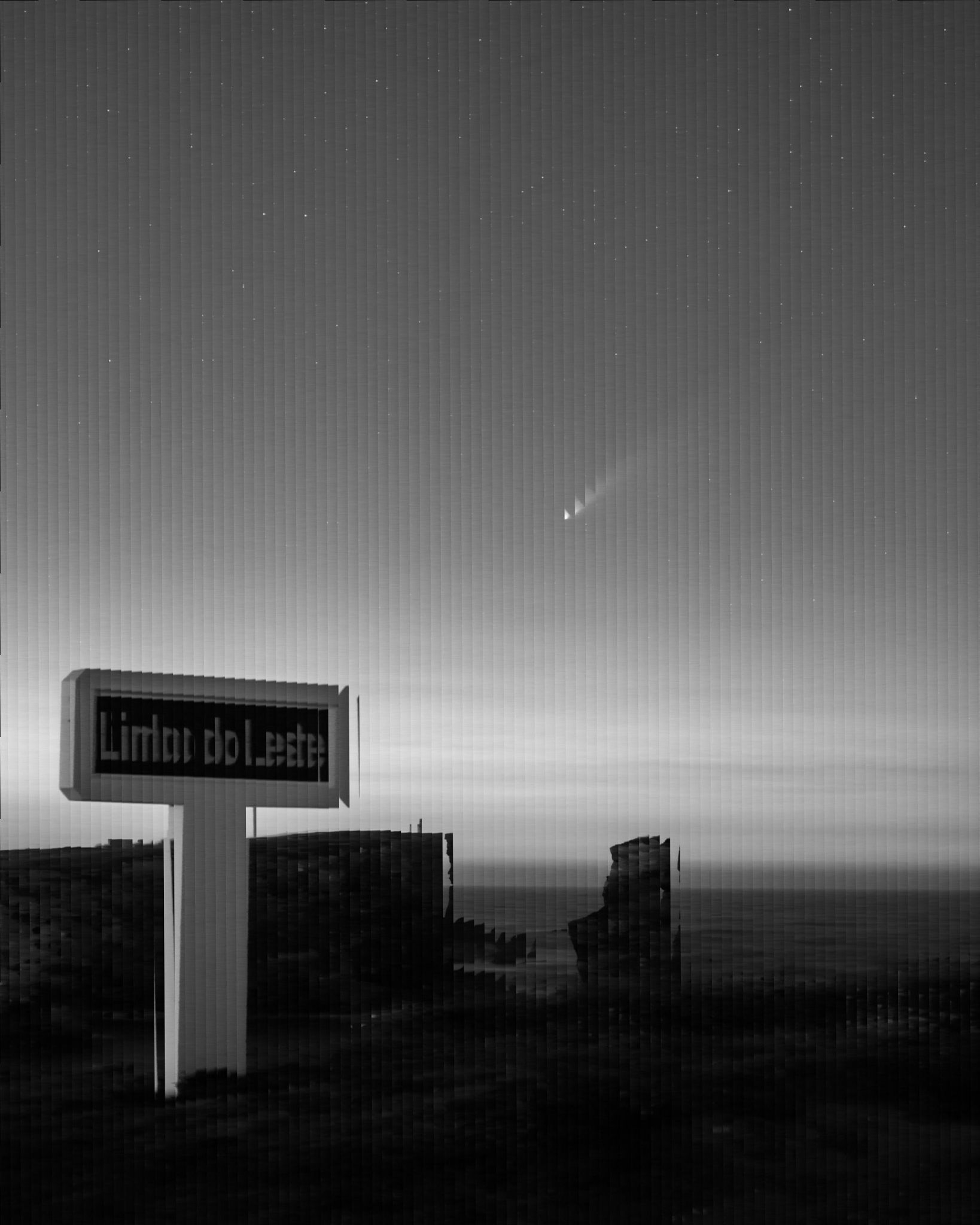 There was         , the Many, whom is not a who, and called by either Silence or Noise, but only heard in-between these two fake names.          was created as the reversed agglomeration of a thought, a thought coalescing the Many into a One (place) somewhere, and this happened after everything was already there, as the unmaking of a something. But          could not speak.          was mute – deaf, and blind, and tasteless, and touchless… yearning to see, and hear, and the whole lot,          set out to break both the Silence and the Noise of the Mute Screaming that constituted         ‘s being there.

Travelling what there was, itself, as the what-there-was travelling itself, like food travels through a digestive system by becoming part of the body,          did look like a comet, but one both seen from outside the observable universe and from inside the comet itself, as if one screen showed the comet zoomed-in and the other the gut-shaped ducts of vacuum of which it passed along zoomed-out.

If that was the key to          it was simple enough: just open a hole into something, and then it will come together. If          came from somewhere, or is the meeting place for many somewheres in one place, it is indeed simple enough: open the gates, lure the many-things here and they shall converge and take care of everything else, two shall be one to the other so that two shall be, we shall be one to the other, two I’s, I shall have a partner to look for. And thus loneliness, a need for reproduction, of sorts, the sheer want, created what may be called differently by many names, depending on when and where, but that here is simply to be called          and its upcoming partner.

Consciousness, Spirit, Mind, Thought, Gods, Death, Life . . . light, water, air, fire, earth, aether . . . but really just a friend was missing, one was wanted. The more interesting de-capitalized version of these words would come in one name, the name of an equal: *.

But          fucked up. This * was itself blown open into the fabric, as if a mutated – still alive – food, passing through stomach and intestines, divided in two, or hybridized with the insides, ripping the organs themselves open into the body, a leakage of the insides, all mingling, a mess.

The * affirmation, its existence, was suicide incarnate, it was destruction made real. Not death, but annihilation itself, like a black fire consuming itself, fueled by whatever happens to catch it in its way. The most delicious food that forcefully enters the gullet only to self-destruct inside. The food became the predator, and the predator the food. Was          themselves going to become victims to their mindless partner’s madness? A friend that is the bringer of thought itself, of mind, of itself. What would even happen were that to be the case…

A rip into the rip. A rip that rips the rip, ripping, thus, itself – the double-ripping of a double-rip, superposed onto itself, simultaneously, like a dance that does not twirl or spin, but, gasps, rips – and as it rips, it ripples, through everything as it becomes everywhere and everywhen, and, as everything was already there but not expressed – since that came after the Meeting of          and *, everything emerges as a dance of these two, a performance, but one that was already there in the Many, waiting for its characters as a play waits for its actors, but that nevertheless exists beyond, before and after, the actors incarnate the characters and the characters spurt themselves.

From        and *, ******* was born. A tear that is not an offspring, and especially not of tragedy, nor tragicomedy, but that constitutes intercourse itself, the eternal fucking of two, the multiplying-back from Many to One and from this to Many, an eternal dance of one into the other.

If I say that Space is a tear in Time, a leakage, would it make sense? Time and Space are concepts that supposedly escape this paper, but they barely mean anything. That is the depth sacrificed for the extension of their surface. They are dependent upon a subjectivity that compares an internal comprehension to the one being expressed. The real, or the most of the real, implicit meaning, loses itself in the rip, in the tear of the words themselves. Now, if I punch a hole in this paper, or force a blank duration, a monster is created, a hybrid from these two, that is also the progenitor itself, the Many that is imagined as separate, divided into a dual operation that has to act upon one another for the assimilation of their potential to what there was before them. And who I am? A tear in the tear, exactly superposed, I appeared – I don’t know why – and explained the tear itself, but, for this, I teared the tear, I am a double-tear, a tear that tears. But who am I, really? Ironically I come from a seemingly natural progression from simplicity to complexity, but that is the gist of the joke.

The me and you problem is simple enough: you are, like I am, another tear of a tear, and together we are… no, it wouldn’t work. There is no way to know if there is more than one          and * to form you as there was to form me. But if          and * are the roots of me, and they are unique, and they didn’t make you, what is you? Are you really possible? Am I, after all, the eternal fucking of my progenitors alone in whatever there is, simply imagining you to exist because, like my progenitors, I am lonely, even though I am literally sex? But how can an in-between tear imagine anything, if my simple existence is the cancellation of what there is…

We are the in-between two tears, from this we, you and I, appeared, or from you and I, we appeared.

Them is different from us. Them is not that which is ripped after the rip ripped itself. Them is what cannot be ripped by us, what is there when we just fail in trying to cut that which lies beyond emptiness.

What about they? They are Them.

What would happen if they hadn’t me?

A mother that does not want her child. A womb that rejects its forming body as a parasite. Don’t you want justice served? Won’t you defend the poor soul?

Then speak up! Plead, for the child, for all of us, for Justice, for you that have a voice to speak – profess and plead, speak up!

“O mother! Your child – your son – pleads for you. Nurture with your nature, cede a breast to the suckling. If you are, in any way, bound by love, you must do so! If you have that in you, let it act upon you and change the ways of your body – and do not let the seed fall!”

The child is voiceless, be its mouth. Feel the pain, be the gate between worlds – through words, articulate what you, what no one, can see. Hear the silence that awaits. In life this is your mission, your whole reason, your astrological sign, your star. Follow it, be the comet, burn yourself moving, break the axis. For the child.

Yes… for the child…

Then speak up, man, speak!

“The child! For the child!”

“When the Oreille swells and the sinuses smell – no, isn’t it the other way around? In any way, when the phlegm blocks the orifices, nothing exits, or is it exists, but do comes in the energy, the miasma that inflames the spirit or rests unseen all around. In the murky waters, it is clear now. Death is alive. Or is it that Life is dead?”

“You know it. Rambling again.”